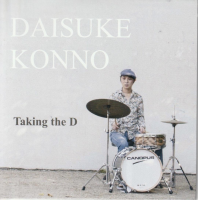 Choosing material for his first album, Taking the D, melody came first and foremost for Japanese drummer Daisuke Konno. He says: "I picked songs with beautiful melodies because I wanted as many people as possible to enjoy my music—not just jazz lovers."

Konno's musical odyssey from Tokyo to New York City began with the Beatles. "I was 13 years old and my mother had a Beatles compilation album. I started copying Ringo's drums. Drums were the only instrument I could understand as a teenager."

Then he heard Philly Joe Jones playing as part of the short-lived but enormously influential 1958 Miles Davis sextet that made the album Milestones (Columbia, 1958), with John Coltrane on tenor sax and Cannonball Adderley on alto. The track that really sparked his interest was "Billy Boy," on which all the horn players drop out, leaving the number to pianist Red Garland. There follows a passage where Garland trades fours with Jones. Konno says: "His playing blew me away. That was when I knew I had to be a jazz drummer."

Taking the D was made in New York with Bruce Edwards on guitar, Ben Paterson, piano and fellow countryman Nori Naraoka, bass. The quartet take a seemingly effortless, in fact highly professional romp through eight numbers, bookended by two Konno originals, the opener, "Talking to C" and the title track on which they bow out, luxuriating in the joy of a job well done.

In between Konno looks back down the years to 1966, 12 years before he was born, to tip his trademark cap to the Beatles with the Lennon-McCartney song "Here, There and Everywhere."

Konno is left looking to the future, one foot in the Land of the Rising Sun, the other in the U.S. of A. "A musician's life is harder in New York because of the increased competition but I have more fun there," he says, "America looks like the way ahead to me."

Talking to C; Bluesette; Someone to Watch Over Me; Sunny; Just Squeeze Me; Bewitched; Here, There and Everywhere; Taking the D.