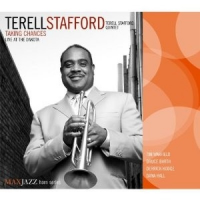 Trumpeter Terell Stafford began a very successful association with MaxJazz with the release of 2003's New Beginnings. He follows this up with a live outing recorded at the Dakota Jazz Club in Minneapolis, Minnesota. Stafford has a super talented quintet in tow, consisting of saxophonist Tim Warfield, pianist Bruce Barth, Bassist Derrick Hodge, and drummer Dana Hall.

The recording kicks off the a Spanish-flavored Stafford original, "A Nick off the Mark, where Stafford plays tartly and allows Tim Warfield eighty acres of solo room on soprano saxophone. Bruce Barth's near jazz standard "Pegasus follows, providing a waltz-walking tempo vehicle for Stafford and Warfield, who solo with great attention to detail. Stafford engages a lengthy "Taking a Change on Love a vehicle that proves to be a considerable workout piece for the band and audience alike.

A modal "Jesus Loves Me that segues through an inspired "Indiana quote into John Coltrane soprano saxophone territory serves as the disc's highlight, with spirited soloing all around. Stafford and Warfield doubling on the melody place this traditional piece somewhere in the stylistic triangle of Bobby Watson, Horace Silver, and Michael Brecker. "Blues for J.T. definitely recalls late-'60s Lee Morgan. Tim Warfield's "Shake It for Me closes the disc on a funky note, allowing the two front men to pinch off notes as if they were molten metal while the rhythm section bangs out an industrial offbeat. Taking Chances finds Terell Stafford carving out his place among the crowded field of talented trumpeters.

Nick off the Mark; Pegasus; Taking a Chance on Love; Jesus Loves Me; Blues for J.T.; Old Folks; Paper Trail; Shake It for Me.