Dom Minasi: Takin' The Duke Out 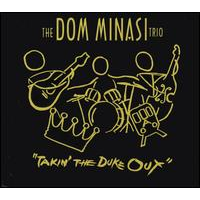 What's the best way to artistically interpret the musical creations of former jazz masters? Many current day artists have given musical tributes which have resulted in merely carbon remakes that reside safely in the boundaries of the original intents. Purists would claim that sacred music canons should not be tampered with frivolously; while experimentalists proclaim the timeless mantra of jazz: self expression though improvisation. Guitarist Dom Minisai's latest release, Taking the Duke Out, displays the very essence of that call. It was recorded live at the Knitting Factory in NYC. Mr. Minasi deconstructs six very familiar Duke Ellington selections and transforms them into his very own ideas with the help of his talented trio consisting of Ken Filiano on bass, and drummer Jackson Krall. The selections are treated with the utmost respect by the artist, but are uniquely revisualized. At many points in each selection, the popular Ellington songs are totally unrecognizable from their melodic origins. This may be disconcerting for many fans, but those who are opened minded adventurers, will be treated to a live trio that performs with skill, intensity, and spontaneity. A prime example of this is the tour de force selection, "Take the A Train," which starts with a dynamic and eerie bow solo from bassist, Filiano. The melody is then introduced and expanded into areas that allow for freedom for each musician to contribute their own musical expressions. Minasi's style is expressed in flurries of rapid chords and solos. Drummer Jackson Krall keeps the rhythm in check from the beginning and moves in and out with percussive energy. All musicians converge together where the melody smoothly reconvenes and is again dismantled. The whole concept works within the dynamics of the live setting and a talented trio that is bold enough to approach the great Duke Ellington's music in their own way.

Satin Doll; Don't Get Around Much Anymore; I Got It Bad and That Ain't Good; Take the A Train; Solitude; It Don't Mean a thing If It Ain't Got That Swing (Total Time: 53:44).