By GLENN ASTARITA
October 24, 2011
Sign in to view read count 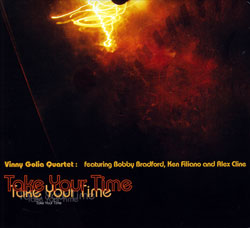 The third recording by this venerable Southern California ensemble yields an abundance of rewarding factors. First, it's a superbly recorded audio engineering process that adds to the depth and nuances of the program. Second, multi-woodwind artist Vinny Golia and his band mates hit their stride in prismatic fashion.

Unbound by borders, the musicians' have helped formulate the West Coast musical aura, evidenced by the successful output of the Cryptogramophone and Golia's Nine Winds record labels, with a lineage tracing back to pioneering clarinetist John Carter and pianist Horace Tapscott's sessions for American and European record labels. In the liners, David Wight adds a historical anecdote by reaffirming the injustices afforded to Bobby Bradford, Carter and Tapscott due to lack of press and marketing recognition. In many respects these artists lit the torch for the modern West Coast era, carried forth by Golia and a younger generation of students and improvisers.

Golia and cornetist Bradford's playbook casts a manifold sequence of events, where brazen firepower, spiraling choruses, and ominously designed dissonance bear multiple contrasts throughout. The quartet perpetuates a thrills-per-minute spiritual reckoning of sorts, with impassioned exchanges—instilling a commanding and largely intense set of frameworks, spanning loose groove dialogues and a host of subplots, veering towards an endpoint.

The soloists use space as a vantage point, and Golia's use of multiple saxophones assists with shaping a host of contrasts, abetted by razor-sharp phrasings and soulful underpinnings. At times, the artists conjure a fire and brimstone outlook to complement several orbital occurrences via fragmented loops, exercised during hardcore free-bop motifs or fractured exchanges, leading to odd-metered unison choruses. With "On the Steel," a clever arrangement spawns an on-the-edge vista, supported by the soloists' blistering breakouts and reenergizing rhythmic sorties into alternating flows. However, the quartet blows it out of the water towards the finale.

Drummer Alex Cline and bassist Ken Filiano provide monstrous support. On the medium-tempo "Welcome Home," the musicians execute a blustery bop pattern with a powerful and fluid mode of attack, underscored by menacing intentions. Cline lashes out with booming polyrhythmic fills on "A Guy We All Used to Know," to lay out a swarming foundation for the extended horns parts.

Take Your Time equates to a rather symbolic musical statement by Golia from many viewpoints. His assertiveness and broad jazz vernacular intimates a restless pursuit, culminating a sub-division of numerous improvisational ideologies neatly packed into a cohesive whole. Count this enormously persuasive release as a top-pick for 2011; indeed, it's an integral listening experience for the progressive-jazz connoisseur.