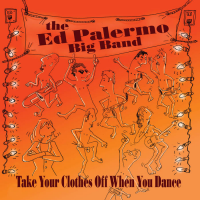 Ed Palermo first saw Frank Zappa performing in 1969, and that was to become a life-altering vision which would enlarge his perspective of what music could and should be. The fact that he migrated to jazz and picked up the saxophone while in university a few years later did not change the effect that Zappa wrought. He put the vision to good use, shaping Zappa's tunes for his big band. Palermo's first recording of the music was predictably called Plays the Music of Frank Zappa (Astor Place, 1997).

Zappa's music has been merged with jazz before, but Palermo brings in a distinct touch with his arrangements, which have a sense of adventure and a sly sense of humour. In doing so, he not only evokes Zappa's zany intelligence, he gives the music a tantalising body and a scintillating soul.

RDNZL lends itself perfectly to a big band arrangement. Palermo's chart opens the vent for five soloists and gives interplay and dialogue a place in the heartland. The ensemble lines of the horns are as smooth as silk, but the soloists cut a deep groove, led by Palermo, who nips at the melodic line on the alto saxophone. Charles Gordon is buttery on the trombone, a fine contrast made all the more evident when Palermo returns. The constant change of texture and pace turn this into a delicious treat.

A bit of funk from the organ of Ted Kooshian and the rocking pummel of the horns are fine harbingers of what is to come on "Gumbo Variations. However, Dave Riekenberg adds the essence: his tenor saxophone spews lines that are at first flinty, before they go into a trajectory, wailing and swinging and creating a host of flaming ideas. In comes Charlie Restivo rocking out on the guitar, embellishing his lines with feedback and reverb. The heat is on and it never cools off.

"Sleep Dirt has an Old World charm, the mood a showcase for Phil Chester. He plays the soprano sax with the gentle air of a minstrel and does not let go of that pulse, even as the other horns churn the tempo. Yet he has an ace up his horn, unleashing a turbulent blast when the brass comes eddying in again.

Palermo shows that a big band and jazz can do credit to Zappa—and do it really well.