By CHRIS MOSEY
September 8, 2015
Sign in to view read count 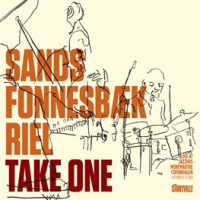 In October 2014 pianist Christian Sands, a protégé of Billy Taylor, known mainly for with his work with bassist Christian McBride's trio, played two nights to remember at Copenhagen's legendary jazz club Montmartre. The highlights are captured on this Storyville double album.

Sands plays with (rather than is accompanied by) phenomenal local bassist Thomas Fonnesbæk, nowadays often compared to the legendary Niels-Henning Ørsted Pedersen. On drums and not getting too much of a look-in, solowise: Alex Riel.

Fonnesbæk elevates the role of the bass here to that of front-line instrument. On Bobby Timmons' "Moanin,'" which opens Disk Two, he boldly and rhythmically shouts (rather than states) the theme before Sands comes in with a pianistic tour de force as virtuoso as it is soulful.

Christian Brorsen, Jazzhus Montmartre's musical director, said of Sands & Co.'s improvisations: "Time and again you find yourself holding your breath until the trio—like a cat in free fall—twists and turns in the air and lands safely on its feet."

Sands plays only one of his own compositions, the busily lilting "Sand Dune." His primary concern here is an examination of his roots.

He pays tribute to mentor Billy Taylor by dusting off the good doctor's deceptively simple ballad "Lonesome Lover." It's not to be confused with the Max Roach/Abbey Lincoln number of the same name from 1962 with its catchy "Take Me Back Where I Belong" vocal refrain.

There's a version of Miles Davis's "So What" from the classic 1959 album Kind of Blue and a quite superb take on Duke Ellington's "In A Sentimental Mood" which contrives to sound both brand new and, at the same time, faithful to the original, which Ellington penned way back in 1935.

An interesting inclusion is Mary Lou Williams' "Syl-O-Gism," a composition she based on the Greek word syllogism, meaning a logical argument that applies deductive reasoning to arrive at a conclusion based on two or more propositions that are asserted or assumed to be true. All clear?

Take One is chock full of surprising twists and turns and live excitement as the audience waits for the cat to land: a great album.

CD1: Stella By Starlight; Lonesome Lover; So What; In A Sentimental Mood; Bolivia. CD2: Moanin’; Body And Soul; Sand Dune; Syl-O-Gism; Someday My Prince Will Come.