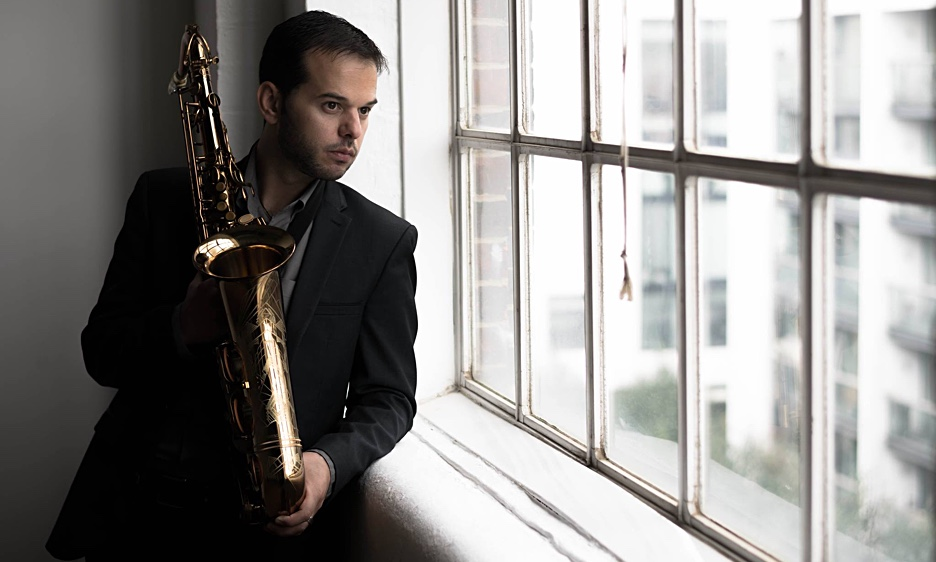 By VASILIS XENOPOULOS
May 27, 2019
Sign in to view read count
About Vasilis Xenopoulos

Saxophonist, composer and educator Vasilis Xenopoulos is one of the most accomplished Greek jazz musicians of his generation and a genuine representative of straight ahead jazz. London became his permanent home after graduating with honors from the Berklee College of Music in Boston and gradually established himself as one of London's up and coming jazz saxophonists. He has worked with some of the best musicians of the international jazz scene as a band leader, a section leader and as a guest soloist at various projects.

In 2009 he formed The Xtet and their debut album Loud City containing eight original compositions was released on 33Jazz Records in 2011. Two years later he released his second album The Wind Machine under the same label, which gained some fine reviews in the top British media such as The Times and BBC Radio 3.

In 2017 Nigel Price and Xenopoulos created the XPQ (Xenopoulos/Price Quartet) and recorded their first album under that brand, Sidekicks which celebrates one of the most successful guitar/saxophone pairings in contemporary jazz.

The Guardian praised him recently for being one of the leading examples of European jazz musicians who live and perform in Britain and bringing his continental element to the jazz scene. Further to that Vasilis has permanent collaborations with artists from Greece and Cyprus where he performs as a leader or guest artist on a regular basis. As a result he is permanently active in three different scenes/markets (British, Greek and Cypriot).

Vasilis' charismatic performances reveal his truly fabulous style thus his energy and passion interact with his audience. With his great talent, love and respect. He cherishes the instrument's challenges and pushes it beyond.

His credits also include seminars on Jazz Saxophone and Improvisation. Vasilis Xenopoulos is an endorsing artist of Rigotti Reeds S.A France.

I was blessed to have some great teachers in my lifetime. However, the three key figures in my career have been Takis Paterelis from Greece, Andy McGhee from my time in Boston and Eddie Harvey from Britain. I consider all three of them my jazz mentors.

I've got many influences but, if I have to mention a few, my top five would be Dexter Gordon, Hank Mobley, Sonny Rollins, John Coltranev and Sonny Stitt.

If I may rephrase the question... I knew I wanted to be a jazz musician when I was about fifteen! That's when I first heard the recording by Duke Ellington and Count Basie with their combined orchestras together for the first time! The sound of these two legendary bands was so huge that it had a great impact on me and I knew straight away that I wanted to be part of that sound!

The first album I ever bought was Blue Train by John Coltrane. I was really impressed by the melodies but I couldn't follow any of the solos, as I was too young to understand what Coltrane was doing harmonically. My second album was Go! by Dexter Gordon. Dexter was my first big hero of the tenor saxophone and the impact of his music on me goes way back to my teenage years. I can still sing along to all the solos from that album with the same enthusiasm I had as a kid. In the following years, there have inevitably been other influences on my playing, but Dexter remains my top inspiration when it comes to tone and melodic development.

Your approach to music.

I like songs and good melodies. Therefore when I improvise my intention is to tell a story over the harmonic sequence of the song I'm playing. So by default my approach to jazz improvisation comes entirely from a melodic point of view.

Whenever I teach jazz improvisation to a student I try to adapt my lesson based on the needs of each student individually rather than using a generic approach to everyone. We're all unique personalities and a good teacher needs to understand that the approach has to be tailor made on each student's needs. When it comes teaching improvisation I would say that is more organic than theoretical. For example I would make all my students sing a phrase before they execute it on the saxophone. This way I make sure that they hear that particular phrase in their head rather than playing it mechanically.

Music you are listening to now.

At the moment I'm going through a phase of revisiting some of the old masters of the tenor before the hard bop era, such as Don Byas, Lucky Thompson, Coleman Hawkins, Lester Young and Wardell Gray.

What is your greatest fear when you perform.

Despite the fact people think I've got microphone skills, I'm always afraid of saying something completely inappropriate especially if I'm trying to say a joke or something fully between songs!

In order for that to happen we need a good number of venues and festivals who will respect and preserve the jazz idiom. I also strongly support that any cultural organisations that have access to public funding should contribute towards the preservation of jazz and jazz education so we can carry on existing in the future.

My third album as a leader entitled Dexterıty, will be coming out later on this year. It celebrates the music and spirit of Dexter Gordon. It features Gordon's original compositions, classic jazz standards played "Dexter-style," and a couple of my own Dexter-influenced compositions. Another project that I'd like to happen in the near future would be an album with strings where I get to play some of my favourite standards from the American songbook.

I'd say Max Roach the legendary jazz drummer. I'm naming him as I watched one documentary about his life years ago and I was very impressed with his knowledge and his philosophy about music and life in general.