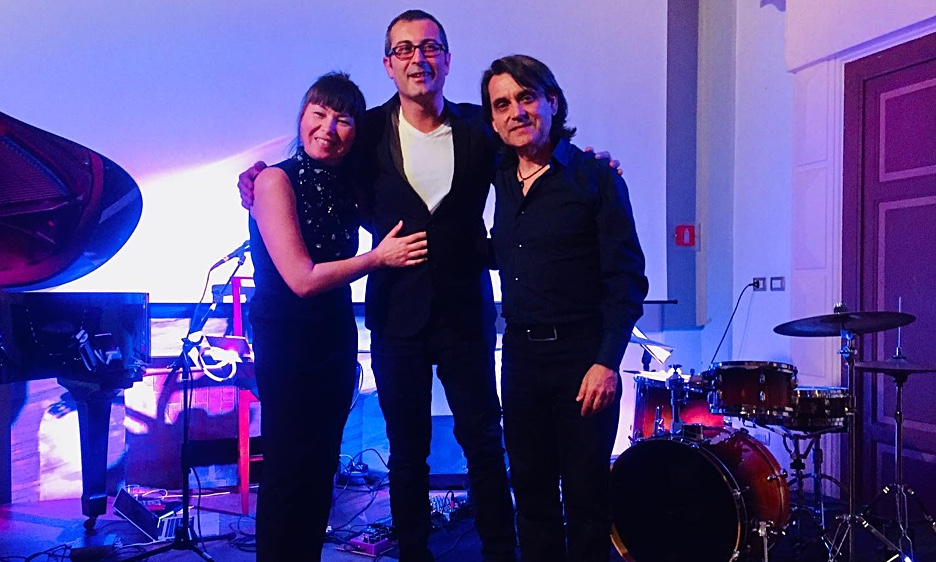 By LISIPI
June 23, 2019
Sign in to view read count
About Trio Lisipi

Sometimes jazz happens to you as something least expected. Exactly as it happened to Liliya Akhmetzyanova, the pianist from the jazz trio Lisipi. She started playing piano at age of six and, as many decent Russian pianists, graduated from a conservatory 20 years later. Then years of happy sight reading and playing classics by memory got suddenly interrupted by Silvio Canargiu—a guitarist, bassist, singer, composer, producer and such a handsome man. Yes, love happened, they got married and delivered their first baby—an album of original compositions Lisipi. Surprisingly, some of the tracks in that album are quite jazz. For example, you can hear themes and following improvisation. There you even can hear some "jazz" harmonies and rhythms, imagine that!!! Ah, by the way, a famous Sardinian drummer, writer and composer Pierpaolo Frailis was helping a lot in producing the album. Since then, the trio of all mentioned above musicians is called Lisipi. Li—Liliya, Si—Silvio, Pi—Pierpaolo. They love playing concert programs consisting of their original music.

All the music culture from early music to contemporary achievements has influenced us. And we may even haven't realized how deeply.

Liliya was a primadonna at the kindergarten, which she was attending till the age of six. With age, her voice deteriorated, but love for music remained.

Silvio, on the contrary, developed his vocals through the years. He started learning how to play guitar at age of nine, very much infatuated with hard and metal rock.

Pierpaolo is a phenomenal musician. He knew how to play drums before he, actually, held the drumsticks in his hands for the first time. Exactly like Mozart, who played violin straight away without preparation (as legend echoes).

We can't take away from our production Liliya's classical technic and manner of intonation on piano. As well as gravitating to melodic and developed phrasing. Silvio gives the improvisational spark to the trio. With him no take repeats another, which always challenges two other members. Pierpaolo is an infinitely flexible and constantly reliable member of the trio.

We are still trying to avoid such a responsibility as teaching. But if it's going to happen one day, we will focus on reinforcing belief in oneself and lighting the fire of passion and appetite for music (any kind of it, be it opera, baroque or rock).

Lisipi is a dream band. It is when all the members are put together by destiny.

And we would love to participate in one of the Pat Metheny's projects. For example, The Orchestrion Project.

In the program of one of our recent concerts was included a piece written by Pierpaolo Frailis. It was the only piece we had to read. On the way to the venue we found out that the score wasn't in our luggage. So we had to skip the piece that day. Later we found the score in the box of paper prepared for burning in fireplace. And a quote by Mikhail Bulgakov came to mind: "Manuscripts don't burn."

We love each and every venue we play at. As long as there's at least one spectator present.

So far we have produced two albums. One is about soundtrack music and the other is Lisipi. In Lisipi there is more interplay between us.

As we claim in the introduction to our album on CD Baby page, "We bring melodies back to the world."

...that we are very optimistic about our future?

The Best of Ella Fitzgerald

Just listened on YouTube to Yuja Wang playing Brahms' "Piano Concerto No.2" with Munich Philarmonic conducted by Valery Gergiev. Brahms is our favorite composer and we are usually quite jealous listening to others' interpretation of his music. However, Yuja deserves our admiration and praise.

If we say that jazz is swing and swing no longer exists, we would sound like purists.

When we say that Lisipi is a jazz trio we may sound to some like parvenu.

When we see that jazz festival scene is packed nowadays with pop stars and rappers we feel very liberal and open-minded.

And in general, we are happy that jazz always inspired and it always will with new generations of musicians and listeners.

We are in the process of getting ready for our European Tour.

As we care very much about promotion of Lisipi, we wouldn't waste a chance to make it heard by people even at our funeral...

It is usually preparation of repertoire for gigs we take sometimes on cruise ships or hotels worldwide.

Pierpaolo would be a writer, Silvio a lumberjack and Liliya would be an influencer.

Recently we read Reminiscence of Scriabin by Sabaneev. Try to find it. To us, it is one of the best books ever written about a musician. We would love to have dinner with Scriabin!

What would be your contribution to the world where everybody does what he/she loves and gets money for living out of that?

We would be living examples of that.