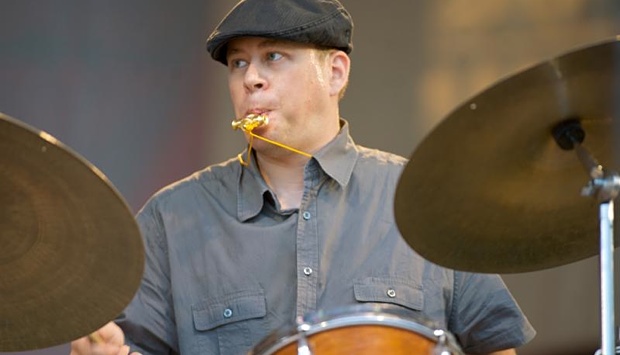 By TED SIROTA
April 17, 2013
Sign in to view read count
Meet Ted Sirota: Veteran Chicago drummer, Ted Sirota, has been playing the drums since 1980. Ted has lead his own band, Ted Sirota's Rebel Souls, since 1996. Rebel Souls have recorded five CD's for the Naim & Delmark labels. Ted has also played every Saturday night from 12:30-5:00am at Chicago's top jazz club, The Green Mill, for the past 18 years with Sabertooth. In January 2013, Ted embarked on his latest project—Ted Sirota's Heavyweight Dub. With his new band Ted hopes to pay tribute to the great studio bands and engineers in Jamaican music history, as well as continue to showcase his skills as a composer and player. Over the years Ted has also performed with such artists as Von Freeman, Ted Nash, Lalah Hathaway, Kurt Rosenwinkel, Jeff Parker, Rob Mazurek, Joshua Redman, Antonio Hart, Greg Osby, Ralph Alessi, Phil Upchurch, Pinetop Perkins, Eddie Kirkland, Johnny Adams, Fareed Haque, Mark Turner, Roy Hargrove and many others.

I knew I wanted to be a musician when... I heard Max Roach play in person for the first time at the Jazz Showcase in Chicago when I was 14 or 15 years old. I had never heard so much music coming from a drum set. Max was playing on a crappy rented drum set and made it sound like a million bucks. It was very inspiring.

Your sound and approach to music: I try to make my sound as bold, full, warm, and colorful as possible. I teach my students to try to sound as full as possible even at low dynamic levels, because that's what I strive for. My approach to music is basically "less is more." I don't really enjoy cluttered, over-bearing music. I like music that tells a story and communicates clearly with the listener, even if the music is abstract in nature.

Your teaching approach: My teaching philosophy is to try to relate whatever the student is learning at a given moment to real life scenarios. I try to help my students make the connection between their music and their lives. I try to help each student unlock their confidence and their creative potential, while also demanding technical proficiency and musical literacy.

Your dream band: Right now I am working on recording my "dream band"! I have the opportunity to make a Dub Reggae record with one of my biggest musical influences—Hopeton Overton Brown, AKA The Scientist. I've always been into Dub, but the genius of The Scientist has become more and more apparent to me over the years as I continue to listen to his mixes. They are just so brilliant. I wish more jazz musicians would check out his records. They could learn a lot from him.

Road story: Your best or worst experience: Because of a mix-up and the fact that I forgot the name of the band I was playing with that day, a bunch of people racing around on golf carts at a music festival thought I was the drummer for Willie Nelson. They were trying to get me backstage at the wrong stage and kept telling Willie Nelson that his drummer, Ted Sirota, was here and he kept telling them that he'd "never heard of Ted Sirota!" They finally came back to me and told me "Willie's never heard of you." To which I responded "Who the hell is Willie?" because I didn't even know Willie Nelson was there. I was just trying to find the stage I was supposed to be on. Once I finally did (I was 30 minutes late) thunder and lighting came crashing down and we were forced to stop immediately. I played for about a total of 30 seconds and the show was cancelled. It took me 2 1/2 hours to get to the gig in bumper to bumper traffic and record heat over 100 degrees.

Favorite venue: My favorite venue has to be the Green Mill in Chicago. I've been playing there every Saturday night for 18 years with Sabertooth. I've also worked with many other bands there over the years. I feel like I'm playing in my living room when I'm at the Mill, and the staff has always been like family.

Your favorite recording in your discography and why? I like them all about the same. Like others have said, it's like trying to decide who your favorite child is. If I had to choose one I would say the last one—Seize the Time. I really liked the rapport that the band had developed by the time we recorded that record.

The first Jazz album I bought was: Wow. After thinking long and hard, I think it was First Time! The Count Meets The Duke on Columbia Records.

What do you think is the most important thing you are contributing musically? I think the most important thing I'm contributing musically are my original compositions, and incorporating my different musical influences into my music but still making the concept sound like one entity and not scattered all over the place. Also, trying to relate my music to the struggle against oppression and not just making "art for art's sake."

Did you know... I'm kind of a geek when it comes to technology. I can fix your computer, but please don't ask me to do it. Next thing I know I'm fixing everybody's in your family.

How would you describe the state of jazz today? Pathetic.

What are some of the essential requirements to keep jazz alive and growing? Relate the art to the masses of people as well as advancing concepts and ideas. Jazz has no connection to the lives of everyday people any more and therefore is too influenced by academia and musical acrobats. Some of the greatest musicians and composers in Jazz history wouldn't get recognized today because the emphasis is too much on "technique" and blowing people away with your chops, than on making great art.

What is in the near future? Recording my new band—Ted Sirota's Heavyweight Dub with The Scientist in July—pending a successful Kickstarter campaign! Shows and touring to follow...

What's your greatest fear when you perform? That I'll die while playing the drums on stage I guess. That would be awkward.

What song would you like played at your funeral? "Just For You" by Ornette Coleman.

What is your favorite song to whistle or sing in the shower? 1-877-KARS FOR KIDS. Man, I hate that commercial but its always on the radio and I listen to sports radio in the shower.

By Day: I teach drum lessons in my home studio.

If I weren't a jazz musician, I would be a: A more financially sound person.