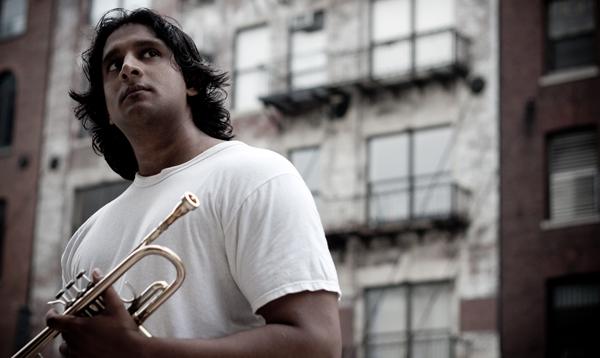 By AAJ STAFF
October 23, 2010
Sign in to view read count
Meet Suresh Singaratnam: Suresh Singaratnam is a trumpeter of uncommon breadth; unique, not only for the small crowd he inhabits as a virtuoso of both classical and jazz styles, but also for the continuity and clarity of his voice across both idioms.

Suresh studied with Canadian trumpet virtuoso Norman Engel throughout high school, where he exhibited an uncommon aptitude for the trumpet, winning the Scarborough Philharmonic Youth Concerto Competition at age 17.

After a year at the University of Toronto, Singaratnam transferred to Manhattan School of Music where he earned a B.Mus degree in jazz trumpet, and an M.Mus degree in classical trumpet.

Singaratnam's dual album release in 2009 was the product of several years of germination. Two Hundred Sixty-One, Vol. 1 is not an opening statement, but rather an adult work.

Lost in New York, Singaratnam's all-original jazz album, narrates several years of the artist's life during his time in New York. The program is eclectic, ranging from the intervalic and twelve-tonal, to singable originals evocative of Billy Strayhorn and Johnny Mercer.

I knew I wanted to be a musician when... I realized throughout every phase I went through as a kid, music was the one constant.

Your teaching approach: Learning music is learning how to use one's creativity to enjoy discipline—and then using that discipline to enjoy creating.

I was fortunate enough to record my first album with my "dream band."

Toronto Centre for the Performing Arts.

Your favorite recording in your discography and why? Don't really have much of a discography at the moment, but I think "Fortress of Song" is my favorite track from Lost in New York. The other guys in the band took nothing more than a melody and bass line I wrote, and turned it into an accidental masterpiece.

The first Jazz album I bought was: A cassette tape of Louis Armstrong's Greatest Hits. Best $5 I ever spent.

What do you think is the most important thing you are contributing musically? Ask me again in 20 years.

My answer to the "I knew I wanted to be a musician when..." question was straight out of a Star Trek TNG episode, because I had my realization about music while watching that episode.

How would you describe the state of jazz today? We had to kill jazz to save it and we're living with the consequences (good and bad) of those efforts today.

What are some of the essential requirements to keep jazz alive and growing? Learn the history, be aware of the present, don't fear the future.

What is in the near future? Another jazz album, a couple classical albums and something else.

I'm practicing as much as my lips will let me.

If I weren't a jazz musician, I would be a: I'm just a musician. If I wasn't one, I'd be a very depressed human being.