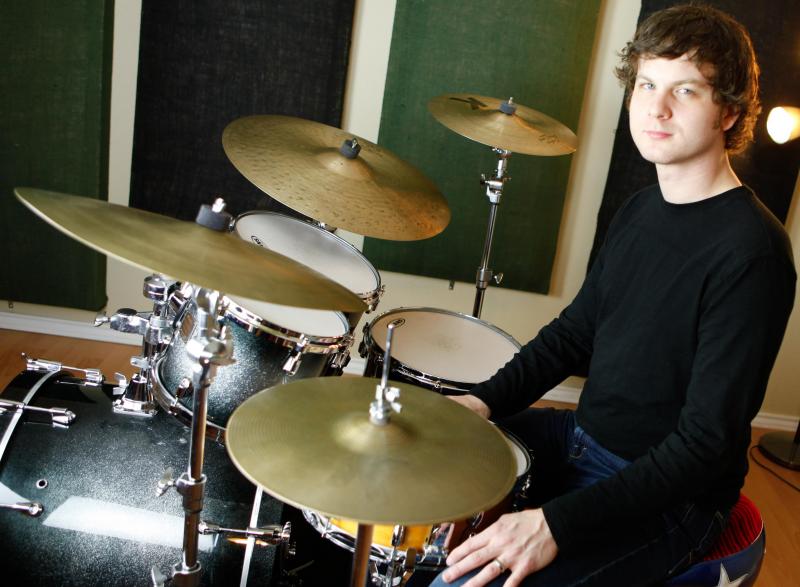 By STOCKTON HELBING
December 27, 2011
Sign in to view read count
Meet Stockton Helbing:
I starting playing drums in the sixth grade, while growing up in South Carolina. After high school, I attended the University of North Texas where I played in the well known One O'clock Lab band under the direction of Neil Slater. That opportunity helped open the door to being hired by jazz trumpet legend Maynard Ferguson. I spent four year touring the world with Ferguson, as well as serving as Musical Director.

I had the amazing opportunity to play on and produce Maynard's last studio album, The One and Only, which we recorded just four weeks before his sudden passing. After Maynard's passing I moved back to Dallas, TX, making it my home base for teaching, playing, and traveling. I just released my third album, Battlestations and Escape Plans, which is an all-original album for which I composed and arranged all the music as well as writing an original short story that accompanies the project in the booklet.

Teachers and/or influences?
While in college at North Texas, I was privileged to studying with some amazing Jazz educators and inspirations, including Neil Slater, Ed Soph, Dan Haerle and Jim Riggs. After school, my greatest teacher was Maynard Ferguson. Maynard taught us young guys by just letting us play, while all the while encouraging us. Maynard also lead by example, always playing his best and with the utmost enthusiasm.

I knew I wanted to be a musician when...
My Mom claims that I have been brainwashed into being a drummer. She says that when I was a baby, the only thing that would get me to stop crying was for her to read to me The Little Drummer Boy. So I guess I've known I'd be a drummer for a long time.

Your sound and approach to music:
My approach to music is best summarized in three words: Balance, consistency and excellence. Balance: I strive to have a healthy balance in my own drumming, with equal thought and time committed to the physical side of the instrument, i.e. technique and coordination, and the musical side of the instrument, i.e. melodicism and motivic development. Consistency: I seek to play on the highest level possible every time, always striving to make my best playing better and my weakest player stronger. And Excellence: I desire to approach everything I do, from the practice room to the stage to the interaction with students and fans with the highest commitment to excellence and doing whatever it takes to do a thoroughly good job.

Road story: Your best or worst experience:
One of the greatest touring experiences for my was the first time I played at Ronnie Scotts' jazz club in London. I grew up listening to a couple great albums that were recorded there, most notably Live at Ronnie's , by Buddy Rich. It was a surreal experience for me as, for the first time I walked into the club, already quite nervous. The first thing I saw was a framed picture of Buddy, with a look like "don't come in here and play anything that's not great kid!" That always stuck with me, every time I played there. Trying to play in a way that would make Buddy not want to punch me—or, at least, swear at me!

Your favorite recording in your discography and why?
I'm most proud of my new album Battlestations and Escape Plans. I believe it is the best example to-date of my playing, composing, arranging, and producing.

The first Jazz album I bought was:
The first jazz album I bought was, believe it or not, a Best of the Glenn Miller Orchestra tape. I was first introduced to jazz while in middle school playing in the jazz band. We played an arrangement of "In the Mood," and I liked it, so I wanted to hear more. I went on from there to Buddy Rich and Maynard Ferguson, which really started getting my excited about Jazz. From there it was on to Miles Davis and all his wonderful sidemen's projects. I've been obsessed with jazz ever since, as it continues to capture my imagination and interest.

How would you describe the state of jazz today?
I think that jazz today is still vibrant and growing. I believe that there are still jazz musicians who maintain a healthy understanding and respect for the history of music while pushing the boundaries of what jazz currently is. The problem is that with each passing year, jazz is less and less popular and accessible. jazz, if it's not careful, may end up being a thing of the past, only viewed in museums.

What are some of the essential requirements to keep jazz alive and growing?
Jazz musicians need to remember that we must entertain our audiences if we desire their patronage. We are not entitled to records sales or popularity. Those are things we earn by entertaining, uplifting, encouraging and energizing our audiences. Now, more then ever, us jazz musicians need to inspire non-jazz aficionados into taking an interest in the rich past, present, and future of jazz by musically inviting them into our world, rather than ignoring them or acting as if they are privileged to hear our music and watch us perform.

What is in the near future?
I'm very exciting of a lot of upcoming projects that are being released. First, I'm really excited and proud of my new album, Battlestations and Escape Plans. I have received great feedback from fans and critics so far and I'm really excited on where that will lead. I'm also proud to be on a few current/soon-to-be releases that I'm playing on including The Whirl, by tenor saxophonist giant Chip McNeill; The Colour of Space, by guitarist Anthony Plant; and two big band albums—one, by composer/arranger/bassist Kristian Bergheim. I also am already starting to work on post-production for a new album that I recorded last summer with some amazing musicians from across North America. It features ten of my original, more straight-ahead compositions. I'm excited to get that project ready for a summer 2012 release.

If I weren't a jazz musician, I would be a:
Definitely a professional video gamer...if that even exists.