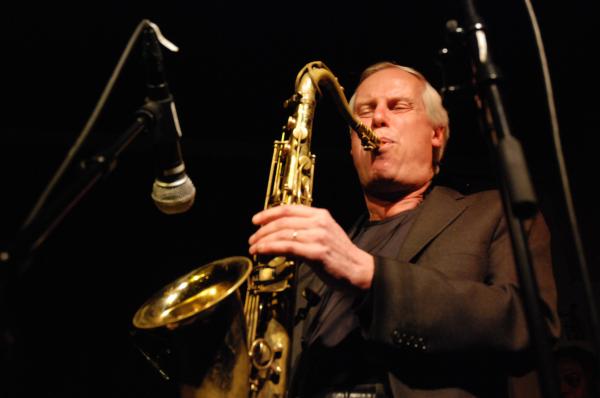 By SIMON SPANG-HANSSEN
May 13, 2013
Sign in to view read count
Meet Simon Spang-Hanssen:

Mostly self-taught. Strongly influenced by John Tchicai, with whom I started out and also by Dexter Gordon, who was often performing in Copenhagen in the seventies/eighties. I actually caught him a couple of times at the Café Montmartre. Other main influences : Sonny Rollins, John Coltrane, Wayne Shorter, Charlie Parker, Ornette Coleman, Eric Dolphy, Joe Henderson, as well as Paul Gonsalves, John Gilmore, Steve Lacy, Johnny Griffin and Booker Little.

At 14 I heard Duke Ellington's Money Jungle and was completely captivated (at that time I listened mostly to Jimi Hendrix, The Doors, Muddy Waters. Soon after, I bought my first jazz records, the sounds of Johnny Hodges and Charlie Parker soon convincing me that I should become a saxophonist. I got an alto (rented) for my 15th birthday.

It was always my idea to work on having a recognizable sound and develop my own ideas. On both soprano and tenor I like to explore the lower register. Generally my approach to music is quite intuitive.

Each student is different, I try to find the best way to give them a taste for both creativity and regular work on the craft.

In ensemble teaching (which I do most), the focus is very much on the internal and external communication, sense of the musical whole, responsibility, energy, consciousness of form, duration, contrast. I usually use my own material; often we work out the forms and details of the arrangements together.

I already have several ideal bands, some of them could play more often.

It would nice to play with Billy Hart again, it has been a while.

A couple of highlights:

A jam with Dexter Gordon at the La Fontaine, Copenhagen around 1982;

A festival-tour in France with Nenê's Band and Hermeto Pascoal e Grupo; the concerts usually ended in the street;

Rainbow Spirit at the Jahazi Festival, Zanzibar in 2012; lots of music, all-night jams in great surroundings.

A personal mix of things that I like, creating little surprises. In my compositions I would for instance use a straight-ahead 32-bar A-A-B-A form, but with not very bebop-ish scales and melodic turn; just an example.

These mixes are not done on purpose but pop up as the writing/playing goes along.

Having more or less started out with free jazz and later moved to modern jazz/bebop and experiences with Brazilian, Turkish, West African music etc., the possibilities of crossings are numerous. At the same time I try to keep the writing coherent and clear.

I am also a painter, mainly oil and gouache, and have had quite a few exhibitions during the last 12 years. Some main-influences: Klee, Miró, Picasso, COBRA, African and Oceanic art.

Tour in Denmark with my Brazilian Project.