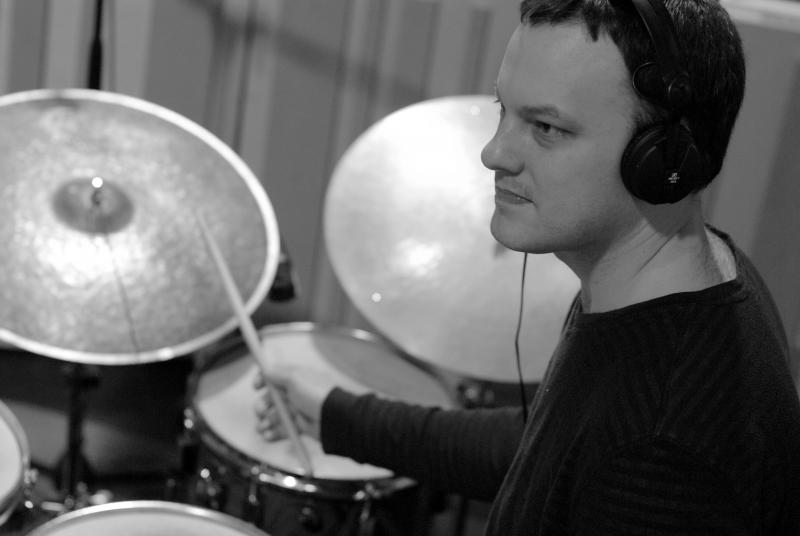 view slideshow
By SCOTT MCLEMORE
September 18, 2012
Sign in to view read count
Meet Scott McLemore:
Born in Norfolk, Virginia in 1973, Scott McLemore spent over a decade in New York where he was equally at home playing in the trios of saxophonist Tony Malaby, guitarist Ben Monder, pianist Michael Kanan and George Colligan. Although he is best known for his work with Icelandic pianist Sunna Gunnlaugs (who is also his wife), Scott's own efforts as a leader have resulted in two recordings: Found Music (Fresh Sound New Talent, 2006) and the newly released Remote Location (Sunny Sky, 2021). Now living in Iceland, he continues to perform all over the world and collaborates with musicians in other countries.

Teachers and/or influences?
My first real teacher was Howard Curtis, who helped me prepare for entrance exams when I decided to go to school for music. He was also a major influence as he was able to hear him live more than any other drummer. John Riley was my teacher at William Paterson College. I'm still trying to sort out all the information I got from him.

I knew I wanted to be a musician when...
I don't think there was a moment when I realized I wanted to be a musician. I just sort of did it, and I think one night when I was driving home after a crazy, packed show with Ant Man Bee, where people were stage-diving and freaking out... I can remember stopping at a 7-11 and thinking that was really amazing.

Your sound and approach to music:
I'm always just trying to do whatever I can to make it sound good, and have fun. Concerning the sound of the drums, there's a certain sound that I like but it's hard to put my finger on it. It changes too. Sometimes I'll hear another drummer and think, "Maybe I should try to get more of a bass drum sound like that," but generally I'm just happy with what I've got. I don't like using new sticks, or new skins. I'll put off changing them longer than most drummers. I avoid brightness.

Your teaching approach:
I try to get the students to realize that music isn't something separate from them, that music doesn't come from a book or even a radio, that music comes from people just like them. I try to get them to find the music inside them, and become their own teachers.

Your dream band:
I would love to work with all kinds of musicians. Pianist Bobo Stenson and bassist Anders Jormin are pretty high on that list. Guitarist Bill Frisell is probably at the top of the list. Saxophonist Wayne Shorter is up there, too. Trumpeter Tomasz Stanko, saxophonist Joe Lovano, bassist Mark Dresser, trumpeter Arve Henriksen, guitarists Lage Lund and Jakob Bro are all guys that I would be honored to play with, but that list is infinite.

Road story: Your best or worst experience:
The time we drove to Detroit during the big blackout was hands down the worst. Sunna's trio was supposed to play two nights at a club there and do a radio interview during the day. The DJ at the station convinced us not to come into the city, and we couldn't get in touch with the club owner. Eventually we decided to head back to New York. We got a flat tire in Pennsylvania and as we're trying to change the tire the club owner calls and asks if we're coming.

Favorite venue:
I've never played there, but the Village Vanguard is my idea of the standard to which every jazz club should aspire. Of all the places I've played, Jimmy Glass in Valencia, Spain is my favorite. It's just unlike anything else.

Your favorite recording in your discography and why?
My favorite right now is my new album, Remote Location. I've only made two as a leader, and this is the first time I've experienced actually wanting to listen to my own album. Everyone just plays so well on it, and the compositions have a lot of meaning to me.

The first Jazz album I bought was:
I'm not sure. It was either Thelonious Monk's Monk's Dream, Miles Davis' Kind of Blue or Ornette Coleman's Change of the Century.

What do you think is the most important thing you are contributing musically?
Energy. For me it's all about being sensitive to the energy of the band.

Did you know...
I'm crazy about coffee, although I can only have two cups a day because of migraines. I brought my own espresso machine to the recording session for Remote Location and set my personal record for cappuccinos made in one day. Fourteen!

How would you describe the state of jazz today?
There are creative people out there doing incredible things. There are also organizations in some countries that have risen up out of a need for a support system. Things are slowly getting better. Things like Jazz Forum in Norway should be a model for the rest of the world.

What are some of the essential requirements to keep jazz alive and growing?
Jazz musicians need to be aware of the need to connect with their audience. Everyone does it in their own way, but ignoring the audience is not good. It might have worked for Miles, but he was the exception.

Musically I don't think we have anything to worry about.

What is in the near future?
I'm about to start a collective project with the French bassist Nicolas Moreaux and Icelandic pianist Agnar Mar Magnusson. Sunna's trio is also about to record another album, and I'm booking my own quintet anywhere that will have me.

What's your greatest fear when you perform?
I don't really experience fear when I perform, thank goodness.

What song would you like played at your funeral?
The Beatles' "Yellow Submarine."

What is your favorite song to whistle or sing in the shower?
I usually compose in the shower, so it would be one of my own.

If I weren't a jazz musician, I would be a:
I would do something creative. I just love making things. Whether that's writing a tune, designing a CD jacket, writing a story, or cooking something I've never tried before, it all carries the same feeling of satisfaction.