By RORY HOFFMAN
January 1, 2012
Sign in to view read count 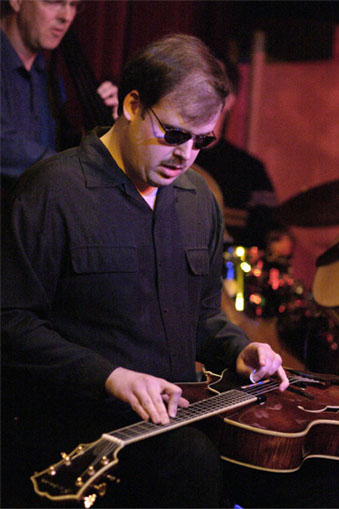 Meet Rory Hoffman:
I was raised in a musical family, playing drums in the country gospel family band by the time I was five. Twice named musician of the year, 2004—2005, by the ICMA, based in Nashville, TN. Moved to Nashville in the spring of 2008. I currently work as a freelance touring and session musician.

I knew I wanted to be a musician when...
I was born almost. I'm told I could hum melodies pretty well in tune when I was six months old. I discovered I had perfect pitch at around age three or four. So I pretty much always knew I'd be a musician. Not really sure when or if I made the conscious decision that I would try to go pro. It just seemed like that was what I was meant to do.

Your sound and approach to music:
Born and raised in South Dakota, my sound melds polka music, gospel, country, all sort of infused into what I do as a jazz musician. Also, being a multi-instrumentalist, I think sometimes what I do on one instrument cross-pollinates to another instrument.

I've had a couple people tell me for instance that my comping on guitar sometimes reminds them of what a pianist would do. Another guy told me once that when I'm soloing on guitar he sometimes heard saxophone phrasing. My approach to music is to make good music, not necessarily to find "my style" and just stick with that. It makes it harder to develop my brand, but I'm OK with that.

Your dream band:
Many of my favorite musicians are dead, sadly. I'd have loved for instance to have met and played with Art Tatum, Stan Getz, Django Reinhardt. I have to say though, working in Nashville, I get the chance to work with some amazingly talented musicians. Playing western swing with Doug Jurnigan and Buddy Spicher, for example, is about as good as it gets. Current singers...I'd love to play a set with Emily-Clair Barlow or Sophie Millman.

Favorite venue:
Though not a jazz venue, I'd have to say playing on the stage of the Ryman Auditorium in Nashville was one of my major highlights, just because it's the Ryman. The couple times I played Spazio's jazz club in California, with John Pisano, were pretty special too.

Your favorite recording in your discography and why?
I'd have to say my newest record, Swing Expedition. Why? Because it's the first record I made purely because I wanted to make it, with no other agenda or goal than that. I'm proud of my gospel and country albums too, but this swing record goes to a different place entirely. For instance, I did a bossa nova complete reharmonization of an old three-chord country song. I did an all-harmonica treatment of a Cole Porter classic. A couple Star Wars themes made an appearance in a gypsy jazz setting. "Polka Dots and Moonbeams" was subjected to tenor banjo and accordion. So I didn't just pick a style of jazz and make a record. I took a chance and went several directions at once, which is why I called it an "expedition." It's a journey through lots of different terrain.

The first Jazz album I bought was:
Harry Connick, Jr., We Are In Love.

What do you think is the most important thing you are contributing musically?
Because I have fans in the gospel and country music world, I'm glad to introduce them to jazz music. But I'm doing it in a way most people can understand. Some of the tracks on Swing Expedition are just straight up jazz, but some are not. Conversely, maybe I'll make some hard-line jazz fans appreciate that a country picker can do more than twang a Telecaster. Finally, if I might be so bold as to say so...I don't think there are too many people out there who could make the kind of record I made. Sure, a collection of people could make a record similar, but I basically did this record myself. Played the instruments, created the arrangements, and engineered the recordings. I did have friends play upright bass and drums on four of the tracks with me, which was great fun. Other than that, for better or worse, this is my record.

How would you describe the state of jazz today?
I wish it was popular again like it was in the '40s. I'm only 33 years old, so it's not like I'm just longing for my good old days. Great records are still being made, an audience still exists. And for that I'm thankful.

What is in the near future?
My sister, Konnie Ellis, just wrote a book called Rory's Story. It tells about growing up one of four blind siblings, touring and recording with the family band, and lots of other stuff which led up to me deciding to try to be a professional musician. Along with the book, I've just finished compiling a companion CD that will feature a lot of these old studio recordings. I also perform (when I'm in town) with three swing bands around Nashville...the Carolyn Martin Swing band, Paul Kramer and Swing Street, and Nashville's premier gypsy jazz group, the Gypsy Hombres.

If I weren't a jazz musician, I would be a:
jazzier musician.