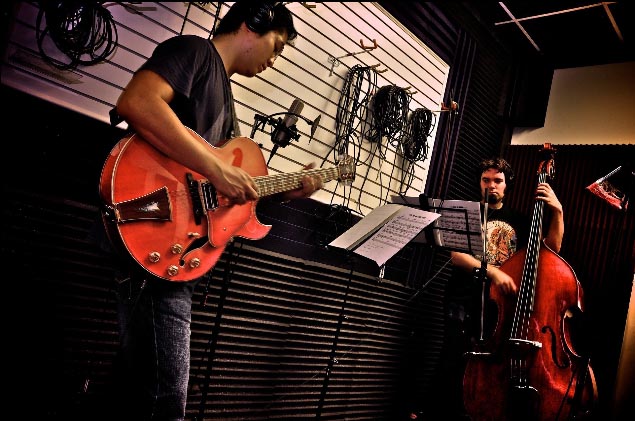 view slideshow
By ROGER CHONG
July 14, 2011
Sign in to view read count
Meet Roger Chong:
Classic jazz guitar-playing with a youthful edge—that;s what jazz guitarist Roger Chong does. A graduate of music from York University in Toronto, Canada, Roger has a solid musical know-how courtesy of his mentors—jazz musicians and educators Roy Patterson, Matt Brubeck, Casey Soko, and Mike Cado. While there, he honed his guitar skills as part of the university jazz orchestra led by its founder, renowned jazz bassist Al Henderson of Time Warp.

With Roger;s debut album In the Beginning, he puts a premium on his other music talents: singing and songwriting. These fused with his superb jazz guitar playing is exceptionally featured in his latest CD, Love Me One More Time. The title track of this album has been selected to be part of the soundtrack to a JYC film titled Promise, presented by e-Evolution.

These days, Roger's time is split between leading his own jazz combo and serving as jazz guitarist for orchestras under the Sheraton Cadwell Group. He has also entered the world of teaching where Grade 6 to 8 students with the Toronto Catholic District School Board are being mentored in Instrumental Music. Roger's also generous enough to even give private lessons in Markham, Ontario.

Be riveted with Roger Chong's jazz guitar playing by getting his latest album at iTunes, distributed by JMD Records/INgrooves (a partner of Universal Music Group.)

Your sound and approach to music:
I am quite picky when I compose or choose my repertoire. The tune has to be something I could feel or has an element that moves me.

I also value my tone a great deal. Perhaps my friend and fellow jazz musician, Paul Neufeld, says it best when he described my sound: "Roger's new album is full of warm and well-written tunes. He has a great ear for the classic jazz guitar sounds—Wes Montgomery, Grant Green, Herb Ellis and Tal Farlow all spring to mind—and his phrasing and time feel are solid and hard-swinging! Roger's music has an agreeable style rooted in bebop and soul-jazz..."

Your dream band:
I love the musicians that I am currently working with now. Ken McDonald (bass) and Steve Farrugia (drums) are both very solid and tasteful musicians. Having said that, if I could have any musician in my band I'll probably pick Steve Gadd on drums, and Joey DeFrancesco on the B3 to form a trio. I am also a big fan of Joe Sample.

Your favorite recording in your discography and why?
My favorite recording is probably my latest release Love Me One More Time, mainly because of the musicians I worked with. As I mentioned before, Ken (McDonald) and Steve (Farrugia) were amazing as a rhythm section. On top of that I also had Denis Kugappi playing the piano. Their contributions were creatively very inspiring for me and had probably prompted me to play in a way I wouldn't have otherwise.

The first Jazz album I bought was:
Although it's more of a blues album, the one that started it all for me was Eric Clapton and B.B. King's Riding With The King" I remember there were many times when I was listening to it that I just find myself getting lost in the conversations between Clapton and King's solos.

What do you think is the most important thing you are contributing musically?
Although it sounds very cliché, I try to play from the heart. I play music that makes me feel good. Then the rest just take cares of itself. I don't have to worry about playing something that's already been done or repeating myself. I don't have to worry about being commercial. As long as I can feel it, I'm sure the listeners will too, and that's my contribution.

CDs you are listening to now:
Emilie-Claire Barlow, The Beat Goes On (Empress Music Group Inc.);

Desert Island picks:
This would be torture. Don't make me pick. By the time I'm able to pick five I would have been saved already.

What is in the near future?
I am currently promoting my latest release. But I'm already itching to go into the studio again, hopefully either by the end of 2011 or in 2012.

By Day:
I moonlight as a band teacher with the Toronto Catholic District School Board, teaching middle school students instrumental music.