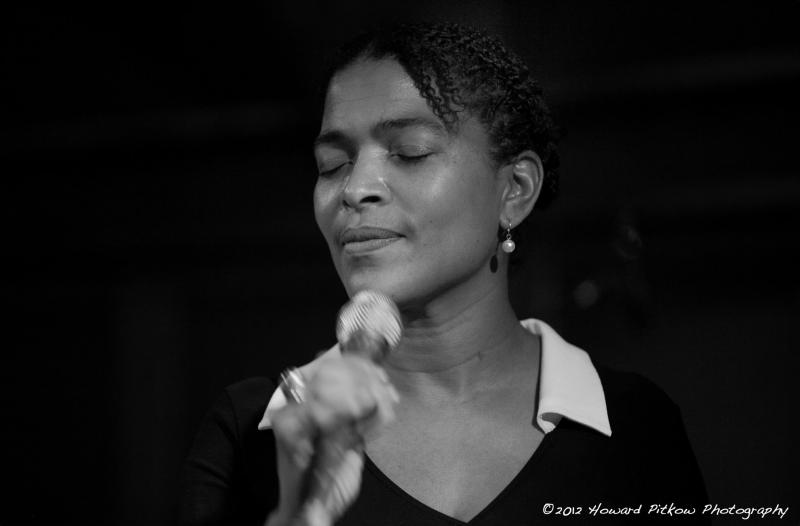 By RHENDA FEARRINGTON
August 21, 2014
Sign in to view read count

Meet Rhenda Fearrington:
Rhenda Fearrington is considered New York Soul in the Heart of Philly Jazz, which produces a warm and soulful presentation when singing from the Great American Songbook. When she's performing her original music, her authentic delivery is so engaging that even the largest venue becomes as intimate as her living room and each member of the audience feels she's speaking just to them!

An opportunity came to tour with Award-Winning Composer/Producer & Percussionist, James Heath, Jr. aka MTUME. She toured as a back-up singer of the North West Corridor of the US, to promote their album, "In Search of the Rainbow Seekers," while doubling as an opening act for Lionel Ritchie and the Commodores.

Through her affiliation with drummer, Howard King, Rhenda got to audition as a back-up singer for Multi-Grammy Award Winning Pop Vocalist, Roberta Flack. Her years with Roberta took her all over the Unites States and all of the world.

Rhenda came to Philadelphia to raise her family. She became involved with the Philadelphia jazz scene and has been busy performing throughout the city after releasing her first CD in 2012, This Moment's Sweetness.

Teachers and/or influences?
Her most thorough teachers were her Sister, Marilyn Sanford (1952-1994) and Roberta Flack. Her Grandmother is responsible for her feeling comfortable in front of an audience, because she had to perform for guests in her home as a child.

I knew I wanted to be a musician when...
When I heard Ella Fitzgerald singing "Mr. Paganini" on my mother's Magnavox Stereo. I didn't know what scatting was, but I would mimic her singing that song.

Your sound and approach to music:
I hear something different every time I re-visit a song I've performed before. I can't sing any song the same way twice. I like to try different phrasing without losing the "story" or the melody.

Your teaching approach:
Sing from your heart (and your diaphragm)! Tell me a story so I'll believe it!

Your dream band:
I have a recurring dream of working with some legendary Philadelphia artists (horn players) for a big band.

Road story: Your best or worst experience:
While touring with MTUME, we taped a show for Soul Train, with Don Cornelius! As he was introducing the large ensemble, which also included George Clinton's Horn Players, Don did a double-take and began flirting with me on National Television.

Favorite venue:
Philadelphia's Art Museum. While a challenging room to play with its high, vaulted ceilings, the staff treats me exceptionally well.

CDs you are listening to now:
I am extremely loyal to the locals, so:

Harry "Butch" Reed's 1st Time. A drummer who has a lot to say.

Duane Eubanks's Second Take/ A elegant Philadelphia trumpeter, whose family roots run deep within the jazz culture in this town.

Venissa Santi's Big Stuff-Afro Cuban Holiday, is dynamite. There's something about that arranger/percussionist, Francois Zayas that adds a freshness to all of his projects, and this is no different. Venissa does a tribute to Billie Holiday and there's nothing common about Francois' arrangements. Her haunting delivery of "You Better Go Now," was on repeat in my car for several months.

Your favorite recording in your discography and why?
A collaboration with DTown's guitarist, Larry Tamanini who wrote the music and I, the lyrics. It's called "The Voice," in honor of his father, Lawrence Tamanini, Sr.

The first Jazz album I bought was:
Al Jarreau's This Time.

Did you know...
I got to sing for Imelda Marcos, during a private party held at the Philippine Palace, in Manila.

What's your greatest fear when you perform?
Having my voice crack during a song, after I've been exposed to cats or old dogs, as I am allergic.

What song would you like played at your funeral?
Pat Metheny's "Last Train Home."

What is in the near future?
Before the summer of 2014 has ended, I will have recorded a new CD. I have many dates lined up from Summer to Fall.