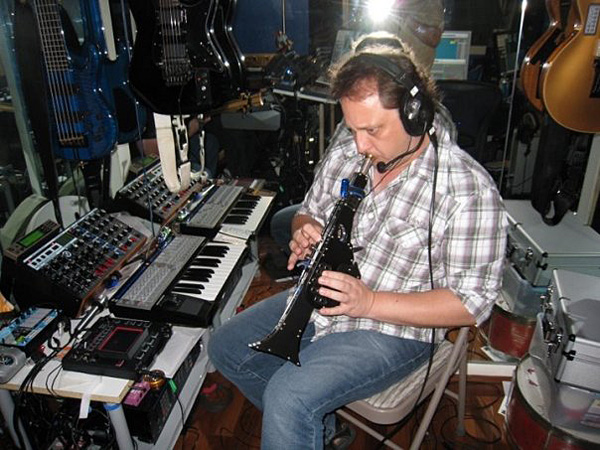 By AAJ STAFF
September 21, 2010
Sign in to view read count
Meet Peter Dragotta: Peter Dragotta is a trumpeter, wind synthesist, composer and producer who performs under the name pharmacopia. For over 20 years he has connected his jazz origins with ambient, house, electronica and break beats, as well as elements from hip hop, rock, pop, and classical music melding them into soundscapes of deep intensity.

Peter's interest in both acoustic and electric music demonstrates his comfort in melding pop, rock and funk, alongside modern jazz. These distinctive sensibilities establish him as a much sought out musician. Peter never studied music formally but was very close to his friends who did study music at William Paterson University where he attended and at Rutgers University where his brother Chris attended. To this day, both schools are known for their excellent music programs.

I knew I wanted to be a musician when... When I thought by playing the trumpet meant you would be able to get the Whip Cream and Other Delights girl.

Your sound and approach to music: Playing mostly the wind synth, my sound is all over the place. It's either synthesized or modeled from real instruments. It's played with an array of varying effects and processing, or nothing at all. It can be hot, cold, mild or sweet. My sound doesn't define me.

Road story: Your best or worst experience: Setting up for a gig in South Jersey and my drummer comes in (on time for once) and is looking a bit dazed.

After our greetings, I asked him if he needed help bringing in his drums. That's when his jaw dropped and became stunned. Yes, he forgot his drums, so he drove an hour home to get them. He came back and was setting up as we were playing. Then, we discovered, he forgot his cymbals and sticks. All in all, he made it work.

The first Jazz album I bought was: Woody Shaw's Woody III. I still have the LP and have Woody's obituary from the New York Times in the sleeve. That record is very, very special to me; there are barely any grooves left on it! I may frame it someday.

I worked for three years at a Z-100 a Top 40 radio station in NYC in the '80s. I've been fortunate (maybe unfortunate) to have performed with Harry Belafonte, The Beach Boys, Debbie Gibson, Kenny Loggins, and The Miami Sound Machine.

How would you describe the state of jazz today? From the general public's point of view jazz is too conservative, boring, and has an air of stuffiness. The most creative jazz and players I hear in my area come from the few dives left in the Lower East Side and in Brooklyn. The music these people are creating can appeal to a wider audience. But that will never happen because music industry marketers are not taking any risks these days. These jazz musicians have to become better and more imaginative at marketing themselves.

What are some of the essential requirements to keep jazz alive and growing? Live local jazz in cities like New York has become a nightmare on so many levels. Not enough venues to play, the venues that do book only want straight ahead music, too many musicians, and not enough local community support. I think musicians have to become more creative where they can play. I think jazz musicians have to become better marketers and planners. They have to organize themselves, create packages to sell (trios, quartets, etc. styles of jazz, etc...) Learn how to build an audience base.

My friends' band, Wake Up, recently played a gig in a boxing gym. They are playing in a bowling ally tonight. Outside-of-the-box thinking is where it is at if you want to make a living making music.

As for online bedroom produced jazz as I call it, there is a lot of good music and musicians out there. The compensation model on the sites that host your music are not very good for daily plays, but it is exposure and if you are also a performing musician it could help in building an audience that follows you around.

Another way you can make money with online music is if you align yourself with a site/company that also licenses your music. Again, you are in a giant pool, but if your music is picked by a film producer or ad agency you can make some nice change. I've been lucky a few times but in no way am I making my living with just my music.

What is in the near future? I just released an unplanned album called Mobile Music Diversions, under the pharmacopia name. It started off as a test project of my rebuilt home studio in my new apartment. It's a set of solo improvisations, using music apps on two iPhones and an iPad, along with my EWI.

My next planned album (hopefully by the end of this year) is the latest incarnation on my improvising program built on the ArtWonk platform. I've been performing again with various improv-based groups since I moved to New York City, in 2008. I've been studying the dynamics of how musicians listen and respond to each other. I've developed new algorithms that do a great job of interplaying with each other and responding to my instrument. My plan in the coming months is to record with additional acoustic and electro-acoustic musicians. Right now, I'm working out the bugs of audio-to-midi converters.