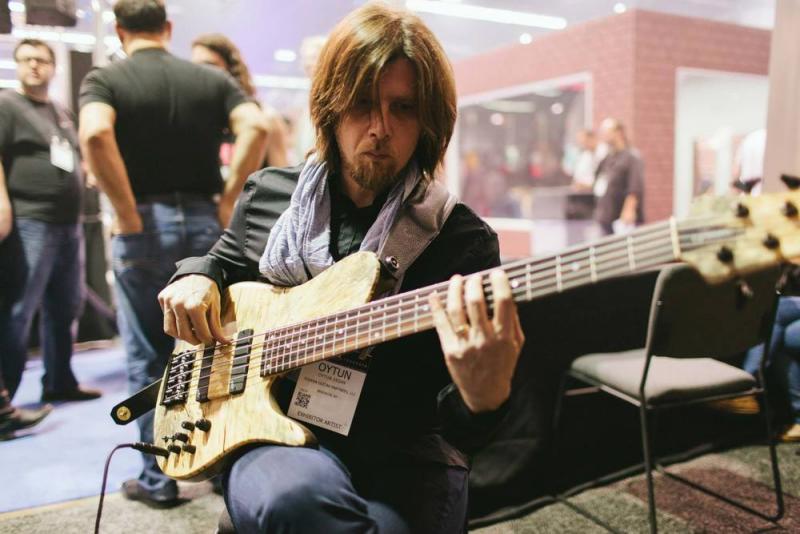 Oytun Ersan is a Cypriot electric bass and upright bassist, composer, instructor and conductor. At the early age of 15, Oytun joined the International Nicosia Municipality Orchestra as a bassist where he is still working for the past 20 years. During his career as a musician, Oytun has contributed to a great number of album projects, and performed at various international festivals and venues. He has worked with a number of world famous musicians including Prof. Rex Richardson, Wycliffe Gordon, Thomas Wolff, Savvas Savva, Tony Jones, Ola Onabule, Lloyd Chisholm, Paul Roos and Andrey Alpatov. In May 2015, Oytun Ersan released his first jazz fusion album East Meets West which features some special guests like Wycliffe Gordon on trombone and Prof. Rex Richardson on trumpet and Flugelhorn. Oytun is an official artist endorser for Fodera Guitars, MarkBass and GruvGear.

I have received one-one-one training with bass teacher Joe Hubbard and I am influenced by Victor Wooten, Jaco Pastorius and Tom Kennedy.

I first saw my father on stage with his bass.

Jazz fusion is my main music style and to be more specific, I am into funk and ethnic jazz. In my compositions, I present a combination of East and West ethnic melodies. Most importantly, I always try to be "me" while playing. And especially, while improvising, I focus on my inner world and try to reflect what's inside.

I always tell my students that it's good to listen to others and transcribe, as it really helps them develop their understanding of jazz. However, at some point, over-doing this may prevent them from developing their own style and character. I simply don't like to see my students copying others while performing when they actually are able to create their own lines. Therefore I try to teach them to believe in themselves and to reflect their very own inner worlds while playing. Imitating others is not an art and has never been one. The key is to be 'unique.'

I believe I am already building my dream band, however there are some artists in particular that I would love to work with like Steve Lukather, Stevie Wonder, Greg Howe and Simon Phillips.

I love animals and I even organized a fundraising concert for street animals not long ago but I have a phobia of praying mantises! I was on stage with a symphony orchestra as part of an international festival and there were 70+ musicians with me on stage. While playing, I saw this huge praying mantis approaching me. In a matter of seconds, I unplugged my bass (without muting the channel) and jumped down the stage and ran as fast as I could, while still holding my bass! I was very embarrassed.

I do not have a favourite venue. I love being on stage and the rest is not a big deal.

The song "My Mel" from my debut album East Meets West, because I composed it for my beautiful wife and it's the first song I have ever composed. It means a lot to me..

That I was born and raised in the only capital city on earth that unfortunately, remains divided.

Of a very high standard. There are many exceptional jazz players all around the world today however the number of listeners is a different story...

To introduce jazz to younger generations and show them the beauty of improvised music.

I am currently planning a tour in Europe to celebrate the release of my debut album. I have also started working on my second album, which I hope will be released in mid-2016.

To see a praying mantis approaching me!