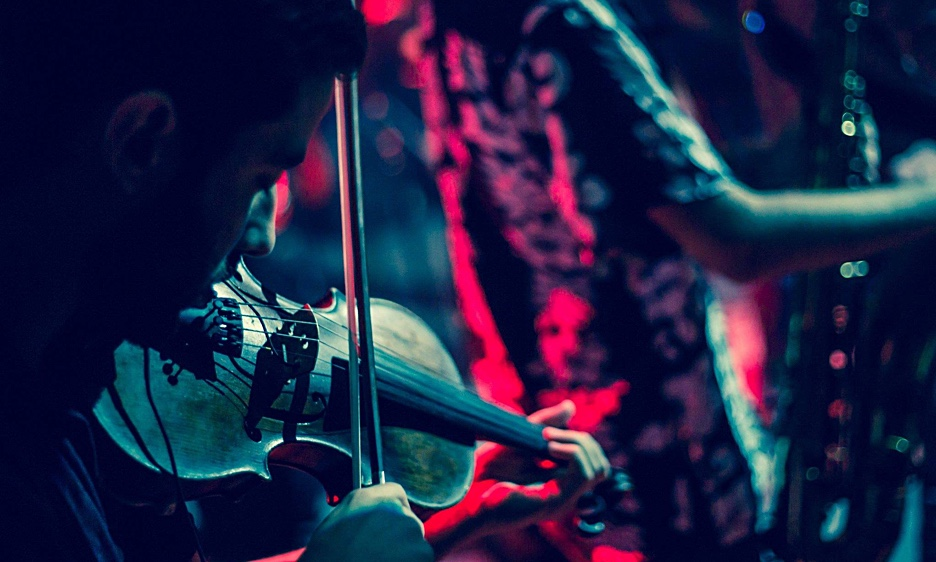 By OMER ASHANO
June 10, 2019
Sign in to view read count
About Omer Ashano

Israeli jazz violinist Omer Ashano started playing violin when he was six years old, later taking up the guitar at age 13. At the time, his guitar teachers were the influencers who exposed Omer to the styles of Blues, Rock n' Roll and Jazz as well as the ideas and possibilities surrounding improvisation. It was from this exposure that Omer started experimenting with this new knowledge and adapting it for the violin and late forging his career as a jazz and cross-genre violinist.

In 2016 Ashano moved to New York City and quickly immersed himself in the local jazz community and is now a renowned violinist as well as an acclaimed composer and musical producer. While continuing to record and perform internationally with the Israeli folk/rock band OSOG. 2019 marked a fruitful year in Ashano's career as he released his debut EP Alive In New York featuring original compositions and arrangements, to much positive reviews and acclaim. This year he also served as composer and musical editor for the silent film Hannah Can You Hear Me, which won the AFI World Peace Initiative Cannes Award for Best Arts Film.

I'm mainly a violinist although studying different instruments throughout the years including guitar, tabla and sitar, had a big part in shaping my technical and musical approach to playing violin.

I've had countless mentors over the years but with no doubt those people that I feel I owe the most is my classical violin teacher back in Israel Delia Jacob who gave her soul in teaching despite my ambitions to pursue jazz violin and in New York that was pianist Sam Yahel who has so much valuable insight to share with his students regardless of their instrument.

I also must credit one of my first guitar teachers, Shaul. He was the one to introduce me to the magic of Jimi Hendrix, who I consider my greatest influence until this very day, as well as exposing me to the first jazz records I used to listen to by Charlie Parker and Wes Montgomery.

When I uninstalled and got rid of all my video-games in order to not be distracted from practicing. I guess that was around age 16. As I started delving deeper into improvisation and playing violin around that age, I realized I could no longer view music as a hobby but as a life-time pursuit that I wanted to be immersed in day and night.

Many people like to call me a cynic. I know that this is probably due to my reserved or toned down temperament in addition to my strong inclination towards realism, naturalism and at times anti-spiritualism.

Nonetheless, I don't think of myself as cynic for I also keep a sense of optimism, appreciation to simple things and authenticity and above all love of human connection. I do think though that all of the above are somewhat expressed in my playing and composition. Simple and clean sound, reserved and not overtly emotional yet still expressive and relatable.

The same elements are also preserved in many of my compositions. Trying to keep a sense of folk music in them, not necessarily by the musical structure rather by the essence of the composition and the way I play it.

As a young violinist in Israel that experienced a crisis with Classical music and the Classical school, I've been looking around for non-classical violin teachers in vain. I've figured out that in order to play the music I want on the violin I'm going to have to teach it to myself, thus becoming an independent learner which is most likely the greatest gift I've ever received as a musician and a teacher.

I had to read books, watch videos, ask people how they practice, use my ears because I had no scores to any of the music I wanted to play, explore. I had to criticize myself, I had to remain conscious about my playing and what I think is missing in my playing in comparison to other players, analyze what is it that excites me in one's music or playing. Most of all, I had the privilege to remain attentive to any new idea being suggested to me, because no one ever taught me what the "truth" was.

Be your own teacher. That is perhaps the only "truth" I would force upon my students. As part of my teaching philosophy, I'm seeking to not only teach my students the skills they wish to acquire but to show them how to determine and teach themselves new skills they 'need' or desire to acquire.

My dream band would consist of musicians who are true improvisors and sharp listeners but yet aren't strictly improvising in the "jazz language." I'm in love with improvisation, of any kind and genre, it excited me since I can remember. I assume this explains my deep interest in folklore music of different cultures. Almost all of those musical traditions present an approach to improvisation of some sort.

A decent line-up for the band of my dreams would consist of Lionel Loueke on guitar, Josh Dion (NYC based rock drummer) on drums, Alick Macheso (Zimbabwean bassist and pop artist) and Kaushiki Chakraborty (Indian classical vocalist) singing.

A night of horror at the Austin Motor Inn: So me and my buddies from Israeli band OSOG went down to Austin, TX to perform a few official showcases at SXSW 2019. One of the nights, a couple of the band members, myself included, had to spend two nights at this extremely sketchy highway motel which on first glance seemed like a fun All American-anthropological experience for a bunch of Israeli tourists.

Only a few hours later we realized how 'true' our first road motel experience... After coming back from downtown Austin, we arrived at our motel room around 2am. About 15 minutes later we heard a strong knock on the door. After thinking it for a second, one of the guys headed over to the door, looked through the door pupil and then opened it. Two middle aged men were standing at the door with intimidating faces. One of the guys pushed the door to open it widely, scanned us and the room, said "you're good" then shut the door. A few seconds later we heard a few gunshots right outside our door! We all ran to hide in the other corner of our room. As time passed we would head over to the door and peak through the window curtains and the door pupil. A few minutes later we see two cops standing right outside our door aiming guns at our room! Long story short, we called the reception of the motel, talked to the officer, they let us out of the room, searched us, realized we were not the shooters because apparently there was a gun shell right on our door mat so the cops were about to break in our room. Needless to say we checked out of the motel an hour later.

That would be Chet Baker Sings. To me Baker's singing and playing sound the same. His style touches my heart and is an example of unique instrument- ear connection to which I aspire to and practice to reach such a level. I've been listening to this album for years and it has accompanied me through my best and worst memories and romance. Listening to it makes me feel in love even if I don't have an "object of my affection."

I think the most important thing I contribute musically is the fact that I try to play like Omer and not like somebody else.

I'd say my greatest influencers in jazz violin are Didier Lockwood and Stephane Grappelli, however, I'm not heavily influenced by other jazz violinists in my musical approach and I'm actually quite judgmental of them.

If artists start approaching jazz music in the same straight-forwardness and humbleness people approach pop music I believe the jazz scene will become much more unified, open minded and focused on the aesthetics of music rather than the aesthetics of different narratives people come up with for their music. I believe this will also make the music more accessible to larger audiences.

A few shows to promote my freshly released EP! Also excited to tour again with my band OSOG this summer, performing the Memphis Levitt Shell as well as the Philadelphia Folk Festival!

Fear itself. I fear feeling nervous on stage. When I'm nervous I cannot connect with my ears as much and then I feel that what I play has less personal and musical significance. I know that anxiety dims down your connection to yourself at the moment thus I feel that I cannot give all of myself over to the audience.

A chef! Jazz and cooking are so closely related. You know what I mean?

Johann Sebastian Bach. I would inquire about how he practices, what he thinks about while improvising and ask him to teach me his sickest II-V lick!

What do you want to tell jazz musicians of unconventional instruments such as the violin?

Always strive to play like yourself and not like someone else. Imitation and emulation of other musicians and instruments are a key tool in the process of learning improvisation. However, at some point a musician needs to set his own path, imagine a sound you aspire to and start seeking it. Too many non-traditional instrumentalists and jazz violinists in particular, are focused on trying to play like someone else. One is trying to play like Bird, the other like Grappelli and the third like Coltrane. That's great but those instrumentalists also have to understand the merits and limitations of their instrument. A jazz harp player may be able to transcribe and play a Freddie Hubbard solo note for note but yet it will never have the same intensity and projection of a trumpet and so playing the same notes is not enough to have the same musical impact compared to when a trumpet player plays it. Jazz musicians of non conventional instruments should realize that and seek a sound within a genre that compliments the style but also compliments the qualities of their instrument. Most importantly, you want to be true to yourself and have an authentic and unique sound, then why keep trying to play like someone else?