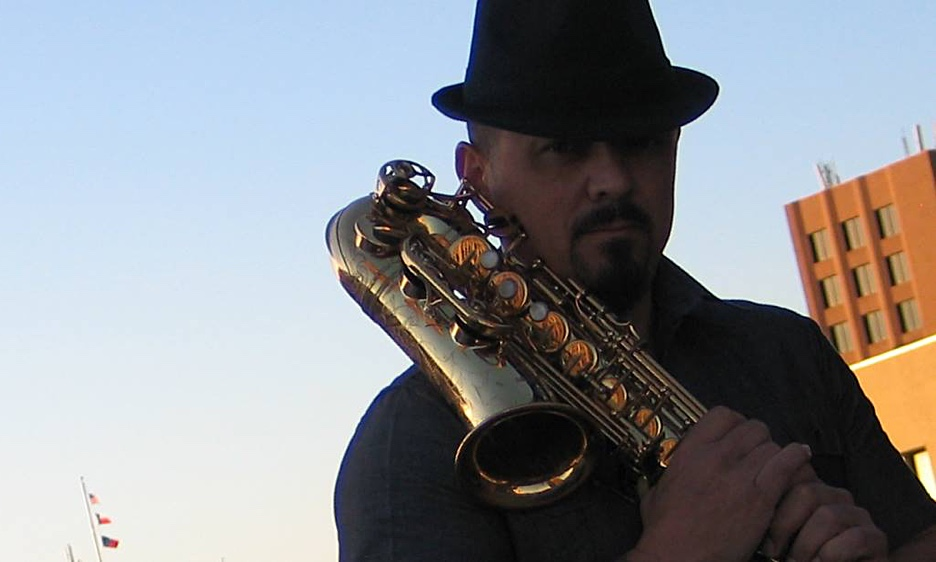 By NOAH PETERSON
February 13, 2014
Sign in to view read count
Meet Noah Peterson:
My first jazz gig was showing up at the U.S Marine Field Band fresh out of boot camp and the Armed Forces School of Music. I was asked if I wanted to be in a combo. I said yes and was told to get a fake book from the supply room. At the time, I had to ask what a fake book was. I showed up to the officer's club and the Staff Sergeant calls out "Ceora." We read the head down and I stopped playing because I didn't what to do no next. The Staff Sergeant—who was playing bass—looks me dead in the eye and says, "Well? Solo!" Tha's pretty much how it has been ever since.

Teachers and/or influences?
My biggest influences have been my musical associates. They are the ones that turned me on to music from around the world that I didn't know about.

I knew I wanted to be a musician when...
I can't say that there was a defining moment. I knew I wanted my life to be an adventure. Music just happened to be the ocean that I'm sailing my pirate ship on.

Your sound and approach to music:
I'm a very inside guy. I'm turning more and more towards melody, hooks, and space. Be-bop is cool, but I've always been a straight-ahead guy. As I play lot of non-jazz music, it is far more suitable for my taste. There's just not enough time to do it all.

Your dream band:
All I want are some guys who are talented and committed with varying skill sets that are vested in the success of the project. That is the biggest dream band ever.

Road story: Your best or worst experience:
I hired a couple of bozos in Boca Raton for a pick-up gig. They talked a good game but they did not play a good game. They got lost so bad on "Summertime" they just quit playing in the middle of the tune. One guy was in the middle of the tune, the other guy was somewhere near the end. Sadly, that wasn't the only time that happened that night, or even in that set. The pianist was lost on a blues! I kept calling the changes out to him and he would yell out "I hear it! I hear it!" yet he remained 2 bars behind. Then he went for the mic to sing a tune and knocked the mic over. Feedback tears through the room and he has to stop playing to fix it.

Your favorite recording in your discography and why?
My Solo Sax Sessions (Self Produced, 2013). Finally my tunes are played correctly! It's techy, it's fun, it's funky, and it's got a variety of music on it.

ADVERTISEMENT
What do you think is the most important thing you are contributing musically?
I write good tunes. Simple, pleasing, good to blow over, and audiences like them.

Did you know...
I love to garden and get a lot of song ideas when I'm tending my plants.

How would you describe the state of jazz today?
Confused. I think jazz is on the right track with the serious outreach in education. The problem seems to be a self-imposed study of the past. The canon of the '50s and '60s has turned into plateau. Those who rejected the funkiness of the '70s got stuck and never emerged. The NY scene had a nice moment in the '90s with a sound that came out, but it seems to have subsided and collapsed back to the "canon." It'll be interesting to see how things go now that the education program is birthing it's first fruits into the industry and life. We'll see if they remain players, fans, and supporters of jazz.

What are some of the essential requirements to keep jazz alive and growing?
Embracing the differences of jazz. The jazz snob thing must die. The cooler-than-you vibe in scenes and among players must die. Celebrate the regional differences. Let artists be artists. Let the '50s and '60s sit on the shelf. Embrace the new composers and play the new tunes on the air. Take a look at other genres and see that they manage to keep things new and current. Nothing wrong with playing the classics, but move to the now, and look to the future. I blame the DJ's. Back off on the John Coltrane and find a saxman from today to give some of that airplay. There's plenty of new artists that need that airplay, Interviews, and they are fantastic musicians. Try some funkier stuff, find some modern straight-ahead. Dump the starts of today that keeping playing yesterdays music. Make them reach and grow.

What is in the near future?
Touring and new records as well. I've got a couple of writing projects going that kick out new recordings a few times a year and I'm always looking to hit the road.

What song would you like played at your funeral?
"Taps." I want a military funeral.

What is your favorite song to whistle or sing in the shower?
I've got a few of my own tunes that stick in my head. Once in a while something from being a kid or high school days but nothing in particular.

By Day:
Music is a day job.

If I weren't a jazz musician, I would be a:
Question does not compute.