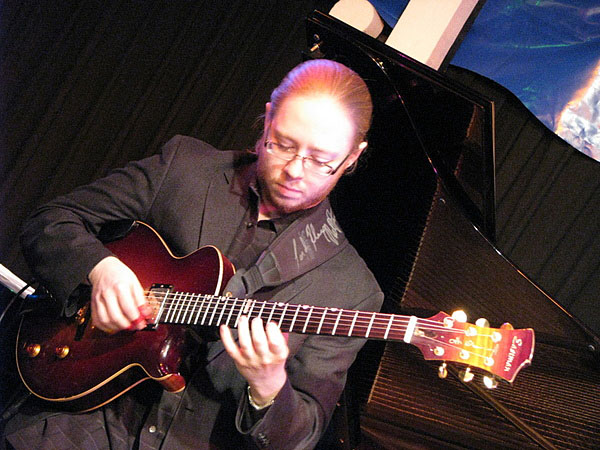 Born into a musical family, Mike has always been immersed in music. He has been playing guitar since he was seven, and his early influences include Stevie Ray Vaughan and Jimi Hendrix. Mike also studied classical piano for 13 years, performing in dozens of recitals and competitions. He won the Nicolas Flagello Piano Competition in 2000 and 2001. Drawn to improvised music from an early age, studies with legend John Patitucci during late high school sparked Mike's interest in jazz.

Teachers and/or influences? This could be a few pages long, but off hand I'd say Strauss, Ravel, Egberto Gismonti, Pat Metheny, Bruce Dunlap, Chopin, Mozart, Led Zeppelin, Dream Theater, Joni Mitchell, Debussy, Brahms, Rage Against the Machine. Julian Lage, who is about my age, has been an inspiration since we were both about 16.

Your sound and approach to music: Specific to guitar playing, I always strive for an acoustic, "real" sound on electric guitar, which I play mostly—not effects-ey and processed. This definitely comes from playing a lot of nylon-stringed guitar—there are so many possibilities for inflection, dynamics, tonal colors, etc. My general approach to music is to never get stuck in one particular genre, constantly surprising myself and trying new things.

Your teaching approach: I always put a strong emphasis on tone quality and good rhythm—with younger students, not even showing a student a written note until they can play some scales, arpeggios and simple tunes with a good sound and in good time. I like to push students to raise their own standards and always strive to improve. I also think it is important to have a balance between learning composed music and working on improvisation.

Tough one—I could say Jan Garbarek on sax, Egberto Gismonti on piano, John Patitucci on bass, and Zakir Hussain on tabla; that would really fun, but I might rather just get some good friends together and hide out for a month in New Zealand or something and just write, play, and breath some clean air.

Road story: Your best or worst experience: Playing in Switzerland, I got really sick right before the hit and had to miss the first set on my own gig! Made it back for the rest of the show, though.

I guess Carnegie Hall is my favorite place to hear music—I've never played in the big hall but I'd love to!

The first Jazz album I bought was: John Patitucci's Communion, and it's still one of my favorites.