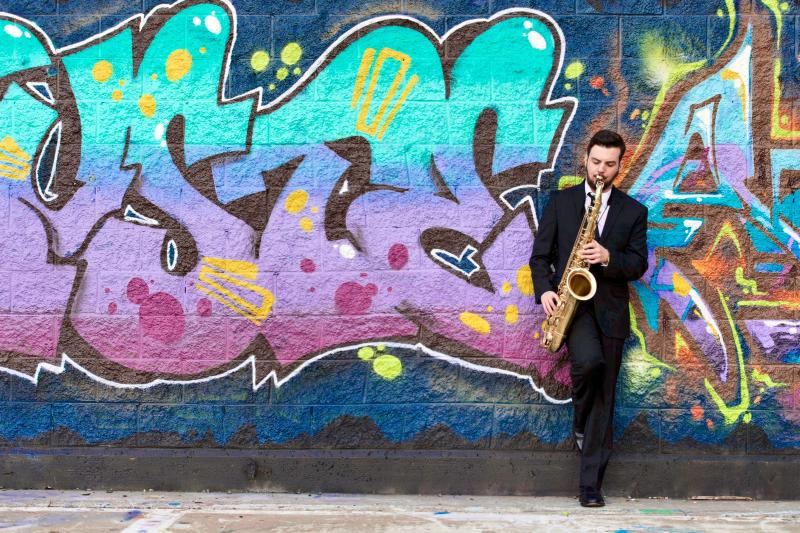 By MIKE CASEY
March 16, 2017
Sign in to view read count
About Mike Casey
Saxophonist, songwriter, and teaching artist Mike Casey has been a fixture on the Hartford jazz scene and beyond since 2011, when he began attending the acclaimed Jackie McLean Institute of Jazz at the University of Hartford's Hartt School. In 2015, Mike was one of 24 young jazz composers worldwide chosen by Jason Moran to participate in the prestigious "Betty Carter Jazz Ahead" Program at the Kennedy Center in Washington, DC where he studied with an all-star faculty including Eric Harland, JD Allen, Eric Revis, Cyrus Chestnut, and Jason Moran.

After a sold out NYC debut at the Minton's in Harlem in September 2016, Mike went on to accomplish an incredible feat: the crowdfunding campaign for his debut album The Sound of Surprise: Live at The Side Door (Self Published, 2017) reached 125% funded. His resume includes appearances with Charles Tolliver, DJ Logic, Brandee Younger, Zaccai Curtis, Tarus Mateen and Marc Cary, whose project "The Harlem Sessions" features Mike as an original member.

Sound of Surprise has gone on to receive international airplay, press, and sales, including a 14 city album release tour throughout the Northeast USA.

I knew I wanted to be a musician when...
My first week at the Greater Hartford Academy of the Arts. It was my first time being around musicians my age who really wanted this music.

Your sound and approach to music.
For sound I've been thinking a lot about onion rings, actually. Crispy and salty on the outside, warm and flexible on the inside. That's what I want to sound like—the "outside" of my tone to have edge and definition—"crispy"—and the core of the sound to be warm and flexible.

I think of music in levels. I do my best to put rhythm, melody, dynamics, phrasing, space, storytelling, emotion, connection of ideas and motific development first.

Your teaching approach
I do my best to guide and not spoon feed them this music, as that actually does the student a disservice. I really believe that to be successful in any artistic endeavor you need cognition and intution, and a lot of curiosity... and if I supply all the information without making them search, they don't develop either.

Favorite venue
Easily The Side Door in Old Lyme, CT. It's really 100% about the music there—the owner Ken Kitchings is a great spirit who accomplished his lifelong dream of building a state of the art jazz club.

What do you think is the most important thing you are contributing musically?
Emotion, honesty, rhythm, and melody.

Did you know...
That at one point, I was dead set on making the NBA? I only started to take saxophone more seriously once I was cut from my freshman basketball team in high school.

Music you are listening to now:
I was just revisiting B.B. King's Live from Cook County Jail the other day. So much pocket...

How would you describe the state of jazz today?
It's in a very interesting place. Very splintered but I guess it's been that way since the late '50s... I think it's fantastic that many more people my age (non-musicians) are discovering this music through cats that have crossed-over like Kamasi Washington and Robert Glasper. I think it's also really important to note that the gatekeepers are basically gone—anyone can put an album out—and that's a beautiful thing. I have to image with all the great music coming out in the '50s/'60s that there had to be a bunch of musicians that never got heard simply because they never got a record deal.

What are some of the essential requirements to keep jazz alive and growing?
I wish jazz festivals and venues that book pop acts to bolster their attendance would realize that doing so is hurting the genre. It really puts a band-aid on the problem, which is audience development. That money that was spent booking Elton John (in my opinion) is much better spent on marketing the festival and starting audience development initiatives in schools and in the workplace. Doing these things would help increase the overall amount of jazz fans who will contribute to everyone's success. When a jazz festival books Slayer (for example) I have a hard time believing that those fans coming for Slayer are going to stay for the rest of the festival and actually check out the jazz groups.

Another thing that I think is really important is that jazz clubs and festivals should really stop their current trend of trying to make everything into a themed tribute to a legend. It might increase ticket sales in the short term, but again—it puts a band-aid on the issue. Lee Morgan is definitely coming from Clifford Brown artistically but when he was active he wasn't doing Brownie tributes...because he was busy being Lee Morgan, and the industry supported him in that. If want this genre to keep growing and not be looked at by the general public as museum music, we need to kick the tribute albums and shows and invest in developing living artists, and invest in playing new original music.

To clarify, history and tradition are very important to me—but I try to use it as a springboard rather than be bound by it. As Donald Byrd used to say "Do AS we did, not WHAT we did..."and those guys were all creating, new, hip, music (with a focus on writing and playing originals)!

What is in the near future?
This Thursday we're closing out part 1 of the album release tour at Luca's Jazz Corner in NYC. I love playing in New York so I'm really looking forward to that!

Next year, I'll be releasing the rest of the songs we recorded that night at The Side Door. We played 16 songs that night and got 14 first takes. Seven are on The Sound of Surprise, and the other seven will come out in 2018 as my sophomore album.

What is your favorite song to whistle or sing in the shower?
Freddie Redd's "Who Killed Cock Robin" from Music from the Connection.

If I could have dinner with anyone from history, who would it be and why?
Charlie Parker hands down. His personality, genius, and story fascinates me.