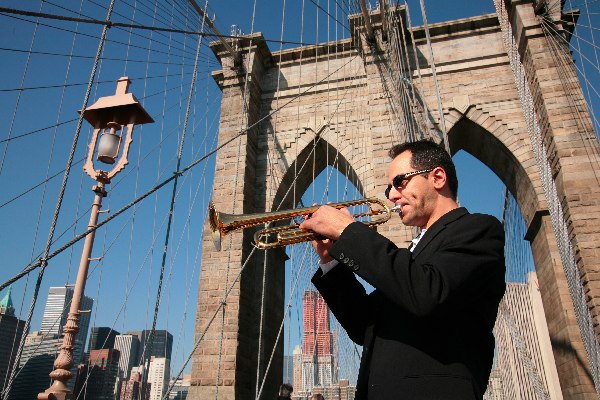 By MICHAEL SIMON
August 8, 2011
Sign in to view read count
Meet Michael Simon:
Michael's musical background goes back to Punta Cardón (his native town), in Venezuela in the 1980s, when he was only ten years old, already jamming with his brothers. His musical studies cover a wide spectrum, first in Cuba where he went to the Ignacio Cervantes music school to study trumpet, and then to the Rotterdam conservatory of music in The Netherlands, where he obtained his arranging and composition degree in 2002.

For the past ten years Michael has traveled all the world's festivals and stages as a sideman trumpeter for Fra Fra Sound, Conexion Latina, Gerardo Rosales and Lucas van Merwijk & The Cubop City Big Band, as well as with his own formations, Crianzas, a multi-origin Caribbean jazz quartet, and Michael Simon & Roots United, a Latin jazz septet with which he release a critically acclaimed CD production entitled Revelaciâ (Pramisi Records, 2004).

Michael continues to stretch his creative boundaries with original works for his own projects and formations.

Teachers and/or influences?
I grew up in a family with musicians, my brothers Edward and Marlon kept a musical environment in the house. They became my inspiration and encouraged me to listen to jazz.

I knew I wanted to be a musician when...
This happened at a very young age, probably at about five or six. My brothers would often rehearse with their Caribbean music band in the house. I was so keen to play that started messing with the percussion instruments. At this time I could not hold myself from joining my brothers onstage at their performances, and after bothering them enough, they let me join them. The experience on stage was the decisive one.

Your sound and approach to music:
One of my first influences was the Miles Davis Quintet recordings done in the '60s. That sound stayed in me and shaped the way I wanted to sound and approach music. It was a marked influence that evolved in me as a particular style with the inclusion of Caribbean music and rhythmic interpretations.

Your dream band:
I love to work with artists that inspire me. Deep knowledge of the genre and the history of it are of great use. It allows an artist to create from a legitimate idiom. Most inspiring artist will not only be able to interpret my music, but will also take it to another place and enrich it.

Favorite venue:
One of the best concerts I did with my group was at the Bimhuis, in Amsterdam. The sound and atmosphere at this place is very good. The audience goes there for the music and knows how to appreciate a live performance. This is uncommon in most Dutch Jazz clubs, but not so in places like Germany and France.

Your favorite recording in your discography and why?
New York Encounter was a very exciting project, in which I had a dream team of musicians that I long wanted to work with. I consider it to be a great step towards defining my voice in the music, and this is also thanks to the contributions from the participating musicians.

What do you think is the most important thing you are contributing musically?
Unknown rhythmic combinations, a warm sounding, jazzy horn-section sound interpreting with Caribbean flavor, hard and smoothly flowing grooves, intricate forms and adventurous motion; are characteristic elements found in my music that are original and contribute to the evolution of jazz and Latin music.