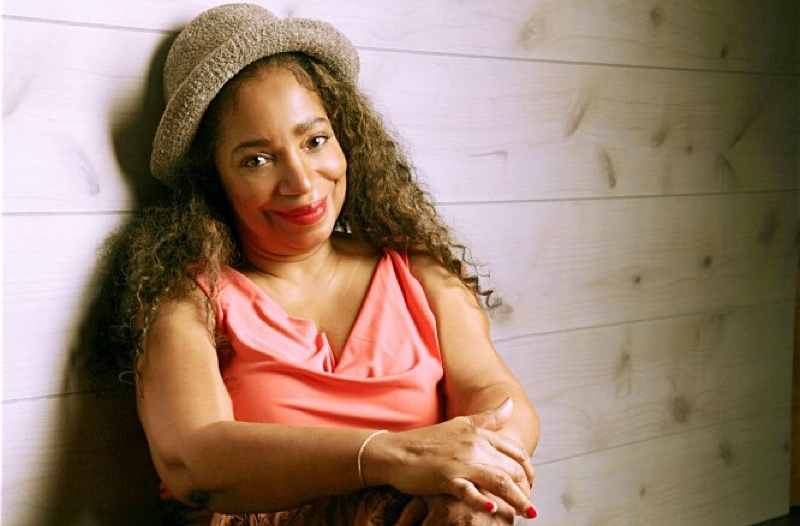 By MERCEDES NICOLE
August 16, 2016
Sign in to view read count
About Mercedes Nicole
Soft-spoken Mercedes Nicole has an intimate and alluring stage presence that reaches out beyond the limits of time and space. Her voice is haunting and arresting, wrapping itself like a comforter around the human experience, encouraging uplift, seeking not only triumph but healing. She is that exquisite mix of a Mezzo-Soprano & Contralto blend that permeates and interrupts one's thoughts. Often with uncanny control...she lingers.

Her own compositions acknowledge life's obscure and melancholy moments that so easily turn into beauty, and life journeys of the many faces of love. Her music exudes strength in the midst of tenderness and often soars so freely that the listener is caught up on wings of mystery and intrigue. It makes sense then that her influences run from Dinah Washington and Sarah Vaughan to Nina Simone and the queen of storytelling, Nancy Wilson, with whom Mercedes shares her birthday.

Nicole's unique infatuation with music began early, but it was always a private affair. At age seven she sat at the feet of her father as he played and replayed the warped albums he treasured of the great women in jazz, Billie Holiday, Ella Fitzgerald, and Sarah Vaughan. Seeing her complete fascination with jazz, her father began sneaking her into clubs in Los Angeles, where she spent most of her childhood, teen years seeing and hearing greats like Nancy Wilson, Bobby Hutcherson and Cal Tjader. However, being brought up as a strict Baptist, Mercedes did not venture into music like her peers in high school or college, but majored in Sociology and Social Work.

In 2000 she met & befriended Seattle's own Matriarch of Jazz Ms. Grace Holden whose father, the late great Oscar Holden Senior, was credited by author & Historian Paul de Barros as "The Patriarch of Jazz in the Northwest. Grace recognized the talent in Ms. Nicole and became a mentor & friend.

Eventually, though, her hidden passion came to fruition and burst into the open. In 2001 she wrote, produced and performed her first tribute to the edgy and provocative Nina Simone at the 300-seat Microsoft Auditorium in the Seattle Public Library. In 2008 and 2009, she debuted her uncanny ability to translate the treasured recordings of Dinah Washington and Sarah Vaughn at Dimitriou's Jazz Alley, a highly acclaimed national stage and a favorite of many of the great touring artists of all genres.

In 2012, hearing of the death of Hall of Famer Etta James, Nicole presented a tribute at the historic Langston Hughes Performing Arts Center to a sold-out crowd. Her new CD, Alignment, is a richly percussive album with an award-winning rhythm section that showcases her unique songwriting and that of her co-writer Peter Tomack.

Mercedes has a rich resonance and fluidity in her voice, and humanly connects to the message birthed in each song, transparently sharing her joy as well as her pain. She loves aligning with the message and deep meaning behind lyrics embracing the tension and rhythms of life that gives magic to each song.

Teachers and/or influences?
Undoubtedly, my strongest influences are Mahalia Jackson, Sarah Vaughn, Nancy Wilson, and Rachelle Ferrell! In that order. Like numerous other African American artists, I grew up in the Black Southern Baptist Church where music permeated my very being. Unfortunately I was not a gifted singer. My voice was soft, and I was plagued with stage fright throughout my childhood, and early adult years. A soft spoken child, with a tiny voice did not fit in well with our particular congregation and it was the furthest thing from the booming voice of Mahalia. To say I was a disappointment to those seeking a closer walk with God via a musical outlet would be an understatement. I had and have the passion and compassion of Mahalia, but did not have the power.

I knew I wanted to be a singer when...
I was perched on my daddy's lap as he listened to album after album of Sarah Vaughn, Ella Fitzgerald, Billie Holiday, and Nancy Wilson. My father was so enthralled and moved by music, that he would spend hours studying the liner notes, and album covers telling me who each musician was and grinning from ear to ear after a particular song, or solo whether it was drum, saxophone, or a vocalist. He loved Miles Davis. I would stare at the photos on the album covers of his favorite singers and yearn to see myself on the cover, mostly because I loved the glitz and glam. Those Diva's dressed like queens.

Your sound and approach to music.
There's something mystical that happens when I sing songs from the '30s and '40s. The sensation of sound vibrating and bouncing around in my mouth truly amazes me. Kia Strauss, Buddy Guy, Kenny Neal and a few more have recorded the song "I Go By Feel," and that's my approach to singing. What really ignited my desire to sing was sitting at the last concert Nancy Wilson did at Dimitriou's Jazz Alley in Seattle in October 2010, and drinking in her amazing storytelling and vocal dynamics. Here I witnessed a woman I had only stared at as a child on my father's album covers, surpassing my wildest imaginations in pose, beauty, grace and delivery. She was so intimately explosive. Like Nancy, I wanted to sing the stories of my life, stories of love, won and lost, and to have fun doing so.

Your teaching approach
I begin asking them what the song means to them. Why they feel compelled to sing the song? Where in the storyline do they connect, and to start from there. In fact, I ask them to never leave that place...that place of connection. It will guide them safely past fear, and embarrassment, and someone will receive their offering with gratitude.

Your dream band
If Rachelle Ferrell was a vocal coach and accompanist I would spend all I had to tour with her. Of the actual band members, I'd love to work with Cyrus Chestnut Trio really, that would be a blast! It would be a dream to record with Wynton Marsalis. Our musical landscape here in Seattle is rich with amazing talent, of all ages, backgrounds, ethnicities, it's just a joy to work with our local artists, so I really have a lot to choose from and really couldn't go wrong, but my dream would be to tour with the Cyrus Chestnut Trio, if only for a season.

Road story: Your best or worst experience
Four months ago I went to New York for the first time to gig. Having never really stayed in New York, the subway experience was a bit of culture shock. Using the infamous Metro Card was a little challenging during rush hour traffic. My particular card wouldn't open the turn gate, so I repeated put it in and ended up using all the money on the card without ever entering the subway! It was frustrating because you need to hit the turn gate a certain way in order for it to turn and let you in. I had an oversized suitcase with me, filled with charts, clothing, and toiletries, and a coat in case the weather turned cool, so I often found myself staring up at mountain of cement steps from three levels down trying to figure out how in the world I was going to get my suitcase and myself up to street level. After the 2nd or 3rd time of feeling helplessly exhausted, a complete stranger would grab my suitcase and carry it all the way to the top, as I struggled to keep up, so i could tell them thank you. The kindness of strangers in a big city like New York blew me away. The gig went well, it was at a little spot on the Lower Eastside of Manhattan called Piano's, almost hidden away, but the stage, lighting, and tech's were awesome!

Favorite venue
My favorite international stage is Dimitriou's Jazz Alley. The venue holds almost 300 people and every seat is good. It's rather plush, beautiful decor, and the sound will knock your socks off. State of the art equipment, great wait staff, just ideal for creating the perfect ambience to set the mood for great music, great food, and great people!

Your favorite recording in your discography and why?
My favorite recording on my discography is "People are Talking" because the music makes you feel warm, arresting, evokes smiles from everyone who hears it. The pianist is Darin Clendenin, Clipper Anderson (bass), Alexey Nikolaev (saxophone), and D'Vonne Lewis (drums). My second favorite recording, on that same project is "I Loves You Porgy" because it's raw with emotion. It's the Nina Simone arrangement, and deeply moving. On Porgy is my pianist, Gregory Smith, Clipper Anderson, and Jamael Nance (drums).

What do you think is the most important thing you are contributing musically?
Acceptance that life is a journey, and everyone's journey should be respected. I 'm authentic. I don't strive for technical perfection, I strive for emotional connection. People walk up to me during intermission, and after my shows and say things like, "Wow, you really understand what I'm going through, or went through" "You voice takes me places I haven't thought about or been in a long time." One gentleman told his wife, I love coming to Mercede's concerts...her music makes me feel good!"

Did you know...
I played drums in 10th and 11th grade, and wanted to be a drummer, but my parents didn't want me hanging around all those boys, so they made me quit. I've never dated a drummer, but they certainly grab my attention!

The first jazz album I bought was:
Well, I'd be more honest if I told you the first album I "stole" from my father was Bob James, Touchdown and the track "Sun Runner" just made me feel like dancing all over the house. I loved the flute and congas on that cut. I would dance till I couldn't dance no more! It was jazz and funky at the same time.

How would you describe the state of jazz today?
I believe we are experiencing a new Renaissance, and it's not just in Harlem, it's globally. People are expressing themselves and embracing themselves through music, particularly jazz. The face of new jazz is exploding with everything from acoustic bass, to opera, Hindu, and American blends that leave you spellbound.

What are some of the essential requirements to keep jazz alive and growing?
More venues that explore not just international artists, but local artists, and talent buyer that will pay artists what they are worth, not just put out a tip jar and have them hope for the best. More jazz education needs to take place, not just with kids, I love kids, but there are adults who because of life twists and turns, missed an entire education on what jazz is and where it came from. 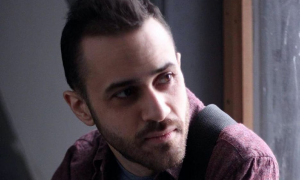