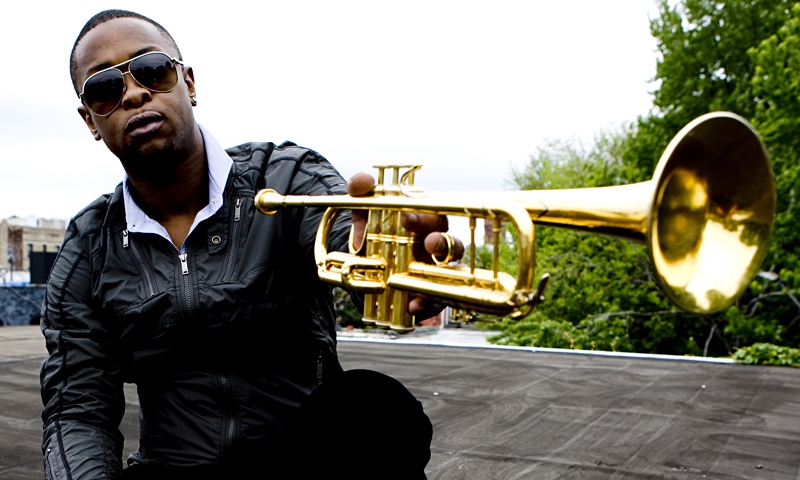 By MAURICE BROWN
March 16, 2017
Sign in to view read count
About Maurice Brown
Maurice "Mobetta" Brown's talent orbits him simultaneously through three worlds: contemporary jazz, blues-rock and cutting edge hip hop. He's a mastermind as a trumpeter, composer, arranger, and producer. When Maurice picks up his horn, his soulful melodies soar into a rarefied space that uniquely marries be-bop to hip-hop and rock, producing his own distinctive sound.

Constant evolution drives him. His intuitive vision lights a fire under traditional jazz, adds sonic brass to rock n' roll and pushes the production tip in hip-hop. Having recently severed ties with Tedeschi-Trucks Band, Maurice "Mobetta" Brown is again charting his own musical path. The years release of album tracks he produced for Talib Kweli, Omar, and Prodigy will make 2017 a long, hot burn. His new album, The Mood was released on March 10, 2017. (Mobetta Music)

Teachers and/or influences?
I've had many great teachers. Keith Anderson, Ron Carter, Wynton Marsalis, Laurie Frink, and Alvin Batiste where the most influential in building me into the player I am today.

Your sound and approach to music.
I feel like every note I play I put my soul into. Whether it's loud, soft fast or slow I want to make it as honest as possible. I believe that I'm a vessel channeling energy from the universe. So instead of fighting the horn I tend to feel more relaxed the more intense the music gets.

Your dream band
Wow, That's a hard question. I've been blessed to work with many great musicians from different genres. I guess my dream band would be like be new Earth Wind and Fire! We would mix all genres and every song would make you groove! Oh wait, That's my band.

Road story: Your best or worst experience
My favorite road story is going to Indonesia to perform at Java Jazz in Jakarta Indonesia.

Favorite venue
My favorite large venue is Red Rocks! I've performed several sold out shows there with Tedeschi Trucks Band. The sound is incredible and it seats 10,000 people.

My favorite jazz club is Jazz Standard in NYC! I like it because of it's intimate setting, and great food!

Your favorite recording in your discography and why?
My favorite recording in my discography is Destination Hope from my upcoming album The Mood. love that song because to be it represents the current mood of this time period. Like no matter how many songs I write I will always remember these days and how divided our country has become. I hope and pray for better days. Destination Hope allowed me to create that place and for that I'm grateful for its existence.

What do you think is the most important thing you are contributing musically?
I think one of the most important things I contribute musically to any situation is my ability to hear the right thing in the right spot and support the vision of the artist I'm working with. As a producer or horn arranger I believe that the whole should be greater than the sum of its parts. The goal is to make it Mobetta.

Did you know...
I lot of people don't know that I'm trained in several martial arts. Karate, Taekwondo.

Music you are listening to now:
Marquis Hill: The Way We Play (Concord)
Terrace Martin: Velvet Portraits (Sounds of Crenshaw/Ropeadope)
Thunder Cat: Drunk (Brainfeeder)
A Tribe Called Quest: We Got It From Here (Epic)
Omar: Love In Beats (Freestyle)

If I weren't a jazz musician, I would be a:
I would be an CEO of a some cool company. I have lots of ideas about things that can make life better for everyone. Would probably dedicate my life seeing some of those ideas thru.