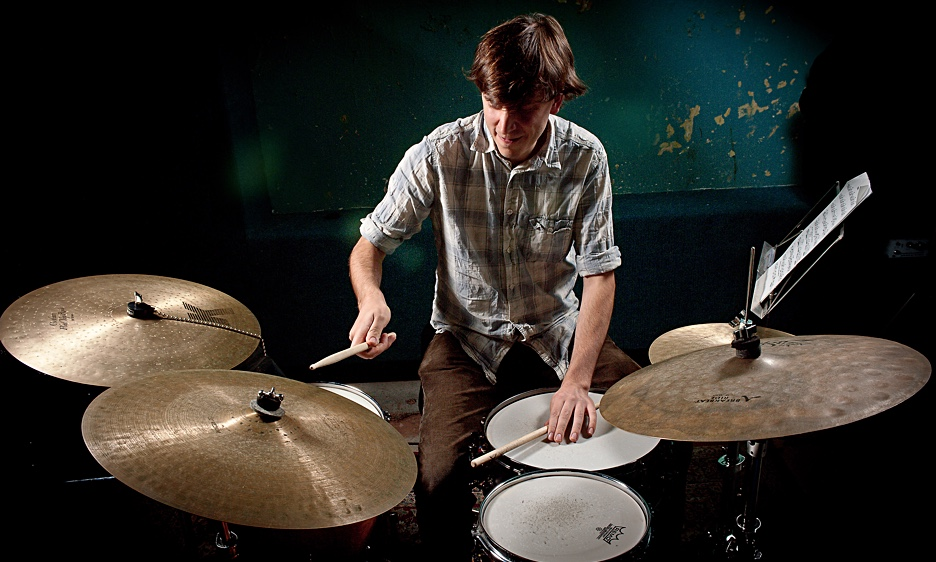 By MARK HOLUB
September 6, 2019
Sign in to view read count

Drummer, composer and bandleader originally from the US and now based in Vienna, he is most notably known as the bandleader and composer for Led Bib.

With Led Bib, he was nominated for the Mercury Music Prize (One of 12 albums of the year) and he was also a winner of the Peter Whittingham Jazz Award. Led Bib have topped college radio charts across the US and Canada and have played live across TV and radio in Europe. They have released 8 albums and have toured across Europe and Japan.

Holub is also active in other projects including Blueblut a power trio with Pamelia Kurstin (theremin) and Chris Janka (guitar) who have toured across Europe, Japan and South America and are about to release their third album, Falb / Holub / Satzinger a new free jazz sax trio from Vienna, Perlin Noise, a contemporary classical/improv ensemble, and he also features regularly on the improv scene with various collections of players including work with Colin Webster, Irene Kepl and many others.

Alongside all this, Mark works as a composer for dance and theatre doing various commissions for numerous companies. He also has worked extensively as a contemporary dance accompanist.

The list of influences is huge, from people like Jim Black and Joey Baron to Roy Haynes, Tony Williams, etc., etc. But I would say the person who perhaps had the biggest impact on my playing as a teacher is Paul Clarvis. I only studied with Paul for a year, but his technical knowledge, his touch and his thoroughly musical and individual approach is something which has stayed with me all these years later.

Hard to say there was a definite time where the switch went on....but I would say for sure my formative years as a teenager listening to Miles second quintet, Frank Zappa and Captain Beefheart certainly sent me on that road.

I try my best as a drummer to inspire the musicians I am playing with to play their best. My goal as a drummer is to play what suits the music rather than to play any set patterns as such.

I don't really do a lot of teaching, but when I do, I try my best to broaden a students horizons and to encourage them to find the music and approach that most interests them.

As a bandleader I try not to think about bands in this way. My joy in making music lies in working with people who I love and respect. I have always been someone who enjoys the development of an ensemble, and you are really only able to do this when a group of musicians is given enough time to play together, so my dream bands are really the ones I am playing in.

On the bad side there are so many to choose! I remember on one Led Bib gig years ago, Liran and I were sharing a room in a hotel, and instead of normal skylight, it had basically a hole punched through the ceiling....it was so cold in the room that we tried to heat the room by running the electric kettle with the lid off. The next morning the fire alarm went off and we all had to evacuate the building, but the other boys just stayed in their bed....probably frozen solid from the night before. Thankfully they survived and lived to tell the tale.

Again, there are of course loads, but for its special location and lovely treatment I would have to say the Broomhill Art Hotel in Barnstaple, England.

Well, that's always for me the latest thing I've done! So, I am very excited about the new Led Bib album It's Morning coming out this month!

I am trying my best to communicate a joy in playing music.

That I don't drink coffee?

I think that there is a lot of interesting music going on under the banner of jazz these days. Since I started out though, there seems to be less and less venues to play, and less cash around. That said though, artists always manage to find away and I am heartened by the many younger people who are running their own nights and putting out their own records.

Obviously the new Led Bib record, It's Morning is out in a few weeks, as well as the first shows playing it, along with this amazing film made by Dylan Pecora. Also, there is a new record coming up from Blueblut Andenborstengürteltier as well two debut records from Falb / Holub / Sazinger and Perlin Noise. Colin Webster and I are touring in Germany and Poland at the end of the year, and Blueblut will also shortly be heading out on tour.

That some random bit of drum hardware is going to break. I once had a chain break on a bass drum pedal and then had to do the rest of the gig without the bass drum....it's haunted me ever since.

This has become less and less in recent times, but in the past I used to work as a contemporary dance accompanist playing drums and piano at various conservatories and colleges around London. I still do these days, but it is quite infrequent, and not really a day job.

A postman, a job I very much enjoyed while I was studying.