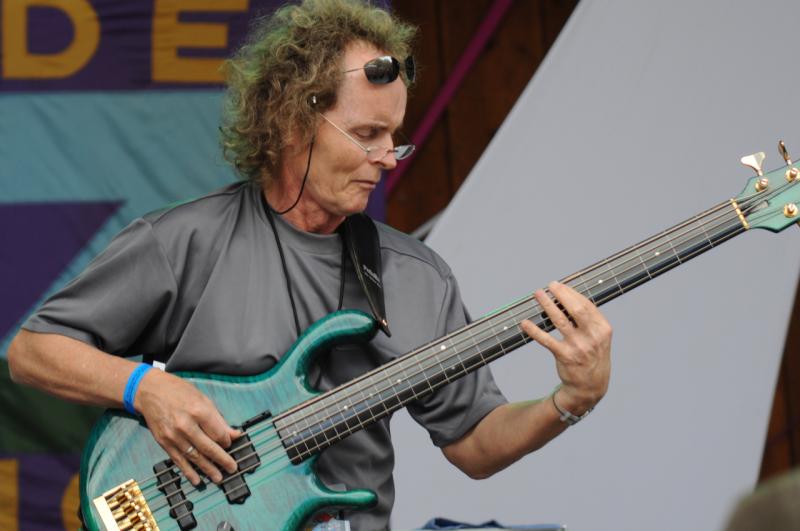 By MARK EGAN
August 22, 2014
Sign in to view read count
Meet Mark Egan:
Over the past 30 years, Mark Egan's ability to groove, perfectly complement the music in any situation and solo expressively has made him one of the most in-demand bass players on the international music scene. While racking up credits with the likes of the Pat Metheny Group, saxophonists Steve Grossman, Dave Liebman, Stan Getz, Sonny Fortune and Bill Evans, vocalist Michael Franks, guitarists Pat Martino, Larry Coryell, John McLaughlin, Alex de Grassi, John Abercrombie, Chuck Loeb and Vic Juris, the Duran Duran off-shoot group Arcadia, the Gil Evans Orchestra as well as pop stars Sting, Joan Osborne, Sophie B. Hawkins, Marc Cohn and Roger Daltry, Egan also went about documenting his singular fretless bass guitar voice in a series of recordings as a leader beginning with his 1985 bass manifesto, Mosaic.

Following on the heels of 2010's Truth Be Told (his quartet recording with saxophonist Bill Evans, keyboardist Mitch Forman and drummer Vinnie Colaiuta) and 2013's trio offering Unit 1 (with guitarist John Hart and drummer Karl Latham), Egan reconnects with his Pat Metheny Group/Elements band mate, drummer Danny Gottlieb, and keyboardist Forman for an invigorating program that highlights the bassist's signature singing fretless 5-string tones in both funk and impressionistic settings. The 20th album on his own Wavetone label, About Now is a stunning trio outing that has Forman alternating between piano and Fender Rhodes and the telepathic rhythm tandem of Egan and Gottlieb holding down the fort while also contributing potent solos and highly interactive playing throughout.

I knew I wanted to be a musician when...
When I received a trumpet in the fourth grade.

Your sound and approach to music:
I was originally a trumpet player and studied music at the U of Miami. I changed my principal instrument to bass and transferred all the harmonic and melodic knowledge from my trumpet experiences. I enjoy playing creative improvisational music with musicians that are looking to share the same.

Your teaching approach:
My approach is to inspire the student to want to practice and lead them in the directions that will nurture their talents. I try to teach the students to become their own teachers and impress the importance of the hard work and dedication that it takes to get there.

Road story: Your best or worst experience:
Best Experience. Playing with Sting and the Gil Evans Orchestra in Italy for fifty thousand people.

Worst Experience-rolling over the guard rail in our van into a ravine while on tour with the Pat Metheny Group due to icy road conditions in Ohio in the mid 1970's. Luckily no one was hurt and we got towed out without any problems.

Favorite venue:
The Bottom Line in NYC with The Pat Metheny Group. It is no more....

Your favorite recording in your discography and why?
My latest release, About Now featuring Danny Gottlieb-Drums and Mitchel Forman-Keyboards. There is a great chemistry with the trio and the sound of the recording really came together with the help of engineer, Phil Magnotti. It features all of my original compositions. The trio has flexibility and a sense of adventure.

The first Jazz album I bought was:
Miles Davis, Kind of Blue

What do you think is the most important thing you are contributing musically?
I'm trying to shape an individual sound on the bass as well as composing songs that allow the players to express themselves individually as well as collectively to develop a group sound. I like to go for it and be around musicians who have the same sensibilities.

Did you know...
I was originally going to study oceanography until I realized that I wasn't a biologist... but a musician

How would you describe the state of jazz today?
Alive but struggling due to the fact that it's difficult financially to tour and so much music is digitally pirated. There are a lot of great players all over the world but many fewer venues where they can perform.

What are some of the essential requirements to keep jazz alive and growing?
Great creative players that want to take music to different places. An audience that wants to listen to the music. Venues where the music can be heard.

What is in the near future?
I have a new recording just released called About Now. It's a trio with Drummer Danny Gottlieb and Pianist Mitchel Forman. It's receiving heavy airplay at the moment. We will be touring to promote the release.

I will also be performing with the Group, Unit 1 featuring Karl Latham-drums and John Hart-Guitar. We recorded a Cd last year that was very successful and was voted as one of the top 50 releases of 2013 as well as a top pick in Brazilian Jazz.

Later this year I will be releasing a CD with the group called Constellations which features our impressions of the music of Icelandic pop star Bjork. That group is with Karl Latham, Ryan Carniaux, and Nick Rolfe.

I am composing more music for my trio with Danny and Mitchel for a CD to be recorded later this year and to be released in early 2015.

What's your greatest fear when you perform?
If I'm reading music... that the music will fly away. This happened at the North Sea Festival in Israel while playing with the Manhattan Transfer at the beginning of the set. I had to read over the shoulder of the tenor saxophonist in Bb.

What song would you like played at your funeral?
"Flamenco Sketches" from Miles Davis's Kind of Blue

What is your favorite song to whistle or sing in the shower?
Any song by Charlie Parker

If I weren't a jazz musician, I would be a:
Fisherman.