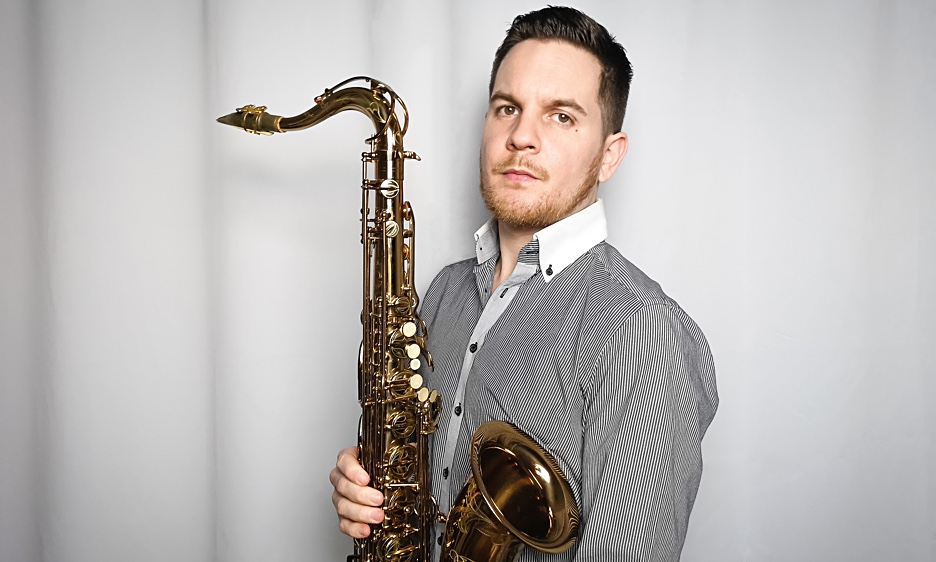 By LUKAS GABRIC
April 12, 2019
Sign in to view read count
About Lukas Gabric

Saxophonist, musicologist, and composer Lukas Gabric began his musical education at the Conservatory of Carinthia in his native country, Austria. He holds a Bachelor of Fine Arts from the New School University in New York, a Master of Arts from the City College of New York, a postgraduate Artist Diploma from The Juilliard School, and is currently pursuing a PhD in musicology at the City University of New York's Graduate Center. Mr. Gabric was selected as a member of the European Generations Unit 2012—an ensemble consisting of winners of the Swiss Generations Competition. In 2013, he was a semifinalist in the Thelonious Monk Competition in Washington, D.C., placed third in the North American Saxophone Alliance Competition in Urbana-Champaign/IL 2014 and received the Best Soloist and Audience Choice Awards at the Getxo Jazz Festival 2014 in Spain. Mr. Gabric's composition "Fire Dance" was awarded an ASCAP Herb Alpert Composition Award in 2016. While maintaining a busy international performance and recording schedule, Mr. Gabric teaches music history and theory at the City College of New York and serves as saxophone faculty for The Juilliard School's Music Advancement Program. He recently published an article on hermeneutics and jazz in the peer reviewed Jazz Perspectives Journal and his album Labor of Love (released February 2019) has already received international media attention. Mr. Gabric organizes an international jazz saxophone competition and masterclass series every summer in the south of Austria.

My main instrument is the tenor saxophone, but I also play alto on occasion -predominantly for "classical" and "new music" works. I also double on flute.

Some of my early teachers in Austria, like Harry Simschitz and Michael Erian, had a profound influence on me. When I came to the US to study, I was very fortunate to take lessons with incredible players such as Joel Frahm, Walt Weiskopf, Eric Alexander, Steve Wilson, Ron Blake, Rich Perry, Billy Harper, John Patitucci and many more. All of them helped me to become the player I am today and there are many specific things that each one of them has helped me to cultivate. In terms of other influences, I continue to be obsessed with Dexter Gordon, John Coltrane, Sonny Rollins, Stan Getz, Joe Henderson, Michael Brecker, George Coleman, Seamus Blake, Joshua Redman, Chris Potter, Ralph Bowen, and many others.

I heard a recording of Paul Desmond playing "Somewhere" from West Side Story with the Dave Brubeck Quartet when I was six and knew that there is nothing more beautiful that I could pursue in life.

I want my notes to be painted on my air-stream, if that makes sense. In other words, I think audible air-stream first, notes second. That doesn't mean that I don't think deeply about my note choices but that I envision the air stream as a constant entity like a painter's blank canvas onto which I add notes. I always strive for my sound to be big, and resonant in all registers, even when I'm playing softly. I think articulation is an often overlooked component of an artist's "sound." In consequence I use my tongue very judiciously. My general approach to music is altruistic. I want listeners to experience something that they can take with them when they hear my music whether live or on record. I'm not a big fan of innovation for the sake of innovation but believe that new things can be found through intensive study and diligence. I've been teaching music history classes at the City College of New York for seven years now. Getting to know renaissance, baroque, Galant, romantic, etc. music on a deep level has taught me innumerable things that inform my understanding of jazz. Knowing history is an incredibly advantage and I believe that the further one can look back the further one can see into the future.

As a teacher I see myself almost like a doctor or a soccer coach. Besides my teaching job at The City College of New York, I also teach saxophone students and studio classes at The Juilliard School's Music Advancement Program. The doctor approach comes into play with new students. In that context I "diagnose" students to alleviate "symptoms" and "prescribe" exercises that improve their improvisatory or saxophonistic "health." The soccer coach way of teaching pertains to preparing students for auditions, competitions, recitals, and other sorts of performances. In general, I like to inspire my students to be the best versions of themselves they can be and to interest them in aspects of music that they might have not thought about or heard of before.

There are far too many people to list in this category. I hope to continue to work with the people who I already collaborate with. I don't subscribe to the whole idea of jazz stardom because skill and fame don't always correlate as they should. I'm always excited to perform with someone who can really play, and I don't care much about them having the biggest name.

I think that what we really contribute in jazz is our own sound. After all we all have the same twelve pitches at our disposal. In that sense it's all about how you say things musically and not always about what you say. With my new album "Labor of Love" I hope to bring a little more sophisticated simplicity as well as a concern for melody to contemporary jazz. I've been missing these elements in many current releases lately.

Four -Joe Henderson with the Wynton Kelly Trio. I must have listened to this album about a million times. I got it when I was fourteen and I still think it's one of the greatest albums of all time. The hook-up between Jimmy Cobb and Paul Chambers is unreal on this album. The extensive solos Henderson takes on the album never lose their narrative focus as he guides the listeners through so many unbelievably diverse and fascinating soundscapes. It's also a great document featuring his incredible time feel and ability to completely let go and return with the strongest and clearest material imaginable. His pallet of musical detail is also phenomenal along with his imaginative interpretations. Kelly adds incredible flow and momentum with his comping and never fails to find the perfect voicing for Henderson's musical utterances.

Michael Brecker: Time Is Of The Essence (Verve Records)

It's very hard to make a statement about a term that is on one hand not accepted by some and that has on the other hand become such an all-encompassing descriptor. I think that the root of the question inevitably leads back to a definition of jazz, which seems like a futile endeavor these days. I like to believe that it's the idiosyncratic elements of jazz that make it unique and distinct from other genres and idioms. What I consider jazz or part of the realm of jazz today, generally seems to center around a concern for virtuosity and complexity at the expense of sacrificing lyricism. I also find that too often we hear performers approximating a style rather than being true to what they hear inside their musical minds while improvising. There are also many political aspects which are amiss in jazz which are in turn manifestations of larger issues.

I think we have to focus on how we present ourselves as jazz artists and think about our listeners more. If someone chooses to go to a concert in their scarce free time and pay good money for it, then we shouldn't present some sort of ego-driven musical ivory tower pursuit that completely alienates the consumer. I'm all for having idealistic and art-focused musical goals, but if we completely lose our audience then who are we going to play for and how will we survive? While it's difficult to accept for some, I think it is really important to keep in mind that we are on some level entertainers. Striking the fine balance between art and entertainment is an added complexity of our job, but one that we cannot neglect. I also think that artists have to figure out a way to monetize the recording sector again. I see this as the major challenge of this and the next generations of musicians.

I'm doing a lecture recital about the Great American Songbook and how it has influenced jazz composers of today. The lecture recital will be held/performed at Elebash Hall at the CUNY Graduate Center in Manhattan in late April. In May I'm flying to Mongolia, South Korea and China for performances and workshops. After my five weeks in Asia I'm going to Europe to teach at a workshop in the south of Austria in early July, followed by a tour in Germany. My stay in Europe in July concludes with the saxophone competition I organize in Austria and a big band feature performance at Porgy and Bess in Vienna. After all that I'm returning to NY to teach at a summer camp and judge an international competition before the academic year starts up again. To sum up, a lot of playing and teaching. I'd like to record another album this year but I'm just in the very early planning stages.

I had an amazing biology professor in high school who inspired me so much that I would have taken up his field if I hadn't been set on music already at that point.

The first person that comes to mind right now is Freddy Mercury. I think he would be a lot of fun to hang out with and he strikes me as one of the most confident and uncompromising people ever in entertainment.