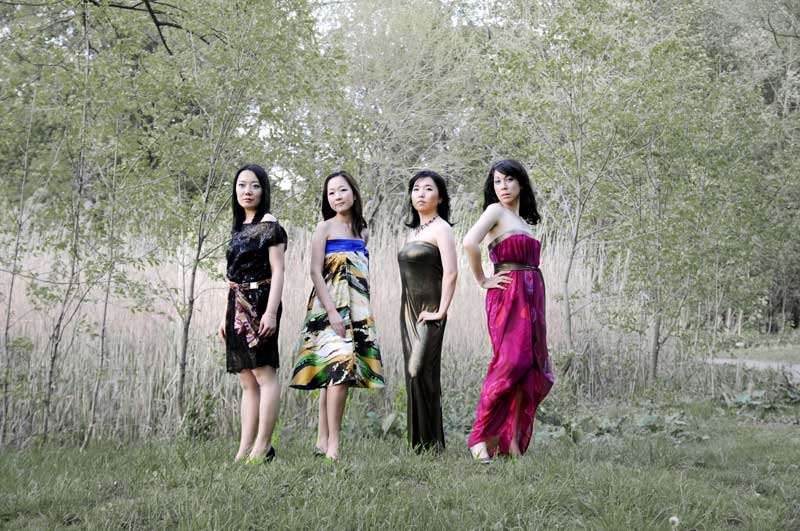 view slideshow
By LOLA DANZA
December 31, 2011
Sign in to view read count
Meet Lola Danza & JANYA:
In Sanskrit, JANYA means to be born, while in Korean, JANYA means around dawn. JANYA was created by four unique musicians— all derived from Korean descent and all women. The music is a fusion of East and West. The East: Seungmin Cha- Daegeum, Eun Sun Jung- Gayageum and Woonjung Sim- Janggo. The West: half-Korean American Singer Lola Jung Danza. Something magical exists between these four musician women and so, JANYA was born, around dawn.

Lola Danza is half-Korean and born in the USA. Danza has a Bachelors degree from Berklee College of Music and a Master's degree from Aaron Copland School of Music. She has toured all over the world with her own musical projects and has played with legendary musicians including Ornette Coleman, Steve Kuhn, Sheila Jordan, Lewis Nash, Bob Moses, John Lockwood, Ben Monder, Mat Maneri, David Tronzo, Bob Gullotti, Luciana Souza and Leni Stern, to name a few.

Woonjung Sim is a percussionist working on her Master's degree at Seoul National University and is a team member of Gong, which plays musikdrama. She plays not only traditional music but also theater music and contemporary music. She has a wide musical range and incredible performance skills.

Emerging as one of the most influential experimental daegeum (transverse bamboo flute) artists, Seungmin Cha was trained in traditional music and its discourse. A graduate of the School of Music at Seoul National University, Cha has developed her career as a solo daegeum artist, as well as a composer and illustrator.

JANYA has performed at the Kennedy Center in Washington D.C. They have also played all over New York City at various clubs and theaters.

I knew I wanted to be a musician when...
I was a young child. I grew up around musicians, my father—Lawrence W. Danza (composer, big band arranger, guitar, Berklee '82)—and grandfather/pianist Lawrence J. Danza.

Your sound and approach to music:
The East-meets-West band JANYA is inspired by Korean Traditional Music and the ideology of Ornette Coleman and John Zorn. Korean/American Singer Lola Jung Danza went in search of her Korean ancestry; what she discovered was a whole new world of music. All About Jazz calls JANYA a "Communion with the divine."

With her four-octave range and vast array of vocal technique, Lola Jung Danza summons her ancestors through this music, taking the listener on a journey to the far off land of Korea, laying beautiful poetry over traditional Korean instrumentation.

JANYA is an all-female group, and celebrates women in music and culture. The music ranges from the meditative to the dramatic—it's something you've never heard before and it's as if these women are speaking directly to the heavens. JANYA is paving new ground in music. Please join us in a beautiful evening of music.

Your favorite recording in your discography and why?
Our first self-titled album, JANYA is very special as it was completely improvised. Find it at CDBaby.

The first Jazz album I bought was:
Anita O'Day, Taking A Chance on Love.

What do you think is the most important thing you are contributing musically?
The search; I think the fact that we are constantly searching for something new in music. We're looking for more.

Did you know...
JANYA met through bassist Sean Conly.