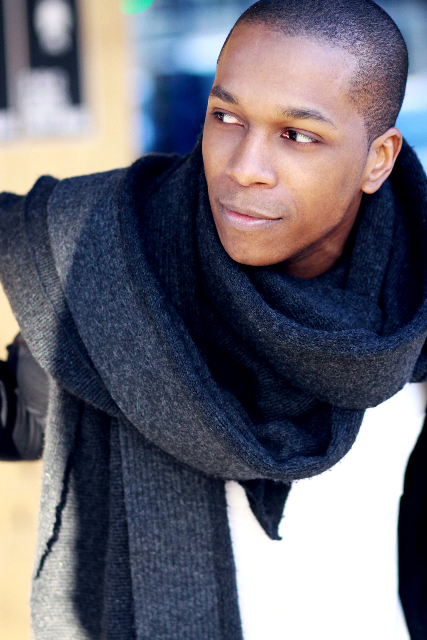 This winter Leslie will star alongside his friend Lin Manuel-Miranda in one of the most anticipated theater events of the season as "Aaron Burr" in Miranda's Hamilton at The Public Theater in New York City.

Teachers and/or influences?
My 6th grade Jazz Band teacher (I played trombone and sang lead vocals) heard the tone and timbre of my voice. He put a copy of The Best of Donny Hathaway in my hands and I was never the same again.

I knew I wanted to be a musician when...
In school, I got in lots of trouble as a kid. I got the sense that I wasn't very well liked by many adults. Looking back, I don't blame 'em one bit but...it seemed to me that their feelings about me changed when I had a mic in my hand and I was singing a tune they liked. Music could do that. It was a common ground where there was seemingly none.

Your sound and approach to music:
In school, I got in lots of trouble as a kid. I got the sense that I wasn't very well liked by many adults. Looking back, I don't blame 'em one bit but...it seemed to me that their feelings about me changed when I had a mic in my hand and I was singing a tune they liked. Music could do that. It was a common ground where there was seemingly none.

Your favorite recording in your discography and why?
We recorded a Frank Loesser tune for the album called "Joey, Joey, Joey." I've heard maybe 20 versions of the song over the years and though I always liked it it was never a song I thought I wanted to sing. It's my favorite song on the album, not only because we found a key and arrangement that fit like a glove, but because it was such a surprise to me.

The first Jazz album I bought was:
Bought a bunch of Ella recordings. Mind was sufficiently blown. I was maybe...11?

What do you think is the most important thing you are contributing musically?
The closer a performer gets to knowing who they are and where they've come the more irrelevant a question like this becomes. No offense! ;) The stamp you leave on your music comes out of the personal and specific details of the unique life that only you've led. When we're doing it right there's always only one of each of us.

Did you know...
I was always a singer first. Happily and luckily fell into acting, as an extension of music, in my late teens. Grateful for the journey though. It's tough. Ups and downs are tough for sure. But I'm loving the variety I've been able to cultivate in my career so far.

What are some of the essential requirements to keep jazz alive and growing?
We have to remain citizens of the world. We have to deliver art and music that feels essential. We have to speak to the needs of the people. Things that are are necessary survive.

If I weren't a jazz musician, I would be a:
Chef/World-Changer