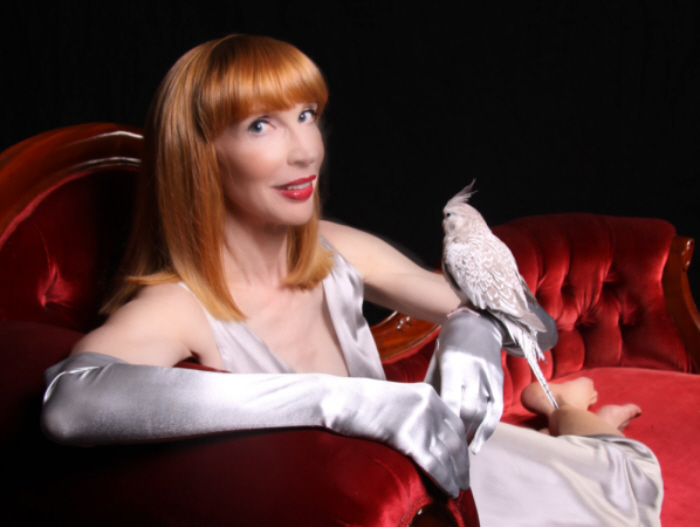 By LAURA AINSWORTH
September 19, 2011
Sign in to view read count
Meet Laura Ainsworth:
I was born in Los Angeles but came to Dallas as a tot when my dad, jazz sax/clarinetist Billy Ainsworth, relocated to become a part of the growing commercial recording industry. Came up in the music biz (details to follow!). Graduated from the University of Texas at Austin with a B.S. in Radio-TV-Film. Worked on staff and also as a freelance writer for jingle/broadcast services company TM Productions, where I met my husband-to- be, Pat Reeder. Together we write a syndicated topical humor service for radio stations called The Comedy Wire and also provide material for a produced, three- times-a-day radio show, The Huckabee Report. For most of that time, I've been writing and performing my own song parodies that have been heard on radio morning shows worldwide, performing in musical theater and clubs, and creating jazz musical revues and a show called Keep Young and Beautiful, about the obsession with youth and beauty that consumes our shallow little lives.

Until now, most of my work as a singer has gone out into the ether, but my debut CD, Keep It To Yourself, changes that!

Pat and I live between Dallas and Ft. Worth, with 16 very musical parrots.

Teachers and/or influences?
First would be my dad Billy Ainsworth, of course, not as a teacher but in introducing me to the world of classic big band jazz. (He started at age 17 in the sax section of the Tommy Dorsey band and through the years played with Freddy Martin, "Tex" Beneke and numerous others.) My earliest musical memories are of beloved albums by Peggy Lee, Frank Sinatra, Ella Fitzgerald, Tony Bennett, Mel Torme and Nat King Cole. Later, when my dad was in the Jerry Gray Orchestra at the Dallas Fairmont Venetian Room, I actually got to see him accompany some of these legends live, on "comp night" for band members' families! This was in an age when most kids were listening to rock and pop.

Of course, the aforementioned Miss Fitz and Peggy Lee were hugely influential, as well as Keely Smith, Lena Horne, Rosemary Clooney, Doris Day and Dinah Shore. (Another major influence, the young Judy Garland, will be discussed under "My Sound.") I've recently started appreciating Annette Hanshaw, in part because of her sense of humor, and Ruth Etting. More modern influences include Sade, Anita Baker, Anne Hampton Callaway (great singer known best for her TV theme for The Nanny), Mary Cleere Haran (how tragic that she passed away recently), and Maureen McGovern, whom I consider to be right up there at the top of the singer pyramid.

My dad did have one bias that admittedly held me back during my early years of singing. He was so afraid of me "overtraining" and ending up sounding too "legit" that he discouraged me from studying voice in my teens. My loss! It would've been better just to find the right teacher.

That said, as far as I'm concerned, the best voice teacher in the world for me is the one I finally found: Dr. Sam Germany, director of the music department at Cedar Valley College in Lancaster, Texas. I discovered him while appearing in a show he was directing at Family Music Theatre in Lancaster. His understanding of the female voice in all its incarnations is absolutely stunning. How does a man "get" that?

I'm also grateful to Betty Buckley for some insights that helped me with the recording of Keep It To Yourself. Overall, though, I've learned through experience that a teacher's own celebrity status and personal credits have little to do with his or her ability to teach voice in a productive way. Enough said.

I knew I wanted to be a musician when...
I knew by age six, when my sister and I used to go with our mom to see daddy at the recording studio. (We'd meet him there at the end of the day and then all go to dinner at the now-defunct Casa Dominguez in downtown Dallas.) I essentially grew up in a recording studio. Seeing the singers at work, even if it was just singing radio station call letters, was fascinating to me. Of course, there were always other things I wanted to be as a child, but music was the constant.

Your sound and approach to music:
I sing like an old-style band singer, like Doris Day, Rosemary Clooney or Margaret Whiting, with sultry shades of Lena Horne or Julie London that come through because of the mezzo quality of my voice and also my choice of material, which leans towards the torchy. I sometimes call myself "a big band singer in a downsized era." My #1 vocal idol is Ella Fitzgerald. But my greatest vocal model wasn't really a band singer, or even a jazz singer per se; that honor goes to the young Judy Garland, particularly in the way she interpreted wistful ballads like "Somewhere Over The Rainbow" and "You Made Me Love You." As Judy got older, of course, she became more belty and brittle (still great, in a different way), but her young voice was supple, rich and charged with emotional undercurrent. That's what I strive for. That's also what made Frank Sinatra so great: it wasn't just his musical tone; he was a great actor who could convey the full emotion of any lyric.

I try to stay true to the song, rather than "making it my own" the way they're constantly urged to do on American Idol. Oversinging, empty histrionics, unintelligible lyrics, and production fakery are avoided like the plague. Isn't it great when someone like Adele stands alone at a microphone and delivers a song simply and evocatively? When you as the listener are moved by something deeply expressed? How often does that happen anymore?

One note on choice of material: I get a charge from finding obscure gems and giving them a fresh treatment. For example, "That's The Kind Of Guy I Dream Of" was big and brassy as a B-side for Betty Hutton in 1952, but with my smoother interpretation and Brian Piper's killer jazz keyboards, it now has more subtlety and swing. And Helen Kane's 1928 hit "He's So Unusual" takes on a hilarious new meaning in the modern age.

Your dream band:
I had my own little dream band on Keep It to Yourself! For that I credit producer Brian Piper, who knew exactly what I wanted and brought in the right musicians to achieve the effect. Dallas has some of the best jazz musicians anywhere, thanks in large part to the legendary jazz program at the University of North Texas. Brian's own Brian Piper Trio (with John Adams on bass and Mike Drake on drums) served as the core band for KITY, with guest artists Chris Derose on acoustic guitar for "Skylark," and Noel Johnston on electric guitar and Chris McGuire on sax and clarinet throughout. Violinist Milo Deering of the jazz/bluegrass fusion group Beatlegrass contributed just the right flair to "La Vie En Rose." They are all just stunning.

Of course, my ultimate dream would've been to have my dad come in on sax and clarinet, but because he died way too young in 1984, that wasn't exactly in the cards. That said, I have to rave that McGuire was the perfect "sub" for my pop.

For something different in the way of a dream band, it would be enormous fun to sing with a funky little group like Leon Redbone's. One thing I do miss on Keep It to Yourself is some tuba! I'd love to sing "I Want To Be Seduced" with a tuba. (Hold on—did I just say "seduced with a tuba"??)

Road story: Your best or worst experience:
My favorite gig was performing Cole Porter music at the Arkansas Governor's Mansion a few years back. It was Christmas, the mansion was beautifully decorated, and my partner in the show and I were treated like visiting royalty. The Christmas parties were Gov. Mike Huckabee's way of saying goodbye and thanks to his cabinet and staff as his 10 years in office came to an end, so the atmosphere was special and emotions were high. My husband flew up for the final show, and we stayed in Little Rock for a few more days and had a mini- vacation. The governor even invited us to a lavish dinner/dance while we were still in town, featuring his own band, Capitol Offense. The Governor plays electric bass, and quite well!

Our association with Gov. Huckabee continued, and today we contribute material to his Huckabee Report radio show. He even said that if he ever became President, I would sing at the White House. But then he decided not to run, foiling my diabolical plan for world musical domination!

Favorite venue:
In general, that would be any venue in which the audience is there for the show, not just to yak over background music. In Dallas, jazz is usually background. Too bad. But there are some good new local venues popping up for listening, like the Kessler Theater. I hope that trend continues.

Your favorite recording in your discography and why?
That's a tough one, because I only record songs I'm crazy about. But it might be the title track from