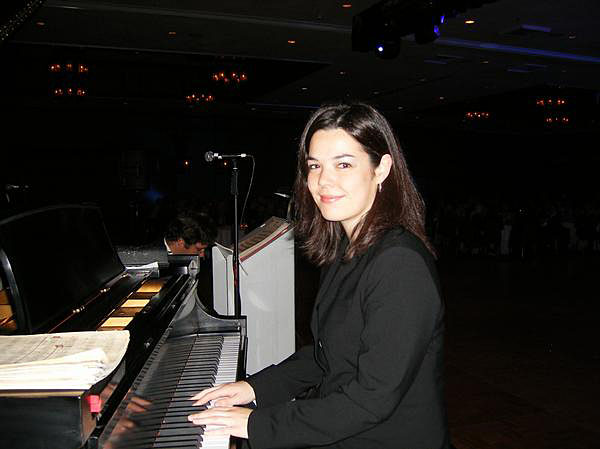 I knew I wanted to be a musician when... I heard jazz.

As a composer/bandleader, I cannot express in words what it feels like when your music is brought to life and conveyed by such amazing musicians. I'm grateful to them.

Road story: Your best or worst experience: I had a gig down in Baltimore with the Cab Calloway Orchestra. We left early in the morning from New York City. When my ride came to pick me up, I saw my ex-boyfriend (also a musician) sitting in the van. He was not a regular band member, so I was not expecting to see him. It was awkward, because we had just broken up the day before. It took us about five hours to drive down to Baltimore, we played the gig together and then drove five hours back to NYC. Musically, the gig was great but man, what a long day!

Smoke Jazz Club is my favorite venue to play and hang at in NYC. It's like a second home, really! The owners always have a good vibe and really know how to treat the musicians. Also, the acoustics are great and piano is very clear.

Your favorite recording in your discography and why? Kelly Powers Trio, featuring Samir Zarif on tenor sax, Matt Aronoff on bass and Kendrick Scott on drums. This was self-released in November 2006. I felt the band played my arrangements well and brought my original compositions to life. It felt real inspired and honest. Speaking of honest, this is my only album which is why it's my favorite.

The first Jazz album I bought was: David McKenna, recommended to me by a teacher at the time. It was okay, but didn't really love it.

What do you think is the most important thing you are contributing musically? I have great respect for the lineage of all jazz artists that came before me (especially musicians like Jackie McLean, Sonny Clark and Hank Jones, to name a few). As a young musician, I want to give back and keep this music alive. I'm not trying to break down walls with earth-shaking, innovative music. I think there are too many young, student-type musicians who just sound foolish thinking they are playing hip and new stuff. Man, I just want to keep playing the blues, keep it swinging, play the language and keep striving to perform at the highest level possible.

How would you describe the state of jazz today? It's dying, but we need to keep it alive. Especially, as one of America's only true art forms.

What are some of the essential requirements to keep jazz alive and growing? Education, awareness, communication.....jazz musicians need to care about other people outside their little incestuous network of jazz nerds. Get some other people's perspective and really listen to why they either like jazz or don't.

What is in the near future? I'm actively playing/touring with my band the Kelly Powers Project. I'm also excited to be part of the Women in Jazz Fest in March performing at the Zinc Bar.

If I weren't a jazz musician, I would be a: a doctor.