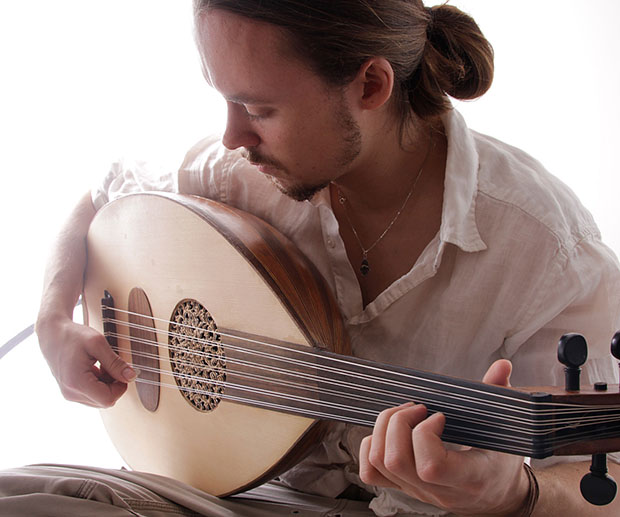 By JUSSI REIJONEN
July 16, 2012
Sign in to view read count
Meet Jussi Reijonen:
Born in Rovaniemi, a small town on the Arctic Circle in northern Finland, fretted/fretless guitarist and oudist Jussi Reijonen is truly the product of a world with few frontiers. Having grown up moving back and forth between Finnish Lapland, the Middle East, and East Africa, and currently living in Boston MA, USA, Jussi has spent his life soaking up the sounds, scents and shades of Nordic, Middle Eastern, African, and now American culture, which are all reflected in his music.

Along his path, Jussi has worked—as bandleader, sideman, composer or arranger—with numerous front row artists both in and outside his native Finland, and has performed extensively in Finland, Sweden, Latvia, Germany, France, Lebanon and the United States. After relocating to the US in 2008, he has had the honor of performing with the likes of renowned jazz drummer Jack DeJohnette, flamenco cantaor legend Pepe de Lucia, Spanish multi-Grammy Award-winning producer and flamenco guitarist Javier Limón, Palestinian oud/violin master Simon Shaheen, fretless guitar pioneer David Fiuczynski, Turkey's gypsy clarinet legend Hüsnü Şenlendirici, and Lebanese nay virtuoso and multi-instrumentalist Bassam Saba, to name a few.

Jussi is currently preparing to release his much-anticipated debut album, un with his quintet in September, 2012.

Your sound and approach to music:
I believe in two musical fundaments: honesty and presence. For me, for any art to communicate and connect, it has to have both, and neither can exist without the other.

My music is the result of a life lived in Northern Finland, the Middle East, Africa and now the USA; in my music, I attempt to combine traditions of American and Scandinavian jazz and the folk musics of the Middle East and Africa.

Your dream band:
Pretty much the quintet I play with now: myself, Utar Artun on piano, Bruno Räberg on acoustic bass, and Tareq Rantisi and Sergio Martinez on percussion. I hope to keep working with them for quite some time yet, expanding our sound.

Your favorite recording in your discography and why?
I have to say my upcoming album un, which will come out in September this year. It's been years and years in the making conceptually, so it's a major step for me to be able to finally release it. I think it is a true reflection of my life story and my personality as a musician at the moment. The recording session was wonderful as well—two days, tracking live with my band.

As a sideman, I'd vote for Gabriela Martina's EP, Empathie. Very fond memories of that session; she and her band are unbelievable.

The first Jazz album I bought was:
I think Bill Evans' You Must Believe in Spring.

What do you think is the most important thing you are contributing musically?
Tough one... honesty is what I strive for, so hopefully that will come across to listeners as well. Many of my tunes are quite long and based on moods and states of being, if you will, so I'm really trying to fight the hectic nature of modern life by trying to get people to stop, breathe, and meditate for awhile.

How would you describe the state of jazz today?
I think it's healthy. I really enjoy following the younger players and where they are taking music. No worries there!

What are some of the essential requirements to keep jazz alive and growing?
Openness, honesty and presence.

What is in the near future?
I'll be releasing my debut album as a leader, un, in September, 2012. The record will feature my original compositions in solo, duo, quartet, quintet and sextet configurations, and takes elements of Scandinavian and African-American jazz, Middle Eastern and African folk musics, and ties all that together with Indian-based rhythms. The band on the album is my quintet, meaning myself on fretless and fretted guitar and oud, Utar Artun on piano, Bruno Räberg on acoustic bass and Tareq Rantisi and Sergio Martinez on percussion.