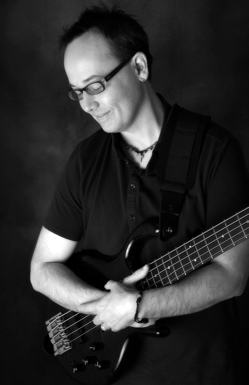 For more than a decade Joseph Patrick Moore has been touring, recording, and establishing himself as an artist with a unique voice and a diversity of talents. His skills as bassist; composer; arranger; producer; author; educator and founding partner of Blue Canoe Digital illustrate why he is a highly sought after musician. Moore's music and creative vision echo the spirits of Quincy Jones and Herbie Hancock, to name a few.

Teachers and/or influences?
I started taking bass lessons in Knoxville, TN in 1987 with The University of TN bass instructor Rusty Holloway. Rusty was directly responsible for my early development, motivation and exposing me to all styles of music. In 1991, I moved to Memphis and continued to study privately with Tim Goodwin and Scott Reed}}. Both Tim and Scott teach at the University of Memphis and are amazing players.

I knew I wanted to be a musician when...
That's hard to say as music has always been a part of my life every since I can remember. I grew up in the school band program, playing both saxophone and drums in the high school marching band. It wasn't until my later years in High School that I knew I could make a profession out of it. When I went to my first rock concert to see Iron Maiden, I was knocked out by the powerful sound of bass man Steve Harris and I believe that sealed the deal for me.

Your sound and approach to music:
My sound is always in flux and I'm continuously searching for my "voice." However, my approach is grounded in the fundamentals.

Your teaching approach:
While I'm not currently teaching privately, I did teach for many years. My philosophy and method centered around proper technique, learning your instrument, learning to read, learning to listen and developing good practice habits.

Your dream band:
I would love to put Herbie Hancock and Imogen Heap in a recording studio to see what would evolve with that collaboration. Using electronic sounds ensconced with a modern jazz tradition of jazz/new age improvisation would be an interesting recording date.

Road story: Your best or worst experience:
It's not a funny story, however I was playing a show and the lead singer had a heart attack on stage. Additionally it happened again with another band (keyboard player). Thankfully both recovered and all is well. To be standing beside someone when that happens is a bit painful to watch. It definitely left a mark on me to cherish every second that God gives us.

Favorite venue:
My three favorite clubs are The Rams Head (Maryland), Tipitina's (original- New Orleans), The Variety Playhouse (Atlanta). There are several others, but those are the ones that stand out for me.

Your favorite recording in your discography and why?
That's a very difficult question to answer. To be honest, I usually don't like many of the recording's I've made as a leader. I'm trying to always grow and push the envelope musically and otherwise. In the words of U2, "I Still Haven't Found What I'm Looking For."

All that to say, the recording that maybe best encompasses where I'm coming from now is "To Africa With Love." I'm not scared to take chances musically. Sometimes they work and sometimes they don't. Additionally, I like to incorporate jazz improvisation/arranging/composing with other styles of music.

As a sideman, I've had the honor and privilege to work with many talented artist's, producers and engineers. That's too difficult for me to say as I respect all of them for different reasons so I'll plead the fifth.

The first Jazz album I bought was:
Bitches Brew, by Miles Davis. Since I was a product of the MTV video age and started playing bass learning songs by The Police, Metallica and others, Bitches Brew was the perfect catalyst into the world of jazz. From this recording, I started tracing the roots back to Louis Armstrong and all points in-between. I listened and studied from the masters such as Duke Ellington, Bud Powell, Charlie Parker, Ray Brown and so many others. Bitches Brew was a pivotal turning point for me.

What do you think is the most important thing you are contributing musically?
That's an amazing question and one I don't think I can answer at this point. I just want to cherish the present moment and let the music talking heads and historians figure that out when I'm long gone. I'm just honestly trying to embrace every moment and situation that I'm in now. Playing live and in the studio, I'm trying to be the best that I can be and I want to be a vehicle to let God work through me. If I can put a smile on someone's face and touch the souls of others with my spirit and music, than I've accomplished what I came here for.

Did you know...
I started and founded Blue Canoe Records in 2003. To date, we have 27 artists and 35 releases. At first it was a platform to share my music, however that quickly evolved into working with my friends and other musical artist's that I was introduced with.

How would you describe the state of jazz today?
In my humble opinion, jazz is on the verge of burning out and the economic situation hasn't helped either. The world around us is changing so rapidly and the people who control the music are doing a very poor job at exposing, highlighting and presenting the music in a fresh and meaningful way (exception would be Esperanza Spalding).

Jazz only sells one percent of the total market share. Of that one percent, fifty percent of that is the classics (Miles, Kind of Blue, etc.). That leaves a very small window for new artists to be heard. The audience is there, however the media needs to engage the music fans in a more heartfelt, modern way. It is about presentation and ultimately, the music will speak for itself.

I should say that thanks to sites such as AllAboutJazz.com and others, it is making a real difference and I appreciate everything you guys are doing. It is people like Michael Ricci and the AAJ Staff who will lead the way in helping to keep jazz alive.

What are some of the essential requirements to keep jazz alive and growing?
It's about reaching the young people, making jazz hip and engaging without compromising the true essence of what the music is about. Social media is obviously changing and contributing to each of our lives. In order for jazz to continue to grow and push into the future, it is essential that the jazz community embrace all of the technological advancements, sounds, collaborations, fusing together cultures and communities, using computers with live improvisation etc. etc. or it could truly become "classical music."

With no disrespect, I humbly believe the jazz community, labels, magazines, Universities need to do a better job at education and reaching out to the young music fans. It needs to present the music to the public in a hip/modern way. The music will speak for itself! However, if the companies that control the music don't do a better job of promoting the music to the modern world, it's finished. Jazz is the best reality TV I've ever seen and people would embrace it if they only knew they liked it first.

What is in the near future?
Blue Canoe Records recently released an electro-jazz based EP titled XYZ Factor" It is a three-song EP (17 minutes of music) that incorporates electronica with contemporary jazz improvisation.

I have several projects that have been completed and they will be released in 2012 both as a producer and player. I look forward in sharing those with everyone.

If I weren't a jazz musician, I would be a:
I don't know? Music is the only thing I've ever really known or considered and truthfully I've never thought about doing anything else. If I had to think about it, I would say acting.