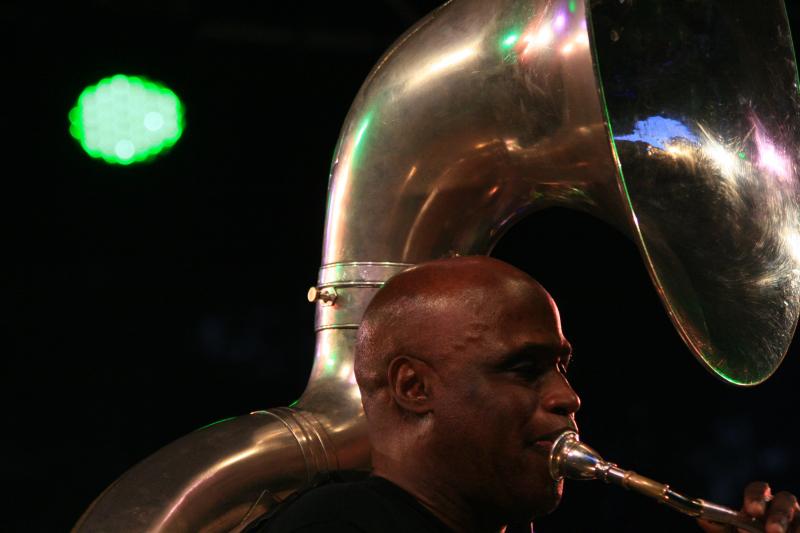 Whether performing with his large ensemble, his evocative Ebony Brass Quintet, a trio, duo, or as a soloist, his sheer musicality, deeply hewn emotion, and jubilant innovation are always at the core of Daley's most singular musical expression. Best known for playing the tuba, Daley also plays euphonium and valve trombone, and is recently enjoying a growing reputation as a visionary composer, bringing him worldwide acclaim.

Born in New York City's Harlem, Joseph Daley began his musical studies in elementary school and received high honors and recognitions throughout his school years, including the renowned High School of Music and Art, and was a member of the most prestigious ensembles in the New York City school system. During his high school years, he began performing on the Latin music scene alongside Rene McLean, Mongo Santamaria, Andy Gonzalez, Alex Blake, and many others.

A scholarship to the Manhattan School of Music resulted in a Bachelor's Degree in Performance and a Master's Degree in Music Education led to a career as an educator in the New York and New Jersey school systems from 1976 until his retirement in 2005. Heavily dedicated to the education of young people to the highest values in musical understanding and expression, Daley balanced his extensive educational commitments with recording and performing in the ensembles of some of the most provocative musicians on the contemporary jazz scene. In addition to those mentioned above, Daley has contributed heavily to groups led by artist like Muhal Richard Abrams, Makanda Ken McIntyre, Jason Hwang, and Dave Douglas. Joseph Daley was an original member of Howard Johnson's groundbreaking tuba ensemble, Gravity. Daley has also been a longtime collaborator with highly respected composer, ethnomusicologist, and master of non- Western instruments, Bill Cole, a relationship that is still intact.

Joseph Daley is also currently a member of the highly eclectic ensemble, Hazmat Modine, under the direction of visual artist Wade Schuman. It was Schuman's paintings that helped inspire the creation of Daley's Seven Deadly Sins project, which was developed at the McDowell Colony in 2001.

On top of his busy schedule, Daley's focus right now is on his next recording project, The Seven Virtues, which features a large string ensemble. He has also designed an extensive series of educational projects for the university level and will be embarking on a series of residencies and performance-based projects.

To sum up the purpose and commitment of Joseph Daley, the tuba player says, "If the music I compose provides one wit ha sense of beauty, inner peace, and instropection, then I am pleased."

I knew I wanted to be a musician when...
When I began to realize the power of sound.

Your favorite recording in your discography and why?
John Coltrane's A Love Supreme (Impulse, 1965). Coltrane draws the music on this project from the depths of his creative soul and it has a stimulating effect of one's spirituality.

CDs you are listening to now:
Marty Ehrlich, A Trumpet in the Morning (New World Records, 2013).

How would you describe the state of jazz today?
Jazz is recognized internationally as a the creative environment for many artists. It has assimilated musical concepts from the many diverse musical cultures of the world. This symbiotic relationship has broadens the appeal of the music while it simultaneously nourishes the growth.

What is in the near future?
I have recently released my string ensemble project, The Seven Heavenly Virtues (Jaro, 2011). It serves as a vehicle for 10 beautifully orchestrated original compositions. It is the follow up project to my masterwork The Seven Deadly Sins, which was written for an extended jazz ensemble of close to 30 musicians. I am presently organizing World Premier performances for the 2014-2015 concert season for both ensembles.

What's your greatest fear when you perform?
My greatest fear as a brass player is executing the very first few notes of a performance. Once that is accomplished I know that everything is going to be alright.

What song would you like played at your funeral?
If I am able to, I plan to write a few compositions for my funeral. If I am not able to, then any of the New Orleans 2nd line repertoire will be appropriate.

What is your favorite song to whistle or sing in the shower?
I love to sing the melodic tunes of composer Billy Strayhorn. "A Train" and "Lush Life" are two excellent examples. I find the interval relationships very contemplative.

By Day:
I was very fortunate to be professional music educator for over 30 years, I have retired formally but continue informally to work with anyone the makes a request. I found teaching very rewarding because you always receive more than you give.

If I weren't a jazz musician, I would be a:
A composer, educator, or a strong supporter and patron of the arts.