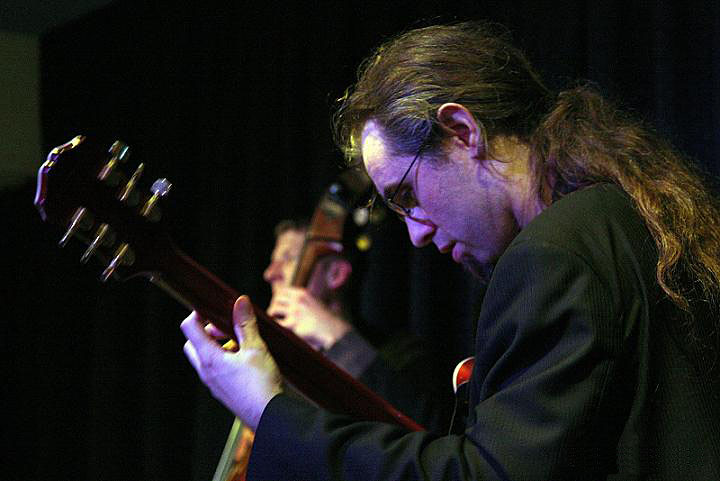 His intelligent style of playing is in perfect balance with the necessary emotion and energy that is needed when making music. Not only his playing but also his compositions leave a major imprint on the sound of Træben.

He has played and recorded with Michael Brecker, John Engels, Slide Hampton, Yvonne Smeets, Ferdinand Povel, John Abercrombie and many others.

Teachers and/or influences?
After some years of lessons in classical guitar, I started to take lessons from Jens Kokholm while studying mathematics at the University of Aarhus. Later, I realized that I wanted to learn jazz and, after moving to Copenhagen, began studying with Morten Kargaard and Bjarne Roupe. In 1998 I moved to The Hague, in The Netherlands, to start my study at the Royal Conservatory. While I was there I had the chance to study with Peter Nieuwerf, Wim Bronnenberg and Eef Albers.

Besides all my guitar teachers, I have always found that I learned a lot from all the people I had the chance to play with, speaking and playing with different bassists, pianists, drummers and singers have shaped and influenced my playing just as much—if not more—than my lessons.

A similar thing could be said about learning other styles than jazz. While I love the jazz tradition, I have also found a lot of inspiration in checking out for example African and Brazilian music or listening to a lot of pop and rock music.

I knew I wanted to be a musician when...
I realized that some of the people I was jamming with wanted to be musicians and thought they could; I figured, then, I could do so, too. Turns out that we all could.

Your sound and approach to music:
With my music and my band, Træben, we are exploring what we can do to make jazz music where the song as a whole has meaning. To me, a lot of jazz music I listen to is great, but the form as a whole is a bit chopped up, going from one solo to another, with the story in the whole song getting lost a bit. That does not have to be bad; a lot of my favorite records are like that, but we wanted to try something else.

Road story: Your best or worst experience:
Going to Tunisia to play at the Queens Day celebration. We were supposed to play at a party at the Embassy and ended up only playing the national anthem once, because of an accident back in the Netherlands that got everything cancelled.

Favorite venue:
There are a lot of nice places that I have had the pleasure of playing. From bigger festivals like North Sea, Copenhagen Jazz and Jazz in Duketown to small clubs run by people who love the music like Jazzzolder in Belgium, or Jazz at the Crow in Eindhoven. They are very different, but I have had more good experiences than bad, and I am very grateful for that!

Your favorite recording in your discography and why?
Træben , Push. Mainly because it is a band consisting of friends who are also people I've worked with a long time, so we were very happy with the recording, and it has been very well received.

Another very important aspect is that I wrote a lot of the music and it is the first time I got to do that for a record.

The first Jazz album I bought was:
A Charlie Parker compilation. At the time, I had no idea what they were doing since I came from Jimi Hendrix, Stevie Ray Vaughan and Pearl Jam, but at the same time I understood how Parker played blues and I wanted to figure the rest out.

What do you think is the most important thing you are contributing musically?
I don't know what I am contributing, I think that is more for other people to decide. I have recently become aware that I feel so much more inspired by seeing live music, so I hope to get more time to go see some concerts in the coming months or years!

CDs you are listening to now:
Andrés Thór, Mónókróm.

How would you describe the state of jazz today?
Jazz like all arts is struggling, but it seems to me that all arts were always struggling. I hope that in my creative career choice I will prove creative enough to also make a living. I have been so far.

What are some of the essential requirements to keep jazz alive and growing?
Getting the music out there and trying to keep the interest going. Keeping the music relevant by trying to write and perform in a way that is relevant today. Teaching is essential since, to me anyway, I can help students feel the fun of playing with other people and jazz is the style of music with the most room for communication.

What is in the near future?
With Træben, we are planning a tour in Scandinavia and, of course, we plan to keep playing concerts in the Netherlands, Belgium and Germany. We are also starting to prepare the next Træben CD.