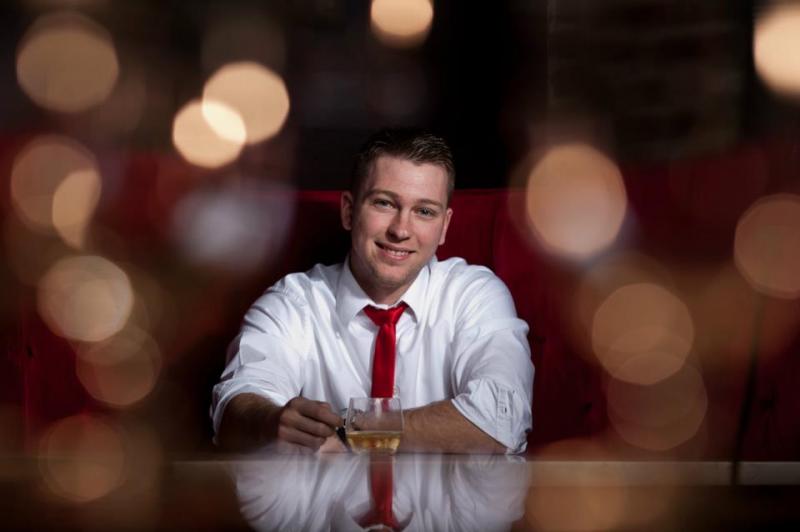 By JB BARETSKY
July 28, 2012
Sign in to view read count
Meet JB Baretsky:
At only 25-years-old, JB Baretsky is wise beyond his years. From packed out performances all over New York (including two dates at Lincoln Center) to write-ups in The Huffington Post, Pulse Magazine, JazzTimes, and more. JB is bringing a vintage sound, style, and culture to new audiences, young and old. He has gained a wide-range of respect from critics and listeners alike.

Instrument(s):
Vocalist. I also perform on piano and harmonica for some songs.

Teachers and/or influences?
Obviously I take a lot of my style from the movie Boogie Nights...Yeah, no... I draw from Sammy Davis Jr., Dean Martin, and of course, Frank Sinatra. They are, of course, the kings of the genre and the best stage performers in the history of Las Vegas, and New York Night Clubs.

I knew I wanted to be a musician when...
It sounds a little weird but I remember trying to sing to my mother's Tom Petty and The Heartbreakers tape. I kept thinking, if only I could sing like that. I said the same thing about Hootie and The Blowfish, Frank Sinatra, Dion and The Belmonts, and Rob Thomas. I was never told that I could sing though, so when the opportunity came to play an instrument, I decided on the trumpet, like my grandfather played. So, at a fairly young age I was just drawn to music.

Your sound and approach to music:
I would best describe my sound as raw, with a lot of passion, feeling, and hint of lemon. Truth is I have never had a singing lesson in my life, and I really just approach each song, and each note, as naturally as I feel it.

Your dream band:
I would love to play with a huge orchestra. Singing the songs with big horn sections and soft strings would really be a dream come true. Right now, I'm very pleased with my band: Bill Gerardi on drums, Tom Sheridan on guitar, Bob Pollio on bass, and myself on piano (depending on the song). If I had to add anything to that, maybe a soloist on the tenor sax?

Road story: Your best or worst experience:
One night, I told the crowd I was going to sing a song A Capella. I asked them if they all knew what A Capella meant. (It, of course means, to sing a song without any music, just vocals.) I proceeded to explain what A Capella meant; "To sing a song without any...clothes on." I then asked a large man in front if he wanted to join me. I got a pretty good laugh with that, which I expected. What i didn't expect was a girl from the back of the room to scream out, "I WILL!!!"

After the laughter, I asked the girl where she was going after the show. Her response was, "Wherever you're going baby!"

I, of course, did what any other performer would do at that point... I called for security. Ha ha.

Your favorite recording in your discography and why?
I love my rendition of "Mack the Knife," and my original, "Calling my Bluff." They both really mean a lot to me, especially "Calling my Bluff." It was the first song where I realized I can be a songwriter. As for "Mack the Knife," I really think that song is becoming my calling card out of all the standards I sing.

What do you think is the most important thing you are contributing musically?
I feel that I am bringing back the power of the "Lone Entertainer." In the days of the Rat Pack, there was no need for 50 back-up dancers, moving stage-sets, and fireworks. Are they nice? Yes. Are they necessary? I don't think so.

Did you know...
Although my last name is Baretsky, I am not Polish. My father is Ukrainian, and my mother is... drum roll... Italian. In fact, she's very Italian. Her maiden name is Pisano, which makes me even more like my idols Dean Martin and Sinatra.

(Side note: Just like Sinatra, I also have blue eyes. Although mine comes from my father's (non-pasta loving) blood)

CDs you are listening to now:
I'm pretty sure I have Sinatra's "Come Swing With Me" on vinyl. I hung it in my room for a very long time. Since then, I have tried to conserve money by buying greatest hit compilations.

How would you describe the state of jazz today?
I feel that Jazz is almost at the point where people feel they have to conceal their feelings toward it. It's almost not-okay to like Jazz. With the world's population being what it is, there's more than enough room, for not only Jazz music, but all music. Too many times are we told what is "cool" and what isn't, by society.

What are some of the essential requirements to keep jazz alive and growing?
Well, one, we need to have artists who believe in the music and the artists of the past, as much as a child believes in Santa Claus. (Still devastated about that little piece of info, by the way) We also need people who can embody the music of Jazz, almost a performance art. It's not just about music, its about the presentation of the music.

What is in the near future?
I am looking to finish my first album by the end of the Summer. (It takes Taylor Swift a year and a half to finish one and look what she turns out, so cut me some slack.) I have a show in New York City coming up on the 11th of August, at Somethin' Jazz Club. I am also going to be appearing at some big festivals this Fall (announcements to come). These are the kind of venues I've been waiting to play since I was at Lincoln Center a year ago, so I'm very excited.

What's your greatest fear when you perform?
The only real fear has nothing to do with the actual performance. It's a realization that hits me after I have finished or before I even begin. It's fears like "What if something happens and I cant do this for the rest of my life?!." I need to perform like I need to breathe. It's that simple. Whether it be illness, lack of opportunity, etc,. I cant let that fear affect me. This is something I've wanted since I was 5 years old. It's what makes me happy. And we are all here for way too short of a time to be anything less than happy.

What song would you like played at your funeral?
Well, there's a morale booster! I think, "One For My Baby, "And One More For The Road, " Once Upon a Time," or "I'll Be Seeing You." Those are some of my favorites.

What is your favorite song to whistle or sing in the shower?
"Everybody Loves Somebody" by Dean Martin. Every time I sing it, it makes me think of him ending his Variety Show, and singing it right to the viewers at home. I like to think that maybe I could do the same some day.

By Day:
Well, I still have bills to pay like any other American, so by day, I am an Assistant Store Manager for CVS/Pharmacy. By night, on the other hand, you better believe I'm fighting crime... ya know, but with music.

If I weren't a jazz musician, I would be a:
Honestly, I would really love to be a teacher; either Music, English or Theater. Teaching is a type of "performing" when you think about it. You stand in front of an audience and deliver a message. Only instead of a song or a joke, it's knowledge.