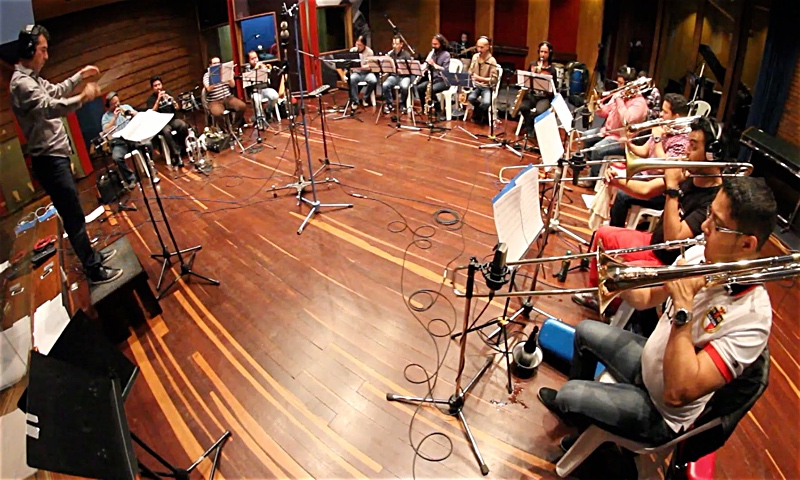 By JAVIER PEREZ SANDOVAL
August 21, 2016
Sign in to view read count
Meet Javier Perez Sandoval:
Javier Perez Sandoval's Carrera Quinta is a Colombian sextet established in 2006 by composers Javier and Francy Montalvo. The band blends contemporary jazz with traditional Colombian music from the Andean region, creating an unique, intense and powerful sound. After recording their debut album En Esencia in 2009, the group expanded to an eighteen-piece orchestra delivering their second album Carrera Quinta Big Band. The album features compositions awarded in 2013 by Bogotá´s department of Arts, Idartes, and one piece commissioned by Bogotá´s Jazz Festival, Jazz al Parque, in 2014. Carrera Quinta received composition, performance and research awards by the Colombian Cultural Department and Idartes. In 2010 they won the Hatoviejo-Cotrafa Music Festival competition (one of the most important performance competitions in Colombian traditional music) as well as the 2010 competition Festival de Nuevas Músicas Mestizas organized by Bogotá's Chamber of Commerce. In 2009, Francy Montalvo´s "En Esencia" won the Colombian Cultural Department traditional composition competition. The band has performed in the most important venues in Bogotá, Teatro Mayor Sala Estudio, Auditorio Fabio Lozano, among others. In 2011 the band was invited by Berklee College of Music to perform a concert series and give workshops about Colombian traditional music.

Teachers and/or influences?
At school, we studied at University of Louisville School of Music Jamey Aebersold Jazz Studies Program with Mike Tracy, Chris Fitzgerald, Craig Wagner, Ansyn Banks. But our all-time favorite teacher is the great John La Barbera. In Colombia, we studied with Dario Pérez, on of the most important pianist and composers in Colombian music history. Also Fabio Martinez, Magdalena Pérez, Kike Mendoza, Gabriel Rondon, were a very big influence on us by helping us to find our voice. Colombian Cyclists Nairo Quintana, Lucho Herrera and Esteban Chavez are our biggest influences and inspiration, also Ayrton Senna and Leo Messi.

I knew I wanted to be a musician when...
When I was eight years old I got a small guitar, it was more like a toy, no strings.. Just the guitar shape made of plastic.

Your sound and approach to music:
It's difficult to define our sound, but if we have to do it in a sentence I would say that our style is a blend of Colombian traditional music with a strong modern jazz influence. We have modal and modern harmonies and rhythms from the Andean region of Colombia. All those elements can be heard in our compositions and arrangements.

Road story: Your best or worst experience:
Our best experience was our big band album's release show. It was a 600 seat concert and we were really worried about tickets sales. But we sold it out!

Your favorite recording in your discography and why?
My favorite album is my band's new album Carrera Quinta Big Band. The album blends Colombian traditional music and contemporary jazz. Most of the tunes were composed while I was living in Louisville studying with John La Barbera at University of Louisville. In the recording we had the chance to work with some of the best musicians in Bogotá, Colombia. From the rehearsals to the editing, mixing, mastering, and finally the release show, the whole album making process was not easy but we enjoyed it.

The first Jazz album I bought was:
Miles Davis Kind of Blue

What is in the near future?
Playing, touring, and making new records.