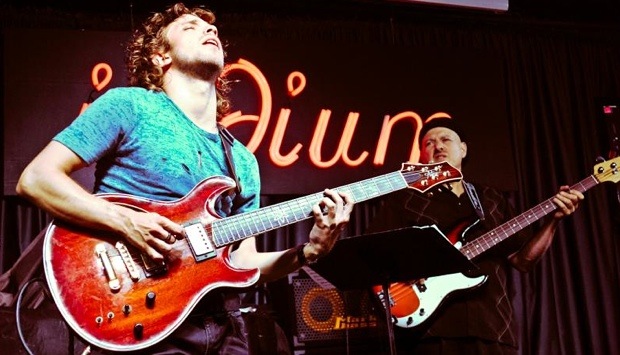 view slideshow
By JAKE HERTZOG
September 22, 2011
Sign in to view read count
Meet Jake Hertzog:
Jake Hertzog's accomplishments as a jazz musician mesh with his love for the rock idiom, creating almost an entirely new musical language. His new album, Evolution, co- produced by the great jazz bassist Harvie S, the original compositions (except for Jake's version of Bruce Springsteen's "Streets of Philadelphia") have been mastered to perfection—and is a recording destined to become a classic.

Past achievements include winning the Grand Prize in 2006 for the Montreux Jazz Guitar Competition in Switzerland. Jake holds title at 20 years old as the youngest ever prize winner in the competition's history. He was invited back in 2007 to showcase his original music at the Festival. Jake is an alum of the prestigious Berklee College of Music and recipient of several performance scholarships.

Under the alias Hey Jazz Guy, Jake is a monthly contributor to Guitar Player Magazine's "Lessons" section. He has been coined as the Jazz Ambassador to the non- jazz world. Guitar Player calls him ..."the blazing wunderkind"; The Boston Phoenix has declared him ..."the WOW! factor."

I knew I wanted to be a musician when...
Growing up, I insisted that every toy in the house was a guitar. I still do.

Your sound and approach to music:
My approach is to always try to be as creative as possible, and never hold back, both in what the music is, and what the guitar sounds like. I envision the guitar, bass and drums, as one instrument that can be made to sound like so many things. Jazz to me is all about searching for the "new," so I try to take that approach to playing music.

Your teaching approach:
I believe the goal of musical instruction is to help people find their own internal music. Give them the technical tools (theory, instrumental skills) they need and let them run with it. Guide them to find their own ideas in an authentic way.

Your dream band:
Herbie Hancock is someone I've always wanted to work with, and with that in mind, let's put Sting on bass and Vinnie Colaiuta on drums!

Road story: Your best or worst experience:
On a state fair arena show I did with a pop group, halfway through the set, the legs on the bass drum broke, collapsing the most of the drum set. In order to make it through the song, every band member ended up scrambling to hold up some part of the drum kit while continuing to play their instruments and sing backup vocals. It was the ultimate busted gear moment!

Favorite venue:
I love playing at the Iridium in New York. The sound is always great and it's a great room for an electric trio. My favorite of all would have to be the Montreux Jazz Festival. I've never had a better stage sound and the crew was so amazing!

Your favorite recording in your discography and why?
Definitely my new album Evolution, because I really feel like it captures the way the band sounds live. All the sound changes and vibe changes that are part of our live experience are reflected on that record.

The first Jazz album I bought was:
Pat Martino, Footprints

What do you think is the most important thing you are contributing musically?
I think my most important contribution would be drawing from the influences of the contemporary rock scene. I've had the privilege to play in many different rock bands and that has really had an impact on my jazz sound. I also love the way that the rock groups experiment with sounds and textures and I try to bring a little bit of that to my group.

Did you know...
I went to kindergarten in Switzerland when my parents lived there. My father was working as a physicist at CERN.

CDs you are listening to now:
U2, The Joshua Tree;
Arcade Fire, The Suburbs;
Pat Metheny, The Way Up;
Bill Frisell, Gone, Just Like A Train.

How would you describe the state of jazz today?
Very fragmented, but there is some really great music going on. I think the difference in jazz today is that there are so many sub-styles. That can be a good thing, though, because it breeds more cross-pollination between artists.

What are some of the essential requirements to keep jazz alive and growing?
The artists have to be allowed to do their thing and stay creative, but the business has to do its part to embrace developing talent and push young artists forward, in the same way they pushed young artists 30 years ago.

What is in the near future?
A European tour with my good friend and saxophonist Alex Mathias, and some UK dates with my band, as well as couple of live recordings. Can't wait!

If I weren't a jazz musician, I would be a:
Politician.