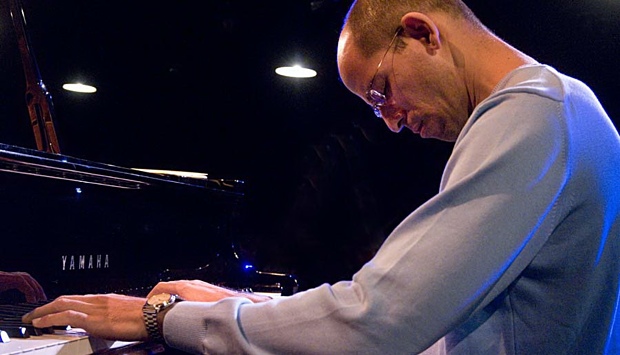 By EDWARD SIMON
June 21, 2011
Sign in to view read count
Meet Edward Simon:
The process by which Simon became an internationally regarded jazz musician began in the small coastal town of Cardon, Venezuela, where he grew up surrounded by the sounds of Latin and Caribbean music. Born in 1969, Simon credits his father, Hadsy, for developing his passion for music and supporting him and his two brothers, Marlon and Michael, to become professional musicians.

Upon arriving on the New York jazz scene in 1989, his reputation as a pensive, rhythmically astute, versatile player caught the ear of noted musicians Greg Osby, Jerry Gonzalez, Bobby Hutcherson, Herbie Mann, Kevin Eubanks and Paquito D'Rivera, all of who would later employ him. In 1989 Simon took the piano chair in Bobby Watson's influential group Horizon (1989-94), later moving to the Terence Blanchard Group (1994-2002).

Simon made his first recording as a leader in 1994 (Beauty Within, Audioquest), giving birth to the Edward Simon Trio—the same year he took third place in the Thelonious Monk International Jazz Piano Competition. Since then he has founded, established and served as musical director of several jazz ensembles such as: the Edward Simon Quartet, Ensemble Venezuela and Afinidad.

Today, the Edward Simon Trio has become an established voice with five recordings and recent performances at such well-known jazz venues as the Village Vanguard, Jazz Bakery and Casa del Jazz.

In 2010 Simon was named Guggenheim Fellow by the John Simon Guggenheim Memorial Foundation. He is currently a member of the San Francisco Jazz Collective, a prominent musician/composer jazz ensemble dedicated to creating new work and highlighting the music of historically significant jazz composers of the modern era. The Collective is comprised of "eight of the most in-demand (New York Times) artists performing today.

Teachers and/or influences?
Simon attended the Philadelphia Performing Arts School, graduating at 15, then received a music scholarship from the University of the Arts where he studied classical music with concert pianist Susan Starr. Later he transferred to the Manhattan School of Music where he studied jazz piano with Harold Danko.

I knew I wanted to be a musician when...
I was on stage performing with Nuestro Grupo, a dance band formed and lead by my brother Marlon (drummer/percussionist), completely exhilarated by the experience of connecting with the other musicians in the band and the dancers on the dance floor. I was about 10 years old at the time and living in my home town Punta Cardón, Venezuela. This experience had a tremendous impact on me, and on top of that I was getting paid! I've always derived tremendous pleasure from performing and remember making a clear decision that I wanted to be doing this for the rest of my life.

Your sound and approach to music:
The music of Latin America, with its infectious rhythms, is one of my greatest resources. it offers an ocean of possibilities. I revel in the hybrids resulting from the integration of jazz improvisation and various ethnic rhythms and Latin song forms.

I endeavor to develop a sound that strikes a balance between the structural clarity of classical music, the moment-to-moment interaction of jazz, and the richness, poetry and passion of Latin music. I generate the raw material for my compositions through a process of free extemporization. Using notation software, I carefully manipulate and craft them into a complete sound picture. I like music which does always sound like music but instead conjures up visual images in one's mind and tells a story. Aesthetically, I'm concerned with simplicity and economy. Striving to get to the essence of the message, I try to make every note count, just as every word counts in a good story. I think of music as a living being—something that is under constant transformation.

Your teaching approach:
I believe that the primary role of the teacher is to create and provide ways in which a student can remove his or her own stumbling blocks. We each create our own limitations, but we need a teacher to help us identify them and figure out how to move beyond them. A teacher can only point the way, but one must put the time in and walk the path.

Your dream band:
My ideal band is my current trio with John Patitucci and Brian Blade. I would love to work with jazz greats such as Pat Metheny, Jack DeJohnette and Charlie Haden.

Road story: Your best or worst experience:
This happened at a live performance in Italy while on tour with Afinidad (David Binney, Scott Colley, Adam Rogers and Antonio Sanchez). I was about to play the introduction to a lovely ballad ("Caballo Viejo") and was counting it off while at the same time moving from standing to sitting when I noticed there was no piano bench there! (I realized that I had pushed it back) I almost fell on my butt and accidentally played the ugliest cluster as I tried to grab on to the piano to keep myself from falling. We continued to play the tune, however I could not look at the other musicians faces during the rest of the song as I knew we're all about to lose it in uncontrolled laughter. It took incredible amounts of effort to make it through the tune without losing it!


One of my favorite venues to play is the Village Vanguard. The acoustic and vibe in that place are like none other. The audiences who attend this club is there for the music only and because they want to hear you explore and take chances, it is as though they are ready to go on a journey with you. Also, because of all the greats who have played there, you feel a sense of reverence that is not present in other venues.

Your favorite recording in your discography and why?
There are actually two that I would select: Edward Simon (Kokopelli, 1995) and La Bikina (Mythology, 1998) but if I had to select only one I guess that would be La Bikina because of the compositions and playing of everyone who participated. This recording has a complete sound from beginning to end. It contains some of my best work as composer, arranger and producer.

Compositions such as "The Process" and "Uncertainty" are among my best. The interaction between the musicians on this recording is special.

Listen to the inner dialogue in the rhythm section (Adam Cruz, Ben Street, Pernell Saturnino and myself), and the solos by Mark Turner (tenor) and David Binney (alto), who are among my all time favorites voices.

The first album I bought was:
Frankly, I don't remember which was the first record I bought, but my guess is that is some album by Oscar DeLeon.

What do you think is the most important thing you are contributing musically?
Space, a strong presence and a sense of appreciation for every note that is played..

Did you know...
I don't listen to music much (I enjoy silence much more).

What are some of the essential requirements to keep jazz alive and growing?
We need more support both from the public and private sectors. We need to create more ways to expose and educate audiences about the music. The more you know about something, the deeper your experience and enjoyment of it. There needs to be more jazz on radio and television, not just the internet.

What is in the near future?
Later this year I will be releasing a live record of my trio at the Jazz Standard featuring John Patitucci and Brian Blade. This fall I'll be touring in the US with the SFJAZZ Collective and in Europe with the Don Byron Quartet. By the end of the year I hope to perform with my trio in New York City.

If I weren't a jazz musician, I would be a:
A Buddhist monk.