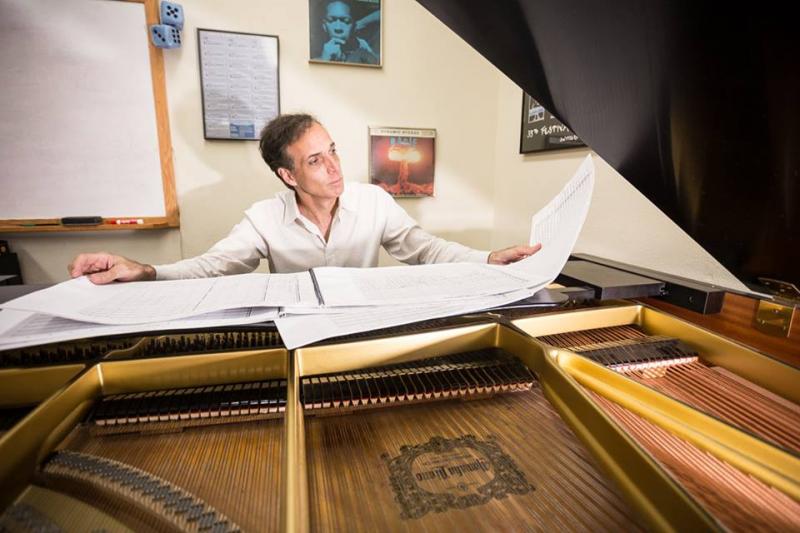 view slideshow
By DR. JACK COOPER
October 30, 2014
Sign in to view read count
Meet Dr. Jack Cooper:
Jack Cooper, has a wide range of experience as a performer, composer, and educator. His most recent CD recording of his compositions/arrangements, Mists: The Music of Charles Ives for Jazz Orchestra (Planet Arts Records, 2014) was released in August to critical acclaim in the Chicago Tribune and All About Jazz.

Dr. Cooper's television music composition credits include "the Jenny Jones Show," "American Restoration," Hollywood Xtra, SOCAN, and news broadcasts in the Washington, D.C. area. His critically acclaimed recording of his chamber music compositions is with Centaur Records, The Chamber Wind Music of Jack Cooper (Centaur 3027, 2010). Jack Cooper is musical director and founder of the Jazz Orchestra of the Delta. Their CD, Big Band Reflections of Cole Porter was released in June 2003 on the Summit Record Label.
Instrument(s):
Saxophones, clarinets, flutes, composition and arranging
Teachers and/or influences?
I first studied composition and arranging in Los Angeles with Tom Ranier. He was quite inspirational to have as a first teacher. I went to Cal State Los Angeles after that and was with Bob Curnow who had been a staff arranger and producer with the Stan Kenton Orchestra; very enlightening since my favorite writers at the time had been with the Kenton band. I also studied at that school with David Caffey, William Hill and Byoung Young Kim. During that time I was very fortunate to get some lessons with Gerald Wilson who also taught at CSULA and then during a summer with David Baker and Billy Taylor. I later studied with Manny Albam, Richard Lawn and Karl Korte.
I knew I wanted to be a musician when...
When I heard Artie Shaw playing the clarinet and Charlie Parker playing the alto sax on my parents 78 records (wow, that is old school!). I had been around my mom playing the organ and piano. She accompanied some world-class performers. I guess I did not really connect with music fully until after I started playing the clarinet when I was eleven. At that point when I heard Shaw and Parker playing jazz it motivated me a great deal more to really play the instruments.
Your sound and approach to music:
I have a hard time saying what my sound might be; it is such a cross-section of so many things. I mentioned Charlie Parker and Artie Shaw but I love Afro-Latin, classical, rock, and many other things that catch my ear. I draw from a number of sources; you hear this in my latest release with Planet Arts Records.
Your teaching approach:
Have the fundamentals down first. You can have the greatest and most inspired ideas but if you do not have the technique and skills to utilize and perform those ideas it is nothing.
Your dream band:
I basically had that band in the Planet Arts release but if I was to give a set of personnel then I would say the Vanguard Jazz Orchestra. They have the sound I want; they have the soloists.
Road story: Your best or worst experience:
The best experience I had was probably doing a T.V. show for MSNBC 9 years ago with full orchestra; I was in the woodwind section. The musical director was Harold Wheeler (MD for Dancing with the Stars) and the band was a very high level.


I have many bus/tour stories. Worst experience was being on tour over twenty years ago in Boston. The bus driver got the coach stuck under an overpass which created a huge traffic backup on the loop around the city. A big semi two truck had to be brought in to pull the bus out; we were late for a sound check and the day was mess after that.
Favorite venue:
Royal Albert Hall in London. The BBC has live performance down to a science. Everything is so well done for their broadcasts; they really know how to handle musical performance.
Your favorite recording in your discography and why?
My latest recording; Mists: Charles Ives for Jazz Orchestra. It is a culmination of many things I have done as a composer and arranger; the recording really shows off what I do.
The first Jazz album I bought was:
Charlie Parker compilation (double LP) of all the Savoy recordings.
What do you think is the most important thing you are contributing musically?
I hope my latest recording, Mists: Charles Ives for Jazz Orchestra points composers and arrangers in a direction to find new ideas that push them forward. I overtly tried to use a completely different set of source material that would push the boundaries of what we do as arrangers.
Did you know...
I wanted to become a professional baseball player when I was younger.
CDs you are listening to now:
Dirty Loops: Loopified (Verve, 2014)
Kenny Wheeler: The Long Waiting (Camjazz, 2012)
Freda Payne: Come Back To Me Love (Mack Avenue Records, 2014)
Desert Island picks:
Kenny Wheeler: Music for Large and Small Ensembles (ECM, 1990)
Miles Davis: Miles Ahead (Columbia, 1957)
Woody Herman: The Three Herds (Columbia, 1955)
Cannonball Adderley: Cannonball Takes Charge (Riverside, 1959)
Steps Ahead: Steps Ahead (Elektra-Warner Bros., 1983)
How would you describe the state of jazz today?
Transitional and undefined; how much jazz does the public actually listen to now? I have a very hard time when a record label persists on defining the music as smoother jazz when there is no jazz involved with that music. I have no problem with instrumental pop music but it is hard to understand how someone can define something as 'jazz' when it has little to do with improvisation or the core stylistic characteristics or history of the music.
What are some of the essential requirements to keep jazz alive and growing?
Three words: education, education and education. Unless there is a listening public that knows more about the music and can enjoy and appreciate the many aspects the music has to offer it will die.
What is in the near future?
There is a CD I wrote all the music for and recorded in Dallas in July of 2014 that will be released in December. The group was fantastic and will primarily feature drummer Mike Waldrop, a very talented guy.
What is your favorite song to whistle or sing in the shower?
"All The Things You Are"
By Day:
Director of Jazz Studies at the University of Memphis
If I weren't a jazz musician, I would be a:
Historian.