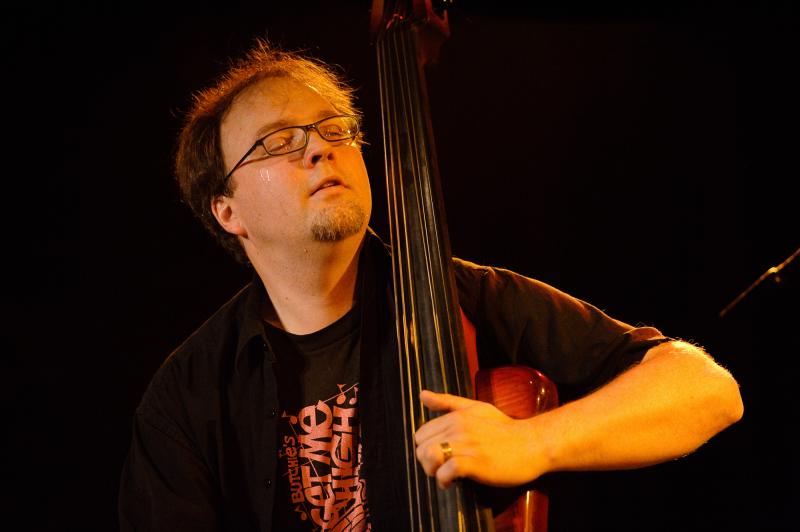 By DOUGLAS JOHNSON
May 23, 2012
Sign in to view read count
Meet Douglas Johnson:
Douglas Johnson is a bassist, composer and bandleader in Chicago, Illinois. He earned a bachelors' degree in music performance from Northwestern University, studying with Jeff Bradetich, and has been a Fellow for the Tanglewood Music Institute and Bach Aria Festival.

Doug served as Associate Principal Bass of the Honolulu Symphony for one season, and is currently active with the symphonic, chamber music, and progressive music scenes in Chicago, including playing as a substitute bassist with the Chicago Symphony, Access Contemporary Music, and the Chicago Composers Orchestra.

Doug has written music for the River North Chicago Dance Company, the Dutch National Ballet Project, and a 15-minute soundtrack for a Quay Brothers silent film scored for violin, viola, clarinet, horn, piano and percussion. Doug also completed and, as the soloist, premiered the middle movement of the Concerto for Double Bass in D minor, which is 1/3 completed. He has written string arrangements for a number of recording projects, most recently for the singer Maddy Meyer.

Doug is also the bandleader of the progressive improvisational group, Gunnelpumpers.

I knew I wanted to be a musician when...
I was a junior or senior in high school and realized there was nothing I'd rather do. And, maybe, the girls in the orchestra were always so damn cute.

Your sound and approach to music:
I tend to think of the double bass as a melodic instrument, and use the bow more often than not. I love orchestral playing: the combined power of 9-10 basses playing the same part, the sheer physicality of pulling a solid, full fundamental sound out of the instrument, the electricity of the music making.

In my own improvised music and with my group, Gunnelpumpers, I enjoy pioneering new sonic possibilities, primarily with my upright electric Clevinger bass. I have a large pedal board with which to help find that sound, at least for that moment.

Your dream band:
Gunnelpumpers is already my dream band.

Road story: Your best or worst experience:
I have freelanced as a bassist in and around Chicago for years, so it's only natural that strange things happen from time to time. In my book, this wedding takes the cake:

A pianist, violinist and I were hired to play at a wedding in a small synagogue on Chicago's north side. The couple to be wed was fond of The Beatles, Billy Joel and others, so our plan was for our trio to play some simple arrangements of these songs. We had rehearsed the previous day, decided the song order, and that Billy Joel's "Just the Way You Are" would be the processional at the beginning of the ceremony.

On the way to the synagogue for the wedding, it so happens that Chicago's Gay Pride Parade was taking place along the route I intended on using. After being turned back several times by police and fringy floats, I finally circumnavigated the affair and made it to the synagogue on time. Fortunately I had left home early. Not so for the pianist.

Minutes before the ceremony, the violinist and I are wondering where the pianist is. Because, after all, "Just the Way You Are" without piano was unthinkable. We keep thinking the pianist would magically appear to save the day, but, alas, he does not. We have to go to Plan B.

Of course, Plan B was not thought out beforehand. The violinist and I look at each other moments before the processional and I, for inexplicable reasons, whisper-blurted "Eight Days a Week." And, I must say, it was a very enthusiastic performance. I even slapped the sides of my bass where the hand clapping occurs in the recording.

Now, wedding processionals are usually rather solemn affairs. Not this time. Grandma and Grandpa were laughing down the aisles, the congregation started chuckling, and throughout the wedding, the nervous soon-to-be newlyweds kept giggling. In fact, giggling kept happening everywhere during the entire wedding: the rabbi, the parents, others in attendance. It turned out to be a rather buoyant affair. Afterwards, the father of the bride said he enjoyed our musical choices, and then started laughing.

If anything, I would like to think that couple will have a wonderfully happy marriage. If any sort of argument breaks out, just one of them has to start humming "Eight Days a Week" and the laughter will surely begin.

What do you think is the most important thing you are contributing musically?
I feel I'm expanding the possibilities of the upright bass through use of the bow and effects.

I'm also hoping to complete my concerto for double bass and orchestra at some point. One movement has been written, orchestrated and premiered already, but two more movements are waiting for me to find the time to write it. The goal with this piece is to write music that is great to listen to while pushing the limits of what the instrument can do, this time without effects, of course.

Did you know...
The connections between pitch, tempo and color fascinate me. It's all about octaves, and being a bassist, it's obvious that octaves resonate with each other. The pitch that most musicians tune to is an A natural tuned to 440 Hertz, generally referred to as "A-440," which means the sound wave has 440 cycles per second. Doubling this pitch's frequency creates an A natural that's exactly one octave higher (880 Hz), and halving it provides an A that's one octave lower (220 Hz).

It's really easy to keep halving a frequency to find lower and lower octaves. Eight octaves below A-440 is a frequency well below the human threshold of hearing. What's interesting, however, is that suddenly one can derive a tempo. 103.125 beats per minute (BPM) is an "octave" of A-440! We only see about one octave of colors, from around 375-750 terahertz (hundreds of trillions of Hertz). So one can double a pitch's frequency until it falls into this range of frequencies, and can derive a one-to-one relationship between a pitch and a color.

This might be kind of a stretch, since sound waves differ from light waves (which are mysteriously also particles), but is still pretty cool. I wrote a little computer program, Octavo, a couple of years ago that could calculate these tempos and colors. You can see screenshots from the program at this blog.

What is in the near future?
I'll be releasing Gunnelpumpers' third CD, Tritonium, in June, 2012. The plan is to release the group's 19-song epic, Montana Fix, in December, 2012.

I have begun work on a second solo CD consisting primarily of multi-tracked basses and nice melodies.

And of course, the bass concerto that needs finishing.