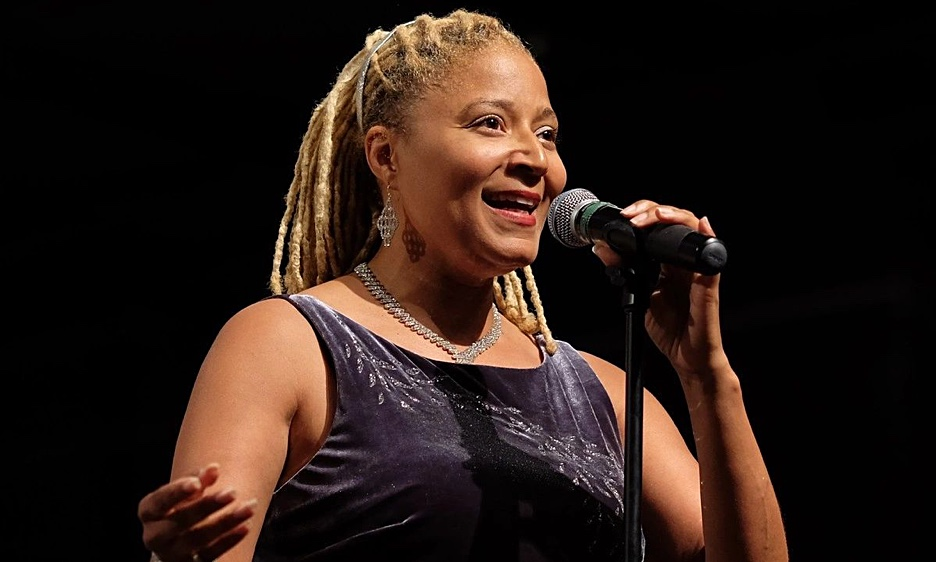 By DONNA SINGER
June 6, 2019
Sign in to view read count
About Donna Singer

Raised in the lush Catskills, Donna Singer graduated from the New York Academy of Theatrical Arts, then studied at The Juilliard School. Her far reaching career includes European concerts in Paris, Switzerland, Ireland, Italy and Wales. She has performed at the Metropolitan Opera Guild Recital Hall in Lincoln Center, Central Park's Naumburg Bandshell and The Kravis Center for the Performing Arts in West Palm Beach, where she now resides. She has played countless U.S. cities and the Nebraska International Jazz Festival, Bethany College Jazz Festival in Kansas and the Saratoga Arts Festival in New York.

A popular guest soloist in the U.S. and abroad, Singer performs often with the 18-piece Harmony Jazz Orchestra, the 80-member Gold Coast Concert Band and her own jazz quartet. She was lead vocalist in the Swing Shift Orchestra for 15 years.

No stranger to radio, her six recordings have ranked high on the CMJ jazz charts and enjoyed international airplay in North America, South America, Europe, Australia, and Africa. From 1998-2004 she hosted the weekly gospel show, Down by the River on WJFF 90.5 FM radio in Sullivan County, NY.

She is a member of The National Guild of Piano Teachers: Teachers Division of American College of Musicians.

Sharon Cleaveau of the New York City Opera Company taught me opera, which turned out to be a perfect foundation for my jazz singing. She opened up a new genre for me and gave me a stronger sense of who I was and what I could become. She loved to smile and laugh, while very much getting on me when homework was lacking. I absolutely adored her. She died of cancer 2012 and I was honored to sing at her funeral.

I grew up in Upstate New York where me and my siblings were introduced to the world of jazz. We were raised in a family of jazz enthusiasts who listened to the music of great artists like Nancy Wilson "Guess Who I Saw Today," Billy Strayhorn, "Take the A Train" with Duke Ellington, Sammy Davis Jr, "Hey There," and Count Basie "April in Paris." The bug hit me early on. I was humming before I could talk, and my father told me I was singing full songs at age five. My twin sister Dawn and I were in a local gong show and took first place as a song and dance duo to "Rockin' Robin." That routine quickly became the highlight of every family event until forever...

My sound and voice placement are important to me. While growing up I sang at the back of my throat. I learned about vowel placement and consonant reinforcement, which have become second nature. My approach to music is strong and consistent. Using the proper tools and my body, I have grown into a smart singer—meaning I'm still concerned about pitch in a song, but more about body placement. When the body is right the voice usually follows.

Your teaching approach to music

Dr. Donna's School of Song is my academy. I taught piano and voice and we also had a violin and guitar instructor. We had recitals twice a year and absolutely taught with a fun flare to children and adults. If it ain't fun, then what's the point? We learn our warm-ups and technique, not just standing correctly, but being correct at all times. That's the hardest part. Consistency. Training the body and the brain. Wow, no easy task.

In teaching beginner piano, my approach involves scales, scales, and more scales, contrary motion, parallel motion, flying over that keyboard faster and faster and then, bam, as slow as possible. I spend more time on warm ups and then the song second. Then there's theory. Make it fun and energetic. Why bother if you are bored? Why bother if they are bored. I'm serious, one mother said too bad, they are taking piano lessons and I said too bad I'm not your teacher. Simple as that. The piano is a gift and I taught the kids who understood that.

I love an 18-piece jazz orchestra. I love singing with a big band. Don't get me wrong, a trio or quartet is fine, but I sing in two 90 piece symphonic and concert bands and the power is overwhelming and fantastic. Knowing that the stage is commanded by you and yet not is humbling. They are following me, but in reality, I follow them. An 18-piece orchestra is flying high. Each section is so very important and we all are in it together in the same place, space and time.

My ideal quartet would feature a jazz trombonist. I work with William Fleck of New York, and he would be the bandleader. His improvisational skills are not just correct, but fun to listen to. You never know what melodic tones he's going to come up with next. It keeps them wanting more. Writing about my album Feeling the Jazz for BVS Reviews, Bruce E. Von Stiers praised Fleck's playing on a Gershwin tune:" Then there is a terrific, smile effecting rendition of the Gershwin tune, "S'Wonderful." There is an awesome

The next ideal member is Herbie Hancock on piano. Of course, his album The Piano is one of my favorites. Sheila E would be on drums (I was an actress/extra in her movie Krush Groove.) I stood next to Prince and was captivated by her electric smile. The bassist would be Doug Richards of Erskine Hawkins fame. "Tuxedo Junction" is one of my all-time favorite songs.

The Doug Richardson Trio and I worked together for seven years, and my husband (pianist/composer Roy Singer from Kansas) joined us for eight more. Doug had Stage 4 liver cancer, and when we were at the Nebraska International Jazz Festival, he was in so much pain that we all were concerned because he wanted to do this performance so badly, I knew he might not make it. My tears were silent. Not only did he go forward, his solos were hit perfectly. Why is this my best? He was the best, as a friend and as a musician. Get up and do the job.

Bill and I were performing in Switzerland and one of our side shows was a performance at a nursing home. Bill and I started circling the room to "When the Saints go Marching In" and the residents started going around with us, some in wheelchairs, some with canes, some with a cookie, and most important, all with smiles. They loved the music and the fun and having a trombone following the pack. Isn't that the joy? Most did not know English, but all felt the power of the music.

In Italy, we all sat down for dinner and were treated to a beautiful green salad that was hand-picked from the adjoining field. I put a piece of lettuce in my mouth and it was horrible, I said "what is this?" The chef told us it was grass and tossed it away. Later, touring in France, we found we were just moments away from the Tour de France. That was thrilling.

In NYC, Bar Thalia in Symphony Space. On Monday nights Mr. D'Ambrose Boyd has a singer's open mic. There is always a great, warm crowd and most definitely always great jazz. Singers and their songs were treated with respect.

In Upstate New York, The Center for Discovery, which is Designated as a Center of Excellence in New York State, they have become a magnet institution where individuals from around the region and world travel to receive highly advanced care and access to groundbreaking research for a myriad of complex conditions. They offer residential, medical, clinical, and special education programs to over 1,200 children, adults and families annually. For the past six years I have performed concerts there. The crowds are larger and larger and the fun gets bigger and better. The Center for Discovery is special and I'll perform there November 13, 2019 at 8:00 p.m. That same weekend I'm performing at Carnegie Hall on November 17.

Feeling the Jazz (2018) My favorite song from that album is "Have You Ever Had the Feeling," written by Karen Macklin, my sister in law. Karen and Savani (her daughter) plays violin on the track.

You see, I love Christmas! I have a huge tree, with lots of decorations, different flavored candy canes, cookies and, wait for it, my many black angels. I collect them and some I keep out all year round.

I contribute my professionalism and having a ball myself. With my audience, this is really important. I'm a little bit of a comedienne on stage. My favorite class at the New York Academy of Theatrical Arts was stand-up comedy, so I have to admit a smile breaks in here and there all the time.

Roy and I each earned a master's degree in theology from the Newburgh Bible Institute, Newburgh New York.

The first jazz album I bought was

Boy Meets Girl, studio album by Carmen McRae and Sammy Davis Jr. "They Didn't Believe Me" was my favorite song from that recording.

I'm listening to American gospel musician Alvin Martin Slaughter. I performed in two concerts with Alvin and he holds a special place in my heart. His Revive Us, Again! album rocks, the title song is gold.

I'm also enjoying Legion Of Peace: Songs Inspired by Nobel Laureates. It was recorded by Lori Henriques Quintet featuring Joey Alexander. The CD was sent to us by our good friend and producer Kabir Sehgal.

Sehgal served as a producer of American Dreamers: Voices of Hope, Music of Freedom by the John Daversa Big Band, it won three Grammy Awards: Best Large Jazz Ensemble Album; Best Arrangement, Instrumental or A Capella; and Best Improvised Jazz Solo. My favorite song/track is "Don't Fence Me In.""

I'm also listening to a Freddy Cole CD titled My Mood is You. It was Grammy nominated for Best Jazz Vocal Album. That CD was given to me as a gift from the producer, Todd Barkan. His wife Ilene Glick and my husband Roy are friends from the early seventies. Todd is co-owner of the exciting new jazz club Keystone Korner in Baltimore. My favorite song on that album is Temptation.