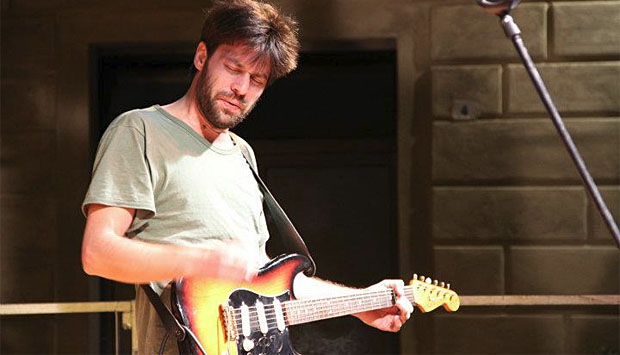 view slideshow
By DIEGO PERUGINI
November 19, 2011
Sign in to view read count
Meet Diego Perugini:
Diego was born in Sarteano, Siena, Italy. A sideman to many important Italian artists, now he has decided to make his own music and... here we are.

Teachers and/or influences?
I teach in 3 schools in tuscany. The most important artists that changed my life are: Dominic Miller, Pat Metheny, Donald Fagen, Bobby McFerrin, Bireli Lagrene

I knew I wanted to be a musician when...
...I took up a guitar and I heard, for the first time, the Kenny Kirkland solo on Stings "Bring on the Night."

Your sound and approach to music:
I like to improvise—blues, rock, funk, soul. It makes no difference; the most important thing is the interplay. The focus is to be the first listener of what I'm playing.

Your teaching approach:
I try to teach both theory and practice, never forgetting that music must be joy. My first question when a new student come to me is: "What is your favorite song?" Satisfaction is the driving force for application.

Road story: Your best or worst experience:
Too many stories to tell, but one among the many:

I was 17, and my older friends/musicians bring me to a gig two-to-three hours from my home. We started to play and our audience was just two women. It was a pub, and after one hour of playing (we didn't care about the low number of people, we even played with high energy), the two women thanked us for the good music and they went away.

The problem was that we were enjoying ourselves so much that we didn't stop. The landlord tried to stop us but it was impossible; he was so angry that he didn't pay us the right wage, but we were happy for the performance.

Your favorite recording in your discography and why?
"Boh blues" ("Dunno blues" in English); it's the first track of my album Acoustic Fusion, the first composition and the first recorded. In some sense all my work began from this song.

What do you think is the most important thing you are contributing musically?
My basic goal is to make true and genuine music. I try to move freely without stupid mental patterns that keep down the fantasy. The music is not just swing, and you can play jazz without a double bass!. Down with jazz extremists!

Did you know...
When I was a little boy I had a cassette by Extreme. I loved this band, and I played this cassette so many times that the titles became illegible—I turned it too many times in the player.

CDs you are listening to now:
Manu Katché, Neighbourhood;
The Roy Hargrove 4et, Nothing Serious;
Radiohead, In Rainbows; Sting, The Soul Cages; Bobby McFerrin, Beyond Words.

Desert Island picks:
The Beatles, The Beatles (White Album);
Sting, Bring on the Night; Pat Metheny, The Road to You; Tears for Fears, Elemental; Wes Montgomery, The Incredible Jazz Guitar.

How would you describe the state of jazz today?
In Italy, it is becoming a "matter of academic interest." I don't like the gap growing between people and musicians. The Duke Ellington Orchestra was a dancing orchestra.

What are some of the essential requirements to keep jazz alive and growing?
We must open our mind, and we have to listen contemporary music without prejudice. Or do we still think that Judas Priest put satanic messages into their music?

What is in the near future?
I'll begin to rehearse my show in the coming days, and will be an hard work because my band and I have to rearrange the entire album for six musicians.

If I weren't a jazz musician, I would be a:
A mathematician.