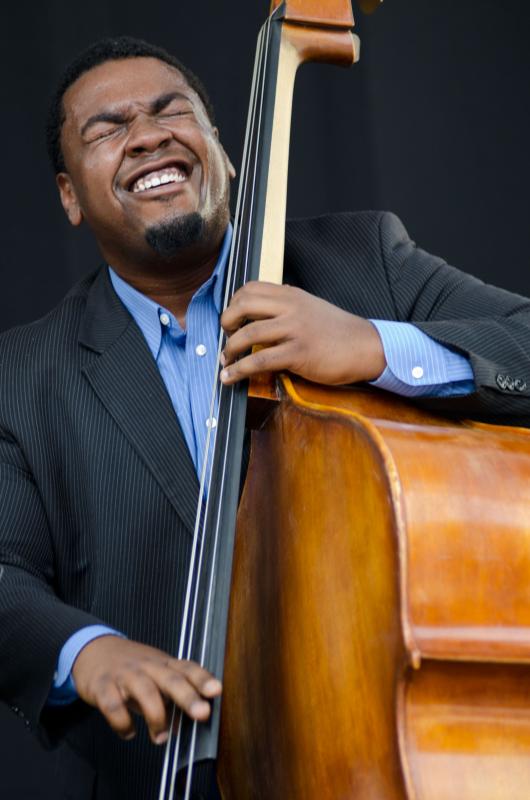 On Dezron Douglas: Live at Smalls, the bass prodigy is presented with a band of his peers: the highly original Stacy Dillard, the fiery Josh Evans, pianist David Bryant and the veteran drummer Willie Jones III.

Hailing from Hartford, CT, Douglas is a product of the Jackie McLean institute. Quickly establishing himself as a dominant voice on the jazz scene of New York City, Dezron began to work with such giants as Louis Hayes, Pharoah Sanders, Lewis Nash and Kevin Mahogany.

My biggest musical influence is my Father Minister Alton Douglas. He was the first person to put an instrument in my hands. I was also highly influenced by my Great Uncle Walter Bolden. He was a prolific drummer and composer from Hartford, CT that became one of the core members of second generation of bebop in the late '50s. Jackie McLean entered my life at the perfect time. I was 18 and I really didn't know what I wanted to do after high school. Jackie encouraged me to leave my fulltime job and enroll in his program at The Hartt School and, from that moment on, he was always in my ear. I studied bass privately with Dave Santoro during my middle school and high school years and I began and still continue to be a student of Nat Reeves since my freshman year in college.

The first time I saw my dad's band play. The Faith Harmonizers of Hartford, CT were a popular gospel quartet on the east coast in the '80s and '90s. My pop was a singer in the band. He had a great rapport with the bassist. I loved the way the bass captured the feel of the church. I remember being in church with my mother, Alicia Strong, when I was five or six and listening and locking into what the bassist was doing during "Praise and Worship" service. That was the first moment I fell in love with music.

Music is a spiritual connection between the instrumentalist and the Creator. All those pretty notes and great sounds don't just happen overnight or with lots of practice. Faith is my rock in this music. I practice so that I can let go and let the music (The Creator) take over me and allow me to communicate with whomever I am onstage with in a highly intense conversation.

If I could be a sideman in Jackie McLean's quartet in the '60s that would be my dream gig. To play with JMac, Billy Higgins or Art Taylor, and either Mal Waldron, Gil Coggins or Walter Davis....man, that's music happening. If I could lead a dream band it would be a septet ( I love horns ) with JMac, Dexter Gordon, Booker Little, Curtis Fuller, McCoy Tyner and Arthur Taylor. That's the band that I am feeling at this exact moment. Ask me tomorrow and it might be different cats. I'm still very much in a love affair with hard bop and free-thinking music from the '60s. That was a time when music was really moving forward on so many levels.

I was on the road in Russia with Cyrus Chestnut and Neal Smith. We were in Moscow at the time and I had to exchange some money. It was in the dead of January in what seemed to me to be a Frozen Tundra. I'm from Hartford, CT and I had never felt cold like that until that point. I walked to the exchange place, which looked like a fortress. Inside was one giant staircase with a Guard sitting behind it. He directed me up the staircase, which to my surprise was covered in ice. Inside? Yes!

I made it up the stairs and changed my money, but completely forgot about the wet staircase. Let's just say I tumbled and slipped all the way down what had to be at least 22 stairs (concrete and ice). I had a serious cut on my leg and my ankle was jacked up. The eerie part of it all was the Guard who was behind the staircase watched me fall all the way down on his monitor, he then chuckled when I landed, and as I walked by him on my way out he said absolutely nothing. Later that day we checked out of the hotel and Nutman treated us all to a box of chicken from KFC, which was actually MFC (Moscow Fried Chicken) for our three-hour drive to Tver. Let's just say them couple pieces of chicken I ate came at the right time.

I just recently played The Bimhuis in Amsterdam. Wow is all I can say. There is really nothing fancy about the place, but it is by far one of the best experiences onstage and even better response from the audience. My favorite spot in NY is a tie between Smalls in the West Village and Dizzy's in Columbus Circle. Both stages are Premiere yet they are sooooo different.

I actually have three current favorites. At some point all the records I own were my favorites. Right now I am digging on Jackie McLean MAC Attack Live, with Hotep Galeta, Nat Reeves, and Carl Allen. Second is Pharoah Sanders, Journey to The One, with John Hicks, Ray Drummond, Idris Muhammad and Eddie Henderson. Third is George Coleman, Amsterdam After Dark, with Cedar Walton, Sam Jones, and Billy Higgins. I am a fan of any recording that has Ray Brown, Sam Jones, Ron Carter, Charles Mingus or Doug Watkins on bass.

The first album that was given to me was Arthur Taylor Mr AT and Taylor's Wailers Wailing at The Vanguard, then my High School band director Scott Porter gave me Christian McBride's Gettin to It as a graduation gift. The first record I purchased myself was a compilation disc of Mingus called The Essential Mingus; from that album alone I went on to purchase Mingus Ah Um, Mingus in Wonderland, Changes .One and Two, and Blues and Roots/

Life. I feel like it's my duty to make everyone around me feel like they can play whatever they want to play and its accepted. That's life. Within the contexts of musical format, styles, and idea, sometimes as musicians we get caught up in individuality to the point that we feel we are creating something new. New is a word that means "you." In that case nothing is new; it's all been done before. You can't reinvent the wheel, but what you can do is go on a journey to the unknown with likeminded individuals. That's what I try to do every time I'm on the bandstand.

I am a diehard sports fan. I am an NFL fanatic and a superior NY Giants fan, and I have been since I was four years old. I am a huge Knicks fan as well. The Yankees are the newest additions to my sports family, since I began watching them play in 1990 when they stunk. I'm enamored with everything about sports. The concept of team and having one goal to which everyone benefits from. I played at Dizzy's with Willie Jones during the NFC championship game between NYG and San Fran last year, and during my opening solo to "NOMMO," we were doing a Max Roach tribute, I played the theme song to Monday Night Football, and what happens? Jeremy Pelt comes up to me and says "Giants got the ball back and they are about to kick a FG to win the game." The joy that appeared on my face and throughout my body was magical. I pulled my strings so hard and kicked the song off with a bang.

'Well.....I feel like it's even more alive than the "Haters" suggest it to be. There has not been a good representation of this music from my generation. There is a pile of great players and serious composers, but no one has yet made me feel like saying "I need to follow this cat." Maybe I am stuck in a more traditional manner, but it has nothing to do with progress. I feel like musicians today are so far behind the musicians of yesterday in the sense of respect for one's self and this music. It all comes down to parenting. I gravitate to the masters—my elders. They have more to teach us than anybody right now. I think my generation has lost a lot of respect for Elders. This may be due to technology or history, but ultimately parenting.

The media needs to get involved much more than they are now. All About Jazz is at the forefront of Jazz Media. We need much more. People watch TV and are on the internet more than they were 10 years ago. I want to see jazz TV shows back on cable. Live music being played for theme songs and what not. Bring back the studio orchestras. It will change things once again.

Well I hope to record some more of my music and continue to work with Ravi Coltrane, Cyrus Chestnut, Louis Hayes, Abraham Burton and any musician who feels I can bring something positive to their music.

I don't like to think about death, but if I had to pick one it would be "That's My Son (Hangin on the Cross)," a traditional gospel song I sing when I am with my father and my brothers.