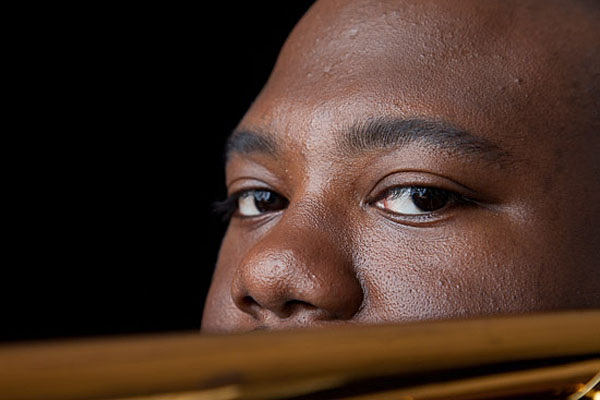 Trombonist/composer/arranger David White is a highly versatile musician who is building a strong reputation in the New York jazz scene. Since arriving in New York in 1999, he has performed frequently throughout the area and has shared the stage with such luminaries as Jon Faddis, Slide Hampton, James Weidman, Frank Lowe, Todd Coolman, Junior Mance and Valery Ponomarev.

Teachers and/or influences? I'm an instrumentalist, but I've been influenced more by vocal music than anything else. I'm inspired by vocalists such as Shirley Horn, Al Green, Prince, Shirley Caesar, Roberta Flack, Mary J. Blige, Erykah Badu and Marvin Gaye. When I listen to someone like Al Green, I picture myself playing and hearing that sound coming out of my horn. I want to have that type of expression in my music.

I knew I wanted to be a musician when... I remember the exact moment: It was a Saturday morning. I was sixteen years old. I was in the music section of the Buffalo Public Library Downtown Branch. I was holding a book that had a brown cover and a picture of a trumpet on it. I was talking to my friend Eric Biondo about applying to colleges. Then, in a moment of clarity, I realized that I wanted to devote my life to music. It was like meeting the love of your life for the first time and realizing that you never wanted to be apart from them ever again because you can't possibly imagine a future without them in it. That's how I feel about music.

Your sound and approach to music: As a trombonist, I want my sound to be a reflection of the deepest and truest part of me. I strive to have the purest sound possible. Then I take that sound and imbue it with all the feeling gained from my experiences as a person. I use this to energize my sound. I want to set each note on fire.

As a composer, I strive to create music that is nurturing and feeds your spirit. When you listen to my music I want you to feel as though you're having an honest conversation with a close friend. I want your life to be enriched by the experience.

Your teaching approach: I'm very hard on students especially in regard to using proper technique. I'm a stickler for good posture and breath support. I always use a metronome during lessons. If you make a mistake you have to do it again.

And again. And once more to prove that playing it correctly wasn't a fluke. It's not to be mean; it's just that I feel that sloppiness cannot be turned on and off. If you're sloppy in your lesson, you'll be sloppy on stage. You have to have control over your instrument in order to fully express what's in your heart. This is the approach Jim Pugh used in my trombone lessons at Purchase College and I've found it effective to emulate him.

My dream band is my own, the David White Jazz Orchestra. I love that band. It's the culmination of life's work as a musician and the experiences I've had in creating and developing it have helped me to grow as a person more than I could have ever imagined.

Historically speaking, I would love to have played in Duke Ellington's band. Aside from the amazing music, there are a lot of questions I would like to ask Duke about life and making your way in the world.

My favorite venue is Vanderveer Park United Methodist Church in Brooklyn, NY. I've played three concerts there for their annual jazz night. Although I'm not a member of the congregation they treated me very warmly. Of all the audiences I've played for, they are among the most appreciative and attentive.

The first Jazz album I bought was: Miles Davis, Doo Bop. When I was 12 my mother bought me a Charlie Parker CD for Christmas. Prior to that, I had not listened to much jazz at all. A few days later, I went into Doris Records in Buffalo, NY and I asked them if they had any other jazz records. They said, "we have two," and they showed me a Dave Valentin tape and a Miles Davis tape. I chose the Miles Davis. There was a picture of Miles playing a red trumpet on the cover and I think something about that appealed to my 12 year-old mind.

What do you think is the most important thing you are contributing musically? My music is autobiographical and very personal. Even though I don't use lyrics, I hope that people can relate to the feelings I'm expressing. When someone listens to my music I want them to feel as though they're not alone in the world.

Supreme Beings of Leisure, 11i (Rykodisc);

How would you describe the state of jazz today? I hear a lot of people who have something to say with their music. I want to participate in that conversation. This is an exciting time to be a musician.

What are some of the essential requirements to keep jazz alive and growing? I feel it's essential to embrace all of the diverse musical influences that are coming into the music today. The most interesting music comes from the interaction and melding of different musical traditions. As a music that embraces individuality, jazz is uniquely capable of absorbing diversity and using it to great effect. We need to encourage and celebrate this in our music.

What is in the near future? I'm working on producing a studio recording of my band, the David white Jazz Orchestra. We're going to record nine of my original compositions. The title of the album is Flashpoint. I chose that title because a flash point is the temperature at which something catches on fire. This recording is going to be the start of great things for us. The CD will be released on May 1, 2011.

Also, I'm forming my own independent record company, Mister Shepherd Records. We'll officially begin operations on May 1st to coincide with my album's release date. I'll be looking to sign like-minded artists to my label in the near future.

If I weren't a jazz musician, I would be a: A diplomat. I've always been interested in politics and world affairs. The idea of working to further the cause of peace appeals to me greatly.