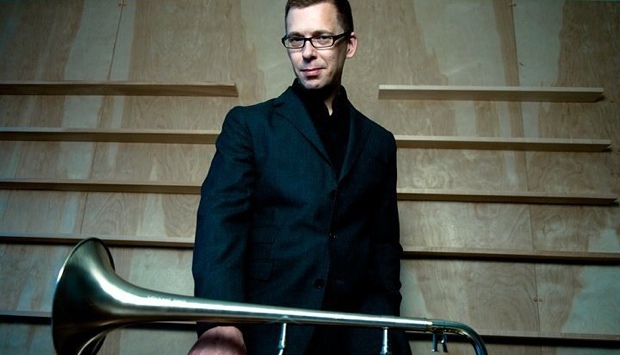 By DAVID GIBSON
June 14, 2011
Sign in to view read count
Meet David Gibson:
Trombonist David Gibson has enjoyed a varied musical career which is deeply rooted in the genres of jazz and funk. While reared in Oklahoma, Gibson's musical journey steered him to New York City. Jazz luminary Curtis Fuller said about Gibson, "Out of all the young players I hear in the music today, David is one of very few who speaks the language of jazz."

David's newest recording, End of the Tunnel, is currently available from Posi-tone Records. It's a set of music that evokes the essence of '60s Blue Note soul-jazz in combination with the modern elements you'd expect from today's current crop of jazz musicians. The mixture of trombone, alto saxophone, organ and drums presents the listener with an assortment of sonic moods while staying grounded in the fundamental groove and swing.

Gibson's early experience in New York had him performing with Slide Hampton, Jon Faddis, Roy Hargrove, Jimmy Heath, James Moody and others. In 2003, he was a finalist in the Thelonious Monk International Trombone Competition, and subsequently released several recordings, as a leader. Posi-tone's 2009 release, A Little Somethin', marked the debut of David's current ensemble with organist Jared Gold, saxophonist Julius Tolentino and drummer Quincy Davis. Though Gibson's compositions make up the bulk of their music, this eclectic group's repertoire also runs the gamut with arrangements of material from Wild Bill Davis to Carole King.

David is busy performing with and composing for many diverse artists in New York City, including Roy Hargrove, Orrin Evans, George Gee Swing Orchestra and Nickel, in addition to teaching at SUNY Geneseo and Columbia University. Legendary trombonist/composer Slide Hampton says, "David Gibson is one of the very talented, truly dedicated musicians on the New York scene today."

I knew I wanted to be a musician when...
I was 13 years old and attended a summer jazz camp at my high school. At the time, I was assessing my interest in music and had considered dropping my musical pursuits, but was shocked when I heard the jazz ensemble at my high school playing at a very high level. Music had always played a significant role in my life, but the melodies and rhythms of jazz inspired me to continue and commit more deeply. That kid would be pretty happy with the results. I should consult him more often.

Your sound and approach to music:
Music has to feel good....has to feel sincere and authentic. Time is the main ingredient and voice is the tool.

Your teaching approach:
I approach music like dissection. I want my students to understand the constructs of music and have ideas about that so that they may be inspired to communicate those ideas to an audience. With that kind of understanding, they can collect musical vocabulary which will be employed to deliver their ideas to audiences and musicians alike, rather than stringing a bunch of patterns and phrases together that are in search of a unifying idea or principle.

Your dream band:
My ideal band consists of honest humans with a great sense of groove and melody.

Your favorite recording in your discography and why?
End of the Tunnel is my latest and my favorite. I love the eclectic nature of the band....and I just love the cats in the band. We have a ball on and off of the bandstand. This record illuminates that to my ears.

The first Jazz album I bought was:
John Coltrane, My Favorite Things (Atlantic).

What do you think is the most important thing you are contributing musically?
I am determined to use the trombone to make music. I am dedicated to bringing the trombone back into the minds of musicians and listeners as a valid tool of music, rather than the labels of "clumsy" and "comedic" that it has been tagged with in recent memory.

How would you describe the state of jazz today?
The university environment is an imperfect place to become an artist. It can be a great place to learn how to think, but how does one grade that? So, it becomes a place to collect information...scales, chords, patterns, licks....but these are simply tools with which to communicate ideas. Unfortunately, many young musicians know little of ideas and lots of patterns and flash their patterns to audiences and one another in search of recognition. Few are risky enough to say what they really think. But, humans still hear ideas when they're present...they still feel music when there is sincerity. I don't know about the "state of jazz today," but there are embers of authenticity still burning.

What are some of the essential requirements to keep jazz alive and growing?
Study. Dissection. Honesty. Sincerity. Humility.

What is in the near future?
Writing for Roy Hargrove's Big Band, Orrin Evans' Captain Black Big Band and George Gee's Orchestra. Performing with my Organ 4tet and also doing some "jazz meets hip-hop" gigs with Nickel and Dime Ops. Working hard.

If I weren't a jazz musician, I would be a:
Sociologist.