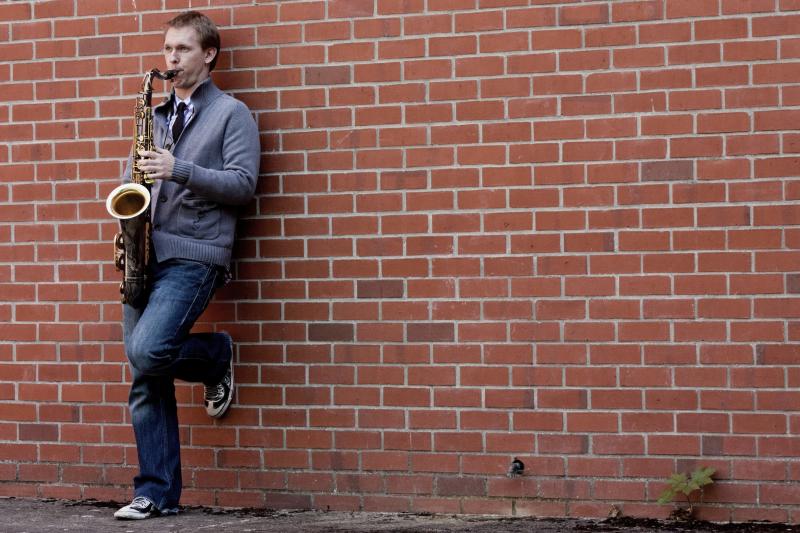 By DANIEL MEINHARDT
August 13, 2012
Sign in to view read count
Meet Dan Meinhardt:
Dan Meinhardt is a young saxophonist quickly making a name for himself. He has made appearances with some of the Northwest's finest musicians and has been a first-call player for touring groups and pits.

In June 2012, Dan released his first album, Gone West. It contains eight original compositions and features some of the best musicians from Chicago, San Francisco and Oregon.

Dan attended Lawrence University and earned a Bachelor's degree in Saxophone Performance, graduating in 2010. After receiving a Masters in Jazz Studies, Dan returned to the Midwest and is establishing himself in Chicago as a performer, educator and composer.

Teachers and/or influences?
There are so many great teachers I've had the good fortune to work with. The three most influential each mark a turning point in my career. David Bixler was one of the first jazz musicians to push me down this path. His approach was one of practicality and had a very old-school approach: listen, listen, listen. I still go out and see Bix any chance I get and I love hearing all of the new music he releases.

Fred Sturm was a big reason I went to Lawrence U. He helped me find my voice in a time when everything was constantly changing. He also pushed me down the composer's road. When I started my graduate work, Steve Owen at U of O became my mentor and a great friend. Steve is accomplished as a saxophonist, composer and educator—all of them at a world-class level. In addition to the great educators I've worked with, my influences keep coming from my record collection. Joe Henderson, Sonny Rollins, Michael Brecker, Joe Lovano, Joshua Redman, Donny McCaslin and Walter Smith III have remained some of my go-to players when I need inspiration.

I knew I wanted to be a musician when...
I grew up in a musical family—my dad was a band director for years, and my mom was in musical theater. Listening to the radio and records all the time definitely pushed me in that direction. I remember a conversation with a friend in seventh grade, where we both decided we were going to be musicians. We didn't know what we would do, but we'd have something to do with music for our lives. I was one of those kids that just had to play saxophone all the time. Looking back, that hasn't changed.

Your sound and approach to music:
I just really love good music. I'm not trying to make any profound statements about jazz or music as a whole in my writing or playing, I'm just trying to make something that speaks to my audience. Whether that means a folksy melody or some kind of heady super-jazz tune, I want it to convey something to my audience. If it feels and sounds good, I feel like I've done my job as a musician. My sound reflects a lot of darker-toned tenors: there's some Henderson, Lovano, Stan Getz, and Redman in there. I do my best not to emulate to the point of copying, but my sound has a slight chameleon-like quality to fit the right vibe of any setting.

Your teaching approach:
I've had the good fortune of teaching a wide variety of students, and my approach has been shaped by all of them. I make all of my students improvise, jazz or not, from a beginning level on. Improvising forces you to make fast, musical decisions that inform how you can approach anything else. There's definitely focus on technique and fundamentals, but I won't ever assign something unless it has a practical application. I also incorporate transcription into all lessons. In classical and jazz playing, it's so important to hear how the greats on your instrument perform, whether it's Coltrane burning on "26-2" or Nobuya Sugawa tearing up "Tableaux."

Your dream band:
The band I had on my record is pretty close to an ideal band for me. The guys were all enthusiastic about playing my material and had great input for everything, stretching my head in different directions. I'm more curious about finding as many different musical situations as I can to play in. Different instrumentations, styles, and cultures all fascinate me, and I'd love to experience as much as I can. It'd be amazing to work with Miguel Zenon and Wynton Marsalis someday. Playing with the Village Vanguard Orchestra would be nice too.

Road story: Your best or worst experience:
I was flirting with a girl at a bar before going on with my band in Eugene, and mentioned that it was my band going on next. She asked what type of music we were playing. I told her it was "kind of like jazz, but more fun" and that she should come up with a better description and tell me after our set. I never saw her again.

Favorite venue:
I got to play at The Jazz Station in Eugene, OR a lot while working on my Masters. That place is great; small, but enthusiastic crowds every time. You can go in and play a small group, straight-ahead set one night, then go in the next and play a show of Nine Inch Nails covers, and the audience will be into it both nights. Such a great volunteer-run organization that really keeps improvised music alive in Eugene.

Your favorite recording in your discography and why?
Gretchen Parlato, The Lost and Found. I love vocalists. They give a different kind of life to music that instrumentalists just can't do. That album was the soundtrack to my summer in grad school. The music is consistently great throughout, and the players are amazing. There's a great pop vibe on the album that makes it approachable for non-jazzers, but there's enough headiness in the arrangements and playing for the most geekified jazzer.

The first Jazz album I bought was:
Cookin' With the Miles Davis Quintet.

What do you think is the most important thing you are contributing musically?
Sincerity. I know there's nothing technical about what I do that hasn't already been done or isn't being done better somewhere else. What I do know is that every time I get on the bandstand, I guarantee my audiences a good show. I don't ever let myself phone in a performance and I keep reaching for that next level. There are a lot of musicians I know that will simply settle for an off night because they're tired or have something early the next morning; I'm not that player. I give my best effort each time I step on the stage and my audiences can always recognize that effort.

Did you know...
I was once shamelessly propositioned in a coffee shop while I was working.

How would you describe the state of jazz today?
The state of jazz is great! There's so much creative music happening, and so many great players doing creative things. Does it all translate to audiences? Maybe not, but the music itself is amazing. There's already a big shift in audiences that leads me to believe we as a jazz community just need a good publicist. The music is happening already.

What are some of the essential requirements to keep jazz alive and growing?
We need to make sure venues make it accessible to the audience and financially sustainable to artists. Artists also need to be willing to work. I remember reading an interview with Ron Carter where he said something like (I'm paraphrasing here) "Kids today are soft. I remember coming up, playing three shows a night, and really trying to make it happen each time." Granted, there aren't as many venues as there were, but the opportunities are there if you're willing to work.

What is in the near future?
I just released my first album, a collection of music I wrote while on the West coast. After graduating I moved to Chicago, where I'm working on setting up a regular gig with my band from the album and getting more sideman work.

What's your greatest fear when you perform?
That I'm wearing the wrong shoes.

By Day:
My day job is to promote my night job. I'm a musician through and through. Everything I do I try to fit into the world of making more music.

If I weren't a jazz musician, I would be a:
Executive chef. Five-star restaurant. I love to cook.