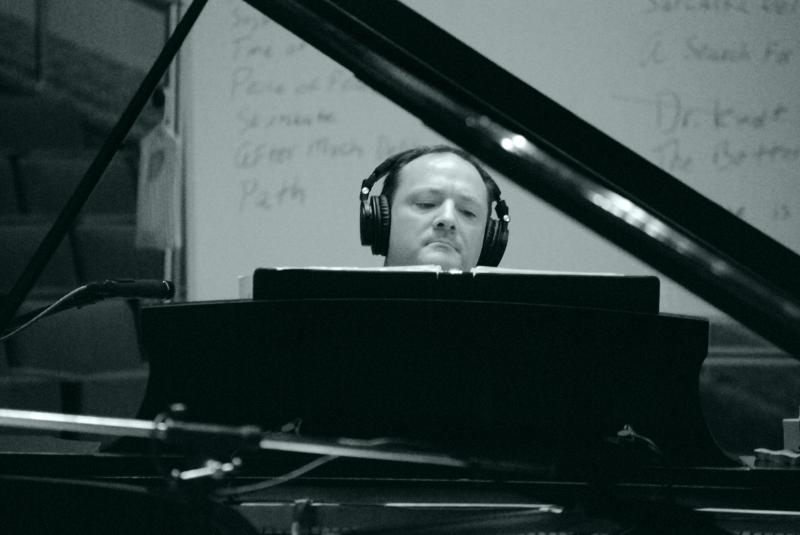 Dan DeChellis' music consists of melody, emotion, energy, and spontaneous adventure. Born on classic rock, schooled in classical music, matured on jazz, and aged with ambient music, DeChellis is a fan of all music and styles. He has released over eight albums of purely improvised music on his own label, Sachimay Records. He is also a member of the Hassay/DeChellis/Nakatani Trio, which has released two records on the German label, Konnex Records. DeChellis is also a member of two rock bands (Roi & The Secret People and Four The Day) and a professor of music at Moravian College where he directs the improvised music ensemble.

I bought Paul Bley coffee for a year and learned a lot through his amazing stories. I've been falling asleep to Ambient 1: Music for Airports (Astralwerks, 1978), by Brian Eno, for the past 25 years. My favorite rock record is Laughing Stock (Polydor, 1991). By Talk Talk. Other influences are George Winston, Bill Evans, Chick Corea, and Keith Jarrett.

I was about five years old when a friend of my grandmothers played some of Scott Joplin's rags for me; I knew then I wanted to play the piano. Quite honestly, I never really thought about it, it was all I was ever good at and I knew that music was what I was going to do.

Melody and harmony. I tend to write from an emotional standpoint. I like my music to have a personal meaning to myself as well as draw an emotional response from my audience. My last few records have dealt with very specific events in my life. I see no reason to compose complicated music when—in the end—it's about the live improvisation amongst the players I am working with.

I'm not sure I have a philosophy for teaching. I think in the end I try to teach from my own experience and instill the tools that will help a student make a living as a musician.

I would have loved to record with Paul Motian. His playing on the Paul Bley Quartet (ECM, 1988) record with John Surman and Bill Frisell is just sublime. As far as bassists, I would have to say my current bassist, Scot Hornick, is pretty amazing.

I was once playing a local date, we were in a pretty intense part of "Footprints" when my light went out, I kept playing, and then all of a sudden my bench collapsed and down on the floor I went. I kept on playing, got to the end of the tune, and my light comes back on. The place went crazy!

I think Strength and Anger is my best playing and writing so far.

I think my music blends genres that may not normally mingle like ambient, rock, classical, improvised music, and jazz. I have been lucky enough to be involved in many different types of music and I think they each influence each other.

I've been brewing beer for eight years and I do all the cooking at home.

I think jazz and its definition is changing and embracing many other genres and sounds. I think it's very exciting!

Open-minded music fans and a supportive live music scene. In the end, we don't survive on CD sales anymore because it's all about the live gigs.

I just released a new trio CD, Strength and Anger. I am currently busy booking and promoting the record as well as getting out and gigging as much as possible. I am hoping to record again sometime this fall.

Saying something stupid between songs.