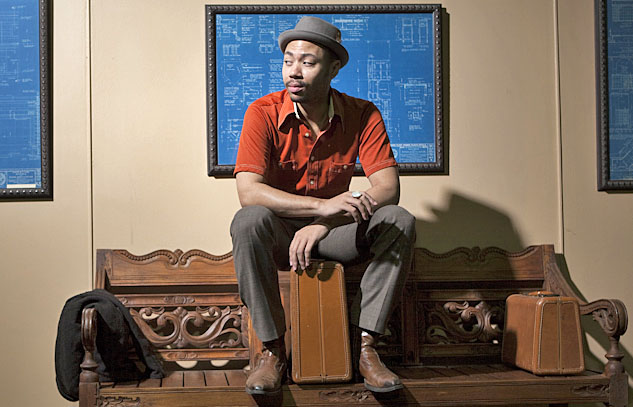 By DAMON K CLARK
June 8, 2012
Sign in to view read count
Meet Damon K Clark:
Born in Los Angeles, California, Damon K. Clark was raised by two musically eclectic parents. His mother enjoyed the sounds of Motown as well as musical theater, while his father was partial to jazz and classical music.

From an early age, Clark exhibited artistic talent in several mediums such as drawing, painting, wood work, sculpture, fabrics, as well as landscape design and architecture. However, his passion was always music. Clark started voice lessons very early in life with Barbara Bennett, who taught him the fundamentals of classical vocal production. "There isn't a time I can remember when I didn't sing," says Clark.

At the age of 16, Clark began to study with a jazz saxophonist and vocalist named Charles Cooper, an experience that would change his perspective on music forever. At first, Clark was actually resistant to the idea of singing "black" music. He was under the impression that it would damage or ruin his voice. Clark explains whimsically, "It was my mom's younger brother's idea that I study jazz or R&B. My uncle actually told my mom that he was afraid I would never develop 'black voice.' That horrified my mother, since she loved the music of Motown. See, my mother has a beautiful light soprano voice, kind of like Snow White, but she wanted a more 'ethnic' sound. I guess she was trying to spare me her 'fate.'" Clark's teacher was both patient and cunning, and finally persuaded Clark to study jazz with an open mind. It took no less than three weeks, but Clark began to ferociously consume any vocal jazz he could get his hands on.

He has performed many a duet with Grammy winner Andrea Wallace, been accompanied by Grammy winner Bobby Sparks and recently opened for seven-time Grammy nominee Paula Cole. He has also been accompanied by notable artists such as pianist, writer and producer Caleb Sean McCampbell (who produced Beyoncé's "The Best Thing I Never Had"), former Miles Davis and Chaka Kahn pianist Bernard Wright, and writer/producer Linny Nance, just to name a few. Clark has also appeared at premier venues such as the historic Kessler Theatre and the newly constructed Winspear Opera House to critical success.

Clark's latest independent release, Damon K. Clark Live at the Kessler, Volume I is a great introduction to the singer's artistry. Culled from several cabaret-style performances at Oak Cliff's Kessler Theater—with a stellar cast of supporting musicians, including Caleb Sean McCampbell, Asher Barreras, Justin Heaverin and Neeki Bey—Clark is in rare form throughout, from ballads to up-tempo songs.

While his tessitura and timbre could be described as Bobby McFerrin-esque, his approach to the material is unique. Clark's scatting in particular exhibits a classical precision, while hinting at his affection for Ella Fitzgerald and Mel Torme's improvisational skills. But Clark's virtuosity never gets in the way of a song's meaning; he cites, as an influence, legendary Belgian singer-songwriter Jacques Brel for his "ability to deliver a lyric where it's emotionally potent." Clark's takes on the Gershwins' "They All Laughed" and "But Not For Me" are highlights, showcasing his astonishing range, playful scatting, melismatic mastery and elastic phrasing.

Clark has mostly devoted his time and energy to educating vocalists at the Damon K. Clark Vocal Studio. Although Clark is an infrequent performer, his concerts announcements are always greeted with a high level of anticipation and enthusiasm.

Teachers and/or influences?
I originally studied classical music and was intent upon embarking on a career as an opera singer. However, my mother, at the urging of her younger brother, decided that I needed to be exposed to "black" music. So, around age 16, I started studying with Charles Cooper. He was a jazz saxophonist and vocalist.

I knew I wanted to be a musician when...
From the earliest time I can remember, I truly always knew that I wanted to sing professionally. I never doubted that it was what I wanted...ever.

Your sound and approach to music:
I'd like to think my sound is the balance between instrument and human. I don't want to sound too instrumental (mechanical), but I don't want to sound too human either (lack of technicality). I believe my sound is warm yet bright, with a slightly dark core. I strive for the roundest tones possible like a woodwind.

Your teaching approach:
I believe strongly in the power of a good classical base and approach to singing/musicianship. However, I believe that technique should be able to serve all musical styles. I definitely augment my approach to cater to my students' specific strengths. One's voice will tell him/her where they fit into the musical tapestry.

Your dream band:
I'm so happy that I've been able to work with some of the most beautiful musicians I could have dreamed. I've had the pleasure and privilege to work with Caleb McCampbell, Bernard Wright, Linny Nance, and Bobby Sparks.

Favorite venue:
I love both the Kessler Theatre and the Winspear Opera House. They are possibly my favourite venues. The acoustics are glorious in both places. The Kessler is a small, intimate venue with a phenomenally listener-friendly ambiance. The Winspear, by contrast, is a huge (brand new) opera house. The acoustics are, of course, phenomenal. Besides that, it's a treat to be in an opulent space like that.

Your favorite recording in your discography and why?
I believe my favorite recording of the moment (because there's so much fabulous music) is George Souzay's recordings of Duparc art songs. I still consume a huge amount of classical vocal music. I think it informs my jazz interpretations in a very meaningful way.

The first Jazz album I bought was:
I bought a Sarah Vaughan compilation and a Carmen McRae album, singing Monk tunes. Heaven!

What do you think is the most important thing you are contributing musically?
As one who trains vocalists, I believe far too often the level of musicianship is lower among vocalists. That is not to say that they lack musicianship from a theoretical standpoint. Vocalists often lack the ability to execute/use their vocal instrument at a high level, like their external instrumentalist counterparts. I try to bring the highest level of vocal skill, dexterity, color, flexibility to my interpretations so that there isn't a gap between the musicians and me. I also put a great deal of effort into helping other vocalists do the same thing.

How would you describe the state of jazz today?
Jazz is certainly not dead. It was headed for the nursing home at one point, but young people...teenagers...have taken up this music with a gusto I certainly didn't see when I was in my teens.

What are some of the essential requirements to keep jazz alive and growing?
Youth involvement, period. If you want to keep anything alive, it must be injected with youth. Young people have to enjoy, participate, and be allowed to push jazz to the next level. That's what was happening in jazz's infancy and adolescence. I'm not much of a traditionalist because I do believe traditionalism stagnates growth. The excitement of youth causes evolution. That's what I believe we need to nurture.

What is in the near future?
I am actually going to record some French jazz tunes with a wonderful classical/Latin guitarist, Michael Henry Tillman. We are working on some original Spanish and Portuguese jazz works as well. I've also got a classical French and German art song album on the way. I'll also be producing a highly interactive classical and jazz concert series soon.